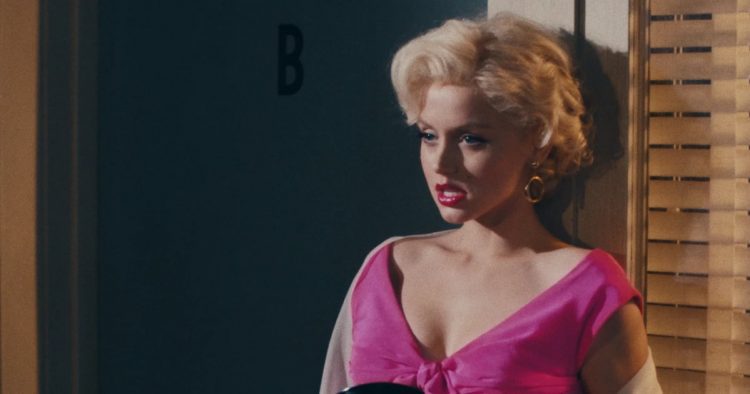 Ana de Armas is starring as Marilyn Monroe in “Blonde,” a new Netflix film from director Andrew Dominik, and it’s already making headlines. The forthcoming biopic, based on Joyce Carol Oates’s 2000 novel of the same name, is a drama that reimagines Monroe’s life as a Hollywood icon — which recalls her volatile childhood, rise to fame, and romantic woes.

Netflix shared the first teaser trailer for “Blonde” on June 16, which showcases a haunting rendition of “Diamonds Are a Girl’s Best Friend” and de Armas in character as Monroe for the first time.

On July 28, the streaming giant released the full “Blonde” trailer — which includes a brief look at Bobby Cannavale as Joe DiMaggio — and, in it, de Armas’s Monroe struggles to figure out where Norma Jean ends and her onscreen persona begins. That same day, Netflix also shared new stills of de Armas as Monroe, including shots of her re-creating the star’s iconic pin-up-inspired looks.

Though many viewers are excited to see de Armas step into Monroe’s shoes, others have made comments that the actor’s accent doesn’t quite match the late icon’s breathy voice. However, the official Monroe estate, which has not authorized the making of “Blonde,” did step in to defend de Armas’s casting. “Marilyn Monroe is a singular Hollywood and pop culture icon that transcends generations and history. Any actor that steps into that role knows they have big shoes to fill. Based on the trailer alone, it looks like Ana was a great casting choice as she captures Marilyn’s glamour, humanity and vulnerability,” said Marc Rosen, president of entertainment at Authentic Brands Group — which owns the Marilyn Monroe estate — per Variety. “We can’t wait to see the film in its entirety!”

“Blonde” is set to hit Netflix this fall with an NC-17 rating, the first film from the streamer to receive that designation. Getting an NC-17 rating is usually the kiss of death for a movie’s success, since it limits ticket sales. But since Netflix doesn’t prioritize theatrical releases the way traditional studios do, it seems the streamer is not as concerned.

“It’s a demanding movie,” director Dominik told Screen Daily in February of the movie’s controversial rating. “If the audience doesn’t like it, that’s the f*cking audience’s problem. It’s not running for public office.” He added: “It’s an NC-17 movie about Marilyn Monroe, it’s kind of what you want, right? I want to go and see the NC-17 version of the Marilyn Monroe story.”

Read on for everything we know about “Blonde,” including the cast, release date, and trailer.