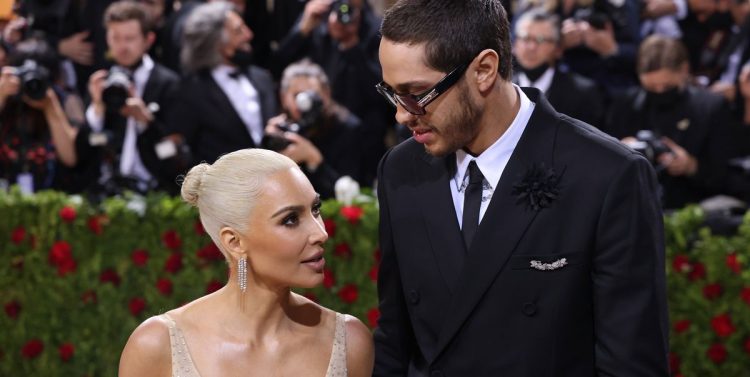 Pete Davidson has been working on a project, Wizards!, in Australia, but rest assured, a source told E!, his relationship with Kim Kardashian is still thriving, despite them being on opposite sides of the globe. The source, who’s close to Kardashian, explained how they’re making the long distance bearable.

“The distance hasn’t been an issue for Kim and Pete’s relationship while he’s been away filming,” the source started. “They are still going strong and making it work.” Part of making it work has involved talking a lot. “When they are apart, they are in constant communication,” the source said. “[They] FaceTime consistently [and are] always getting quick phone calls in when they can.”

Kardashian remains very into her boyfriend of nearly a year. “Kim loves that he’s always making her laugh and he truly makes her day when they talk,” the source said. “She is still smitten over him and it just works for her. Pete plans to come back to L.A. after filming wraps to spend time with her for a few days.”

Kardashian also visited Davidson in Australia too, with paparazzi photos capturing her arriving at Australia’s Queenland airport around July 16. A source explained the visit to E! at the time, saying, “Kim is heading to Australia to visit Pete this weekend. She wanted to spend time with her kids before she left and did some special travel with them. Now she’s off to see Pete and is very excited.”

Alyssa Bailey is the senior news and strategy editor at ELLE.com, where she oversees coverage of celebrities and royals (particularly Meghan Markle and Kate Middleton). She previously held positions at InStyle and Cosmopolitan. When she’s not working, she loves running around Central Park, making people take #ootd pics of her, and exploring New York City.