What’s New to Stream on Netflix for April 2022 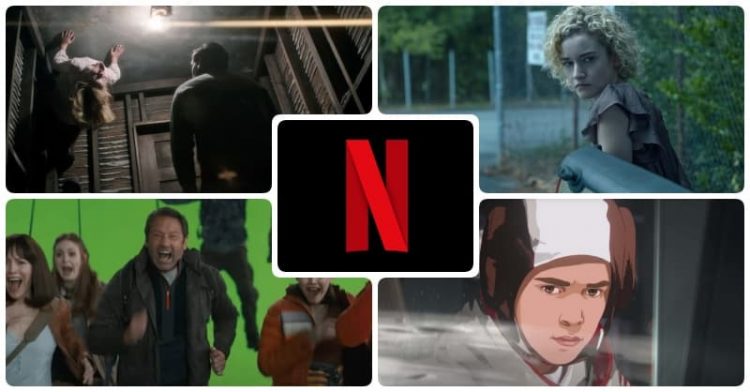 A new movie from Judd Apatow, the return of ‘Ozark,’ and more awaits you on Netflix this month.

Crossing the Streams is a series of columns spotlighting all the offerings hitting the big streaming services each month. This time we’re checking out the new Netflix arrivals for April 2022. They include new movies, returning series, a fantastic horror prequel, and more!

Netflix Pick of the Month for April 2022

When is a horror prequel better than the original feature? When Mike Flanagan is directing and the film is Ouija: Origin of Evil (2016, premieres April 16th). This prequel to 2014’s underwhelming Ouija is far from Flanagan’s most acclaimed creations (The Haunting of Hill House, 2018; Doctor Sleep, 2019; Midnight Mass, 2021), but it remains an absolute banger of a horror film. Flanagan finds the scares the earlier film never dreamt of, and he blends them with real characters, strong performances, and sharp direction. It has some scares, and it’s a terrific horror film whether you’ve seen the original or not. Give it a late-night watch if you somehow missed it. Once upon a time, a new Judd Apatow movie would be big news complete with heavy marketing. These days, though, The Bubble drops on Netflix with barely a whisper. Reviews and responses have so far been mixed, but a new Apatow should at least be worth a watch. The film explores the behind-the-scenes antics of a film production trying to make a high-profile franchise picture during the time of covid. Do we need more covid movies that already feel dated just a minute in? No. But you can’t argue with a cast that includes David Duchovny, Karen Gillan, Rob Delaney, Keegan-Michael Key, Fred Armisen, Maria Bakalova, and more. Here’s hoping it’s funny!

I won’t pretend to know anything about it than what I’m about to relate, but there’s still a good chance that Tomorrow will be a show worth checking out. It’s a new series from South Korea and concerns itself with a young man who finds an accidental entry into the world of the supernatural. He somehow lands with one foot in our world and the other in the spirit realm, and the result is a gig working alongside a wily group of grim reapers who travel around collecting souls. It’s unclear if we should expect laughs or if this is played far more straight, but either way, there’s promise in the premise.

Netflix is home to lots of original films and series, but many of their biggest hits have been of the “true crime” variety. Jimmy Savile: A British Horror Story (premieres April 6th) doesn’t deal with a specific crime, per se, but it does explore the real descent in popularity of a children’s entertainer accused of bad, bad behavior. The famed British comedian led a charmed life, but more and more secrets and accusations reared their ugly heads to paint a portrait of a sociopath who might also be a predatory sex offender. So, no, this won’t be a fun watch, but it might be an engaging and cautionary one. Okay, this is only long-awaited if you don’t have access to the show’s home network, AMC, but for those who fit into that category, Better Call Saul – Season 5 (premieres April 4th) is highly anticipated. Bob Odenkirk plays Jimmy McGill, a character first introduced in Breaking Bad but one who’s found an arguably better series in this one, and the show follows his attempts to skirt the line between success and failure while walking an even thinner one between the legal and the illegal. It’s dark, dramatic, and often funny stuff.

Far removed from Jimmy’s world is the one occupied by two old ladies who became friends after their husbands left them for each other. Grace & Frankie – Season 7 Final Episodes (premieres April 29th) stars Jane Fonda and Lily Tomlin, respectively, and affords the legends some fun material to play around with. They don’t shy away from their aging bodies and minds, and the show manages some minor fun with a game ensemble cast and some solid writing. It’s no groundbreaker, aside from its two leads getting some much-deserved top billing, but it’s a good time.

And just like that, we’re back to the darkness with Ozark – Season 4 Part 2 (premieres April 29th) which foregoes the warm humor of Saul in favor of some truly bleak and mean story beats. A family finds themselves in over their head, but they make the best of it with some grim results. Jason Bateman and Laura Linney star as the head of the household while Julia Garner shines (obviously) as a local girl caught up in their mess. Watch for the cast, then get sucked into the melodrama, story turns, and sudden acts of violence.

The Oldest New Arrival to Netflix for April 2022 Netflix often gets heat for being a streamer almost wholly uninterested in older titles, and to be clear, by “older” we’re referring to movies made before the millennium. It’s not an unfair criticism, so each month I like to highlight the oldest new arrival to show the effort that Netflix is or isn’t making on that front. This month’s contender? Stanley Kubrick’s Full Metal Jacket (1987). Yup, a movie from the late 80s is the oldest new arrival, but on the plus side, it’s a fantastic film. Kubrick’s look at the men and personalities who entered and exited the Vietnam War is a raw, cold, darkly funny exploration of the personalities and mindsets inherent in war, and its observations never get old.

Celeb Five: Behind the CurtainNetflix Comedy

Forever Out of My LeagueNetflix Film

Get Organized with The Home Edit – Season 2 Netflix Series

Today We Fix the WorldNetflix Film

4/15Anatomy of a ScandalNetflix Series

Heirs to the LandNetflix Series

4/22Along for the RideNetflix Film

The Seven Lives of LeaNetflix Series

The Mystery of Marilyn Monroe: The Unheard TapesNetflix Documentary

Honeymoon with My MotherNetflix Film