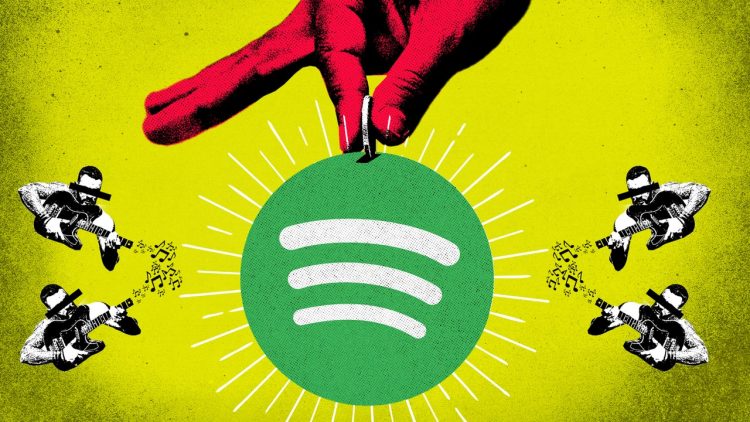 This is a story without boldface names, or at least not the kind you usually read about in Vanity Fair.

And yet it is a story about more than 28,000 musicians and music-industry workers, and some of the biggest corporations in the world.

At the start of the pandemic, when live music had been shut down, a group of independent musicians and music workers started meeting weekly on Zoom to share ideas about what we could do to improve the difficult situation we faced. Out of those meetings grew a new advocacy organization, the Union of Musicians and Allied Workers (UMAW). And among the actions UMAW undertook was a reexamination of the streaming music economy. From the ground up, you might say—how it looks to actual working musicians.

Streaming dominates the recorded music industry—it is now responsible for 83% of all recorded music income in the U.S., according to the record label association RIAA. The remaining 17% includes all other uses of recorded music you can think of: not only physical sales and digital downloads, but soundtracks for films and TV, and licensing to commercials and brands. There simply isn’t much of a recorded music business left outside streaming.

Problem is, streaming hardly pays recording artists. There is currently no direct payment from streaming platforms to musicians themselves, as there is, for example, from satellite radio. The average per-stream royalty paid by platforms to rights holders (i.e., record labels) is $0.007, gross, according to the National Bureau of Economic Research, and record labels generally keep between 50% and 85% of those receipts. As a result, it takes tens of millions if not hundreds or thousands of millions of streams for artists to net anything like a living wage from their streaming work. Many artists see effectively no income from their recordings any longer.

Meanwhile, the streaming platforms themselves are booming—their revenue went up 24.3% in 2021, to a total of $16.9 billion. Paid streaming is dominated by only a few corporations. According to market researcher MIDIA, Spotify is by far the major player with 31% of the market, more than twice that of its nearest rivals, Apple (15%) and Amazon (13%). Add in the Chinese media giant Tencent (13%) and Alphabet/Google’s YouTube subscription service (8%), and you have 80% of all global streaming-subscription income handled by just five corporations, including several of the richest in the world.

Notice that only one of these corporations would even call itself a music business—and that’s probably only temporary. Here’s Spotify’s cofounder and CEO, Daniel Ek, speaking to his investors earlier this year, as quoted by Variety:

“The best companies—think names you are all very familiar with—are vastly different today than when they started,” Ek said. “They made their initial mark in one specific category: books [Amazon], search [Google], desktop computers [Apple]. And they then redefined the way we think about those categories by expanding their potential through innovation…. And this is the exact same journey we’re on.”

Ek’s points of comparison are not random. They are his nearest competitors in American and European music streaming. Spotify’s recent investments in podcasting, sports, and gaming make clear how little music ultimately concerns the company—its corporate statements now refer to “audio” rather than “music.”

In other words, recording musicians have become entirely dependent on businesses that seem to have little to no interest in the future of recorded music. Those businesses are growing while musicians are hurting.