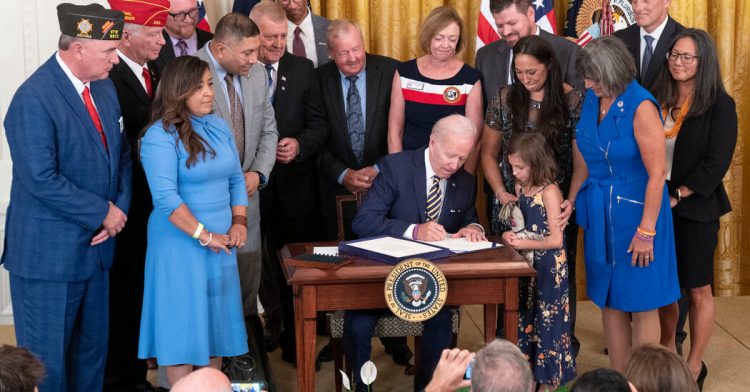 WASHINGTON — President Biden on Wednesday signed into law a bill that expands medical benefits for veterans who were exposed to toxins from burning pits of trash on military bases, ending a yearslong quest for support by veterans and their families.

The issue is deeply personal for the president, who has long speculated that his son Beau developed brain cancer because of exposure to burn pits when he served in Iraq as a member of the Delaware National Guard. Before signing the legislation, Mr. Biden described the lingering effects of the exposures.

“Toxic smoke, thick with poisons, spreading through the air and into the lungs of our troops,” he said. “When they came home, many of the fittest and best warriors that we sent to war were not the same. Headaches, numbness, dizziness, cancer. My son, Beau, was one of them.”

In a ceremony packed with veterans and their families in the East Room of the White House, Mr. Biden called the new law progress toward fulfilling “a sacred obligation” to those who defended the nation and their families. The law passed despite a last-minute delay by Republican senators, who blocked its passage but backed down after an intense backlash.

“This is the most significant law our nation has ever passed to help millions of veterans who are exposed to toxic substances during their military services,” Mr. Biden said, adding a few minutes later: “This law is long overdue. We finally got it done, together.”

The legislation addresses the effects that some veterans have suffered after sleeping and working in proximity to large fires on military bases where trash — including tires, jet fuel, chemicals and other equipment — was burned, creating large clouds of smoke. Research suggests that toxins in the smoke may be responsible for a series of ailments suffered by veterans, including cancer, bronchial asthma, allergic rhinitis, sleep apnea, bronchitis and sinusitis.

The new law, known as the PACT Act, makes it easier for veterans who believe they were exposed to toxins during their service to apply for medical benefits from the Department of Veterans Affairs. The law creates a $280 billion stream of federal funding, making it one of the largest expansions of veterans benefits in American history.

In his remarks, Mr. Biden praised the many years of work by family members and activists, singling out Jon Stewart, the comedian, for his impassioned and sometimes angry demands that politicians pass the bill.

“What you’ve done, Jon, matters, and you know it does,” Mr. Biden said to Mr. Stewart, who was in the room for the signing ceremony. “You should know. It really, really matters. You refused to let anybody forget. Refused to let them forget, and we owe you big, man.”

Mr. Stewart, who has been lobbying for the bill for years, was particularly vocal last month, when Republican senators abruptly refused to support the measure, citing concerns that it was structured in a way that could create a costly new entitlement. The legislation had passed with overwhelming bipartisan support in the House, and the Republican senators who objected had voiced their firm support only weeks earlier.

Appearing on CNN after the Republicans blocked the bill, Mr. Stewart was livid, helping to spur an intense reaction that led to the bill’s final passage days later.

In his remarks on Wednesday, Mr. Biden did not mention the Republican obstruction. Instead, he focused on the bipartisan nature of the agreement, citing its passage as evidence that he has made good on his promise to bridge ideological divides in the nation’s capital to get things done.

“I don’t want to hear the press tell me Democrats, Republicans can’t work together,” he said. “We got it done, and we got it done together.”

Danielle Robinson, the wife of Sgt. Heath Robinson, who died of lung cancer after serving in Iraq, spent years helping to lead the fight for the new veterans benefits. The legislation was named after her husband.

In her own remarks at the White House, Ms. Robinson described how her husband developed cancer a decade after returning from combat. She thanked Mr. Biden and the other activists for pushing lawmakers to pass legislation that will make it easier to receive medical treatment and benefits after similar exposures.

“So many veterans are still battling burn pit illnesses today,” she said. “Too many have succumbed to those illnesses as well. And I’m honored to be with the father of another military family that understands the ultimate sacrifice like we do — our commander in chief, President Joe Biden.”