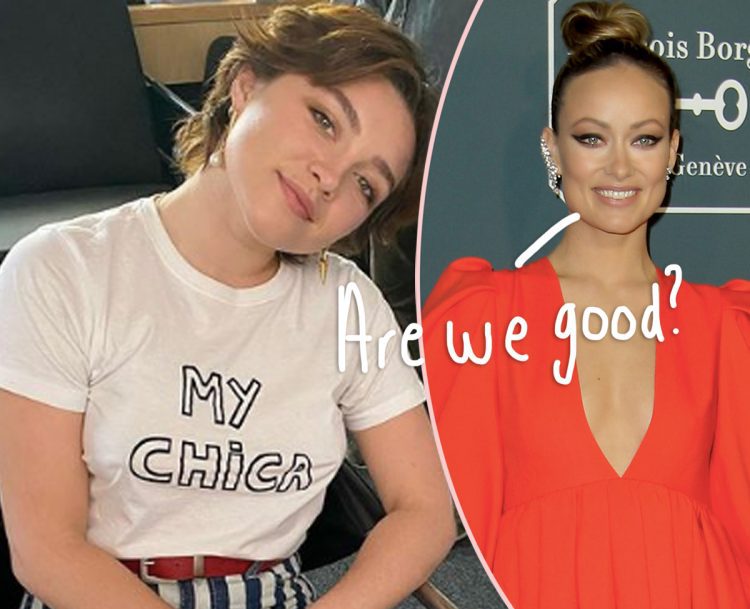 In case you missed it, fans have been speculating for a couple of weeks now that these two ladies have had some beef. A source told Page Six last month that tension between them arose when the 26-year-old actress became “uncomfortable” with seeing Olivia and her boyfriend Harry Styles together on the set of Don’t Worry Darling while she was still with her ex Jason Sudeikis:

“I can tell you for a fact that Flo seeing Olivia and Harry all over each other on set did not go down well as Olivia was still with Jason when she first hooked up with Harry.”

However, people first noticed something might have been going on when the Little Women star never liked a post in which Olivia tagged and praised Florence for her role in their movie, saying that “watching this woman work was such a f**king thrill.” Speculation only ramped up when Florence never shared the trailer for Don’t Worry Darling on social media — instead only posting a teaser for her other upcoming project, Oppenheimer, on that same day.

Well folks, it looks like she has finally decided to acknowledge the film! On Thursday, Florence dropped an eight-second teaser showing her and Harry’s characters snuggling on a bed before the footage suddenly cuts to a group of strange figures creeping toward the camera. She wrote in the caption:

“Not everyone gets this opportunity… Not long now! Only in theatres September 23rd #dontworrydarling”

Why did she all of a sudden post about the film now? Is the feud over? Or is she just completing a business obligation?

What do YOU think, Perezcious readers?