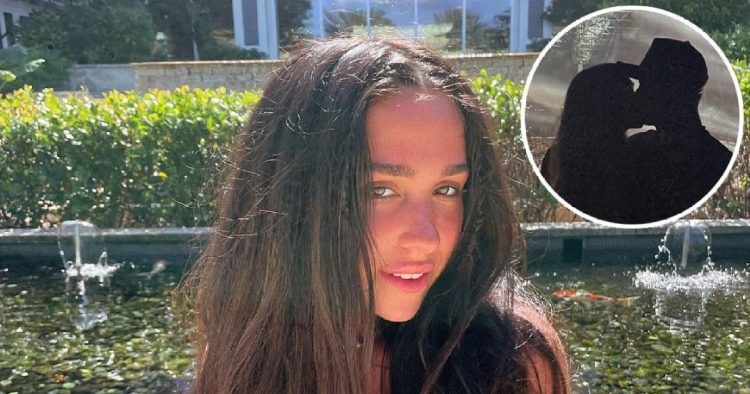 Who is Ariana Biermann dating? She shared an Instagram photo of her kissing a mystery man on Sunday, July 3, as the two were seen in the shadows at a concert as Ariana announced in the caption, “Glimpse of us.” The Don’t Be Tardy star didn’t tag her new sweetheart, but fans seem to believe she’s back with her former boyfriend Hudson McLeroy.

When Did Ariana Biermann and Hudson McLeroy Date?

Ariana, 20, dated Hudson while she was still in high school. She shared an Instagram Stories video of him delivering flowers to her when she turned 17 on October 17, 2018, writing, “Thx for the best birthday lover,” over the Story. Several days earlier, the couple attended their homecoming dance together.

The Bravo star’s mom is definitely happy about her daughter’s current relationship with the mystery man. Kim Zolciak-Biermann wrote in the caption of the new kissing photo, “Get the hell home! Miss you guys.”

When Ariana was previously dating Hudson, Kim gushed over their homecoming photo in 2018, writing in the comments, “Where does the time go?? My angel @arianabiermann is headed to Homecoming with @hudson.mcleroy,” adding, “Are they not the cutest!!?! They are only a few hours apart and will both turn 17 this week!!”

Underneath the new kissing photo, a number of Ariana’s friends and fans were so excited that the two have possibly reunited, with some openly naming Hudson as the man in the shadows whom she was kissing.

Ariana’s good friend Austin wrote in the comments, “Screaming” and added, “ABOUT DAMN TIME,” as the reality star responded with a smile as a reaction. Pal Ethan Zev wrote in the comments, “My mouth dropped,” and Ariana responded, “As it should!” Another friend added, “I love you guys together,” and Ariana responded back, “tyyy babe,” indicating a rekindled romance. Other friends and followers noted, “The best duo,” and “Soooooo happy for YOU.”

What Happened to Ariana’s Romance With Aaron Scott?

Ariana’s last public boyfriend was Aaron Scott, whom she began seeing in 2020. The couple went Instagram official in the summer of that year. While the two kept their relationship fairly private, Ariana and the hunky model were still going strong as of March 7, 2021, when she shared a snapshot of the two kissing and cuddling on the beach.

“Photo dump of me and my best friend,” she captioned the photos. Aaron wrote in the comments, “I love you so f—king much,” to which Ariana replied, “I love you most.”