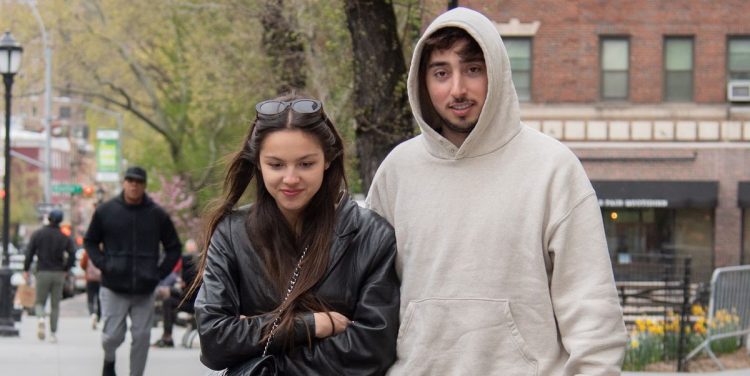 Ahead of the 2022 Met Gala, Olivia Rodrigo sparked dating rumors again when the singer was seen out in New York City with 25-year-old DJ Zack Bia. A source told E! that the two have been spending time together and having “a lot of fun.”

“Zack [feels] that Olivia is really down to earth and he loves how low-key she is,” the source said. “It’s a good balance between them.”

On June 21, 2022, People confirmed that Rodrigo and Bia were officially dating and had been for months. “They’ve been dating since the Super Bowl,” a source said. “They really like each other.”

Then, in August of 2022, it was reported that the relationship had ended. So who is Bia and what is his history with Rodrigo? Here’s all we know so far.

Rodrigo and Bia started “casually hanging out” in February 2022.

Rodrigo previously dated Adam Faze until January 2022. A month later, Rodrigo and Bia were seen together around the Super Bowl, which took place on February 13. They have been “seeing each other” more since then, a source told E!.

“He invited her to Super Bowl parties that he was DJing that weekend and she went to support him,” the source said. “They hit it off and have been casually hanging out.”

A source told People on June 21 that Rodrigo and Bia actually started dating at that time. “They’ve been dating since the Super Bowl,” the source said.

In April 2022, Rodrigo and Bia were still having “a lot of fun” together and making things work when they can with their busy schedules.

While Rodrigo and Bia travel a lot for their jobs (Rodrigo, particularly, is on tour), a source told E! they’ve “made the effort to stay in touch and spend time together when possible,” the outlet wrote.

They mesh well, the source said, adding that “Zack [feels] that Olivia is really down to earth and he loves how low-key she is. It’s a good balance between them.”

Rodrigo and Bia were photographed together in New York City on April 25.

Further fueling romance rumors, Rodrigo and Bia were photographed leaving Bar Pitti on April 25. The photo agency noted that Rodrigo and Bia had hung out for the past few months, posing together at Rodrigo’s 19th birthday party in photos. See the photo of their Bar Pitti outing above. 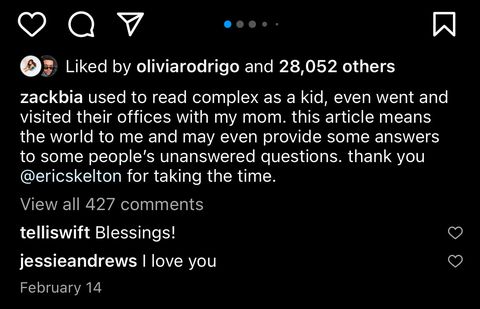 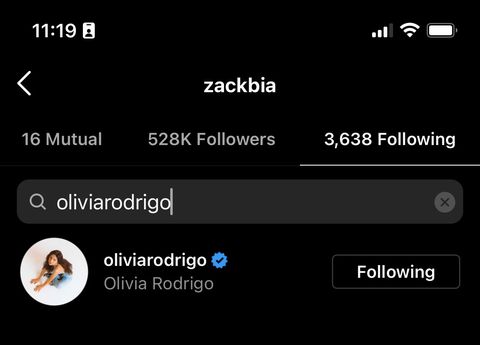 In late June 2022, a source told People that Bia and Rodrigo very much have feelings for each other.

A source told People simply that the private couple began their romance in February. Now, four months in, “they really like each other,” the source said.

Rodrigo is not Bia’s first high-profile potential partner. Bia was with singer Madison Beer for nearly one year until March 2019. Beer confirmed their split herself on her Twitter and alluded to their being major drama between them in a series of tweets. “Before you diagnose yourself with depression and anxiety make sure you’re not just surrounded by assholes and people who don’t care about you,” she wrote. She added, “oof i rlly owe myself the biggest apology for puttin up w shit i never deserved.”

Bia was born in New York and moved to Los Angeles for high school. He went to USC for college and became a nightclub promoter while there.

As Bia explained to i-D in July 2020, “My parents are from Paris, but I was born in New York, and when I was twelve or thirteen I moved to Los Angeles with my mom and brother,” he said. (Bia’s parents got divorced when Bia was 9.) “My mom was a modeling agent and she worked in fashion—we didn’t have a lot of money but I grew up with some really cool stuff. She made me listen to music, took me to museums, and taught me so much.”

“When we moved to L.A., it was a bit more difficult and I had to do things for myself,” he continued. “I was very lucky though, I was sent to a good public school and when I was 18, by chance, I had the opportunity to work in a club. It was a way that I could start paying for things myself. During the day, I went to school and then I worked at night. I kind of had a double life.”

He credited H.Wood Group owner John Terzian for really making his career. “I saw him as a mentor, and I became his right hand when I was nineteen,” he said. “We grew stronger together. I showed him the new stuff that I thought was cool, he introduced me to his older contacts and then we opened Delilah. That’s when everything changed. Delilah is to LA what Chiltern Firehouse is to London. It’s not a club, there’s no who’s-who, no promoters; it was just John and I handling the reservations with our team, and we created a restaurant where people wanted to stay after their meals.” (Delilah is a major celebrity hotspot to this day.)

Bia is close friends with a lot of young Hollywood, including Kendall Jenner (who regularly likes his Instagrams) and Drake.

In his June 2020 GQ profile, the outlet wrote that during Bia’s first club visit at 19, Bia and his friends were invited by Fetty Wap to join him because Bia is also a Gemini and had a birthday that month. “I’m at a table, drinking with Fetty,” Bia recalled. “For me, it’s so surreal at the time.” A club promoter thought that Bia could get Wap to come back to the club. That opportunity opened to door that led to Bia becoming a club promoter himself in L.A. and really building a reputation for himself and the interest of celebs.

When working at Blind Dragon, “we were bringing these parties back where it was like the actors, the skaters, the models, the college kids, they’re all in the same party together,” Bia recalled. “That wasn’t how clubs in L.A. were being run. We were just doing it because we thought it was cool, we thought it was fun.”

When Rihanna came one night, “everyone started showing up,” he said. Of the parties he was known for throwing then at the club, he said, “Kacey Musgraves and Kendall and Kourtney and Kylie are in a booth, while me and Luka [Sabbat] are on the mic and DJing. And Baby Keem and Dominic Fike are at the bar. It’s like, everyone’s there. [And] Drake’s walking in the back.”

Of how he is able to build deep friendships, Bia told Complex in February 2022 that he has a natural desire to understand everyone. “I have a genuine love for finding out how someone grew up: ‘What do they like?’ Oh, shit, we like the same things! I love piquing genuine interests, building those friendships, and introducing friends to friends. It only gets reciprocated,” he said.

Bia spoke to Cool Hunting in June 2021 about running the business. “Now we’re experiencing a time where the barrier to entry to the music business is the lowest it’s ever been,” he said. “Anyone can record a song from their living room and put it out. That over-saturation of music, it’s a good thing. Now it’s become, ‘How do you break an artist digitally?’ So there are all these new challenges that we never even thought of because the business was running one way for so long.”

“Part of the reason that we’re building up our own record company is because we don’t have to stick to a traditional model,” he continued. “And I think that’s the opportunity. We’re not reinventing the wheel here. We’re still putting out music. But you can find these non-traditional ways to partner up with artists and empower people in a way that maybe wasn’t thought of before, because it was just so systematic, and so many people at the top were making so much money. Now that barrier’s been broken.”

“There’s no one that’s going to be more in touch with what’s current than the kids that are actually doing it,” he added. “And we have artists that are 17 years old and they’re the most self-sufficient people I’ve ever seen. I signed this kid when he was 15, and he was doing all this on his own from his bedroom.”

Despite rumors, Bia is not from extreme wealth.

In his interview with Complex, Bia addressed the rumor his father runs Dior. “Anytime I do anything cool or accomplish something, it will always get knocked as, like, ‘Of course he was able to do this, his dad does this,’” he prefaced. “But the reason I haven’t even really talked about my dad is because I have such a bad relationship with him that I didn’t want to even talk about him. My dad is a photographer. I don’t even really know where he lives.”

“I’m cool to talk about it now, but it’s been so funny because the biggest thing in my life has been my single mom raising me, and then me trying to accomplish things to help her out,” he added. “She taught me everything and she’s such a beast, and the biggest knock on me is ‘his dad gave him everything,’ but it’s actually the exact opposite.”

With the Dior rumor specifically, Bia’s full last name is Bialobos. “Someone found out my real last name, Googled it, and saw there was someone who worked at Dior who was distantly related to my dad—like two cousins removed from my dad’s side—and was not even the head of it,” he said. “But it turned into, ‘Zack’s dad worked at Dior. Or Zack’s dad runs Dior.’”

Zack Bia and Olivia Rodrigo called it quits in August of 2020.

After just over six months of dating, Olivia Rodrigo and DJ Zack Bia have parted ways, Us Weekly reports. There does not seem to be any kind of dramatic reason behind their split, only conflicting schedules and different directions in their lives.

“Their relationship sort of fizzled,” and insider told the publication. “They were casually dating but haven’t spent time together in a while. There were no issues — they both have different work schedules and different friend groups.”

The singer was seen out on Friday, August 19, going to a concert at the Bowery Ballroom with a group of her friends and appeared to be in good spirits.

Alyssa Bailey is the senior news and strategy editor at ELLE.com, where she oversees coverage of celebrities and royals (particularly Meghan Markle and Kate Middleton). She previously held positions at InStyle and Cosmopolitan. When she’s not working, she loves running around Central Park, making people take #ootd pics of her, and exploring New York City.