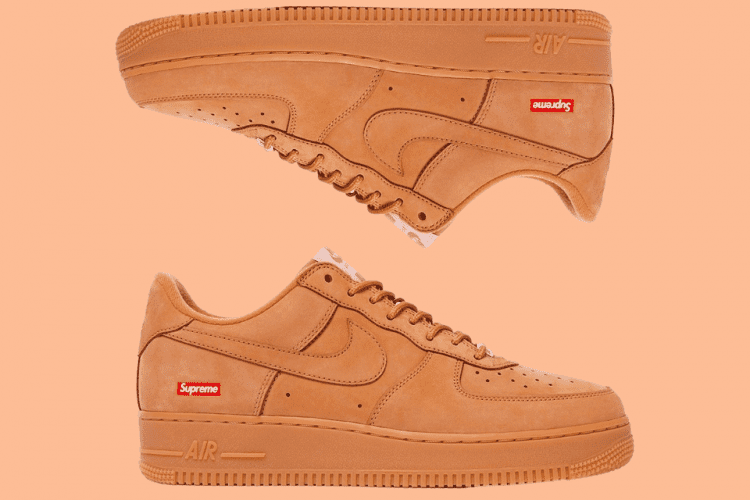 When it comes to low-effort designer collabs, Nike and Supreme rise to the top. Back in 2020, the news of a Supreme x Nike Air Force 1 Low shook NYC until a first look revealed not much of the classic Air Force 1 Low had changed besides alternate Supreme branded laces and small red Supreme Box logos on the side heel.

It was surely giving something. Nothing new, fun, or innovative, but enough to wind up on StockX where all coveted sneakers go and enough for a 2022 re-release. Back like they never left, all three colorways of the Supreme x Nike Air Force Low 1 are reentering the chat for fall. Wave hello again to the Triple White, Triple Black, and Flax colorways set to drop on August 25th.

Both the Triple Black and White styles feature leather uppers, while the Flax iteration is a textured nubuck design. The same Supreme Box Logo branding remains on the side heel, and alternate tonal Supreme-clad laces are available for each colorway.

Supreme’s inaugural FW22 collection on August 25th. However, fans from Japan will be seeing these dSupreme x Nike Air Force 1 Low is expected to resurface on August 25th in conjunction with Supreme’s inaugural FW22 collection. However, fans from Japan will have to wait an extra two days for an August 27th release date.