What’s New to Stream on Amazon Prime for April 2022 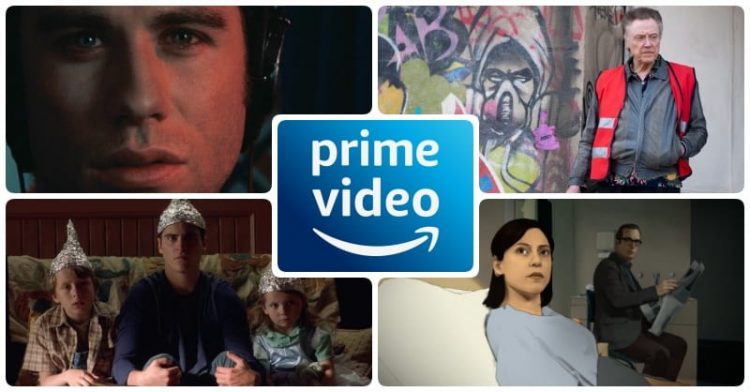 Crossing the Streams is our series of guides looking at all the offerings hitting the big streaming services each month. This time we’re checking out what’s new to streaming on Amazon Prime in April 2022 including new shows, new movies, and more!

Amazon Prime Pick of the Month for April 2022 Some creatives might rest easy and take a permanent vacation after co-creating The Office (2001, 2005) and rolling in the profits, but Stephen Merchant has kept busy over the years with acting, writing, and directing. His latest endeavor, The Outlaws – Season 1, sees him once again share directing/writing duties while also co-starring. The show follows a group of strangers who’ve been assigned community service for various transgressions, and while there are plot threads running through some of their lives, the show’s strength is their interactions with each other. Merchant stars alongside some less familiar faces, but all of them are terrific with the highlight being the obviously very familiar Christopher Walken. He plays an old-school crook, the kind of guy whose blood runs thick with illegal antics, and he is hilarious. There’s heart here alongside the laughs, and it’s a highly recommended watch. Chris Pine has made himself comfortable starring in “smaller” movies that find limited release or streaming debuts (The Contractor, 2022; Outlaw King, 2018) rather than open wide, and that’s not a bad thing. All the Old Knives (premieres April 8th) continues that trend as an Amazon Original, and it looks interesting enough. Pine co-stars alongside Thandiwe Newton as CIA agents who reunite to discuss their past relationship and a mission that might have gone sideways — basically, expect one of them to be revealed as a double agent. The bigger draw here for me, though, is director Janus Metz whose Borg vs McEnroe (2017) remains one of the best films of its release year as well as one of the greatest, most insightful sports films ever made.

Josh Brolin is getting into the Amazon Prime business too with the new series, Outer Range – Season 1 (premieres April 15th). The show casts Brolin as a rancher struggling against all the usual obstacles faced by those still trying to tame the wild and make a living along the way, but a new wrinkle arrives in the form of something… unnatural. He discovers an “unfathomable mystery” that obviously alters the course of his daily existence, and the combination of this cast (Brolin, Imogen Poots, Lili Taylor, Will Patton), this premise, and the promise of a modern-day western make it a must-see in my eyes. All that, plus the always fantastic Amy Seimetz directs two of the episodes!

I’ll be honest, I don’t recall ever hearing about this show back when its first season premiered in 2019, but Undone – Season 2 (premieres April 29th) looks like an interesting watch. It’s animated in the rotoscope style and tells the story of a woman (Rosa Salazar) who comes unstuck after a car accident. She’s visited by her dead dad (Bob Odenkirk), interacts with others (Daveed Diggs, Sheila Vand), and goes on a time-bending journey with a murder mystery at its core. It looks to walk a fine line between the real world and the unnatural one with plenty of room for wonder, warmth, and humor along the way. Brian De Palma may have gotten his start alongside the likes of Spielberg and Coppola, but it’s the latter’s career he seems to be more in line with — his best work is apparently behind him. (Don’t yell at me, I’d love to see him bounce back with another banger, but I don’t see it happening…) Carrie (1976) was both the first Stephen King adaptation and De Palma’s first big hit, and it remains a stellar look at bullying, conformity, and religious fundamentalism. Oh, and telekinetic murders. Sissy Spacek, Piper Laurie, Nancy Allen, John Travolta, Amy Irving, William Katt, and PJ Soles star.

De Palma reunited with Travolta and Allen on the far less commercially successful Blow Out (1981), but the film has only gained in appreciation in the decades since its release. Travolta plays a sound engineer who discovers evidence of a murder on one of his recordings, but the more he digs into it the closer he gets to meeting a similar fate. The film plays beautifully with sound and image to tell a story built on paranoia, conspiracy, and the fear that we’re all just impotent in the face of powerful men in powerful positions. Bleak stuff! M. Night Shyamalan is still making movies, obviously, but the case could be made that Jordan Peele has stepped into some very similar shoes with his two films so far, Get Out (2017) and Us (2019). The marketing for Peele’s latest (Nope, 2022) reminds favorably of a certain Shyamalan film, so with that in mind, we’re recommending a Shyamalan triple feature! First up is the film that made the filmmaker’s name, The Sixth Sense (1999), which tells the story of a boy who can see dead people. It’s a wonderfully haunting slow burn with a fantastic Bruce Willis performance, and even if you know its “twist” going in the movie still holds your attention tightly.

For me and many others, Shyamalan’s best film remains Unbreakable (2000). It once again stars Willis, but this time he’s playing an ordinary guy who’s maybe not that ordinary? He decides to step out of the shadows and help other people making this something of a superhero origin story, and it remains an all-timer with some absolutely chilling, hair-raising sequences of both terror and wonder. Is it another slow burn? Yes, the slowest of burns, but it’s enthralling all the same. Just do yourself a favor and ignore the follow-up that tried to tie it and Split (2016) into a not-so tidy conclusion.

Finally, Signs (2002) is the film that feels like a spiritual ancestor of Peele’s upcoming Nope, and that’s not a bad thing. Mel Gibson and Joaquin Phoenix play brothers dealing with an alien invasion on a local level as the visitors come calling at their remote farmhouse. The plot mechanics can get a bit shaky at times — water?! really?! — but who cares. This movie is a ride with beautifully constructed jump scares, plenty of atmosphere, fun performances, powerful themes, and some memorable set-pieces. Watch it!

The Curious Case of Benjamin Button (2008)

Fighting With My Family (2019)IMDbTV

Invasion of the Body Snatchers (1956)

When the Game Stands Tall (2014)IMDbTV