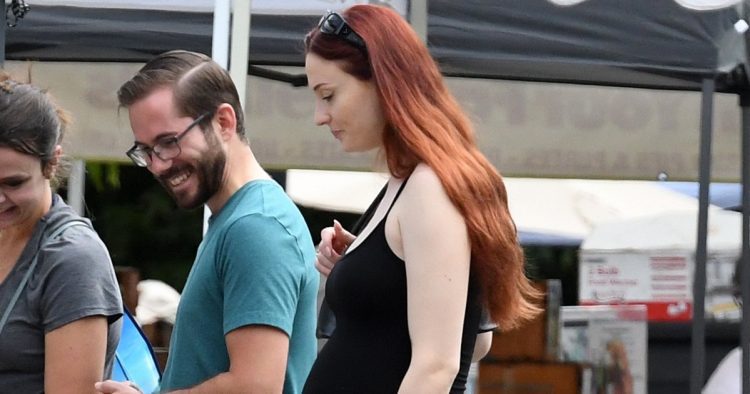 True to Sophie Turner‘s first pregnancy, she and husband Joe Jonas are letting her growing belly do the talking when it comes to expecting baby No. 2. The actress has been showing off her bump in everything from tight minidresses to bikinis.

As In Touch reportedly exclusively on March 1, the couple are expecting their second child. They are already parents to daughter Willa, who was born in July 2020.

Although Sophie, 26, “is proud of her bump,” the Game of Thrones actress is a “private person and won’t make an official announcement about the pregnancy until she’s ready,” said the insider, who noted at the time that “She is almost halfway through.”

Bumpwatch officially began on February 17, when Joe and Sophie were photographed going for a walk and she wore a body-hugging green knit minidress. Her mid-section showed an obvious baby bump, though the two let her growing midsection be the proof that they are having a second child.

A day prior, her outfit showed what a difference a dress can make in hiding a bump. Sophie wore a dark navy dress while visiting friends with Joe and Willa, which camouflaged her bump better than the green number did.

Sophie seemed to officially confirm she was expecting during a February 26 beach outing in Miami, where she wore a tiny light pink and white checkered bikini that showed off her sizable bare baby bump. When seen against the rest of her long and lean body, there was no mistaking that Sophie was pregnant.

After her beach outing rocking her baby bump, Sophie went back to comfortable maternity wear. She donned baggy overalls to go to lunch in Miami with her husband and some friends. The always in style denim look hid her mid-section, but from a side angle when she pulled her outfit forward to cool off, her bump was visible.

During her pregnancy with Willa, neither Sophie or Joe ever officially confirmed they were going to become parents, either through a statement or via social media, and instead let paparazzi photos taken in public of her growing bump tell the story of how close they were to welcoming baby No. 1.

Scroll down for photos of Sophie’s precious baby bump!