‘Margaux’ Has Silly Fun with the Terrors of Technology 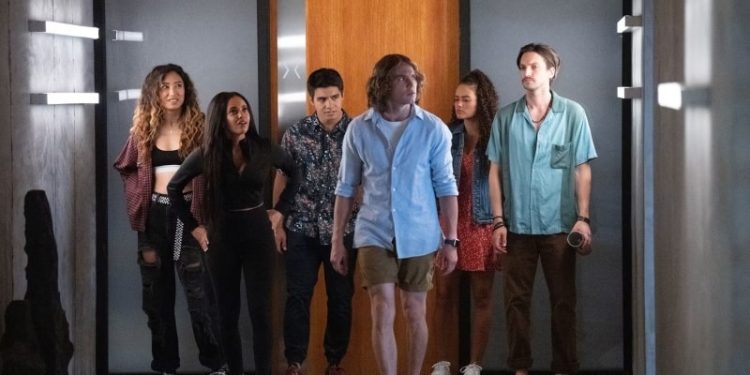 Yet another reason to skip Airbnb and stick with hotels.

Technology remains the epitome of the proverbial double-edged sword as the highs of invention and advancement are balanced out by a loss of privacy, physicality, and effort. From the super-computers in our pockets to the reality that nearly everything is at our fingertips, technology is awesome, until it isn’t. A smart house, one where every whim is just a voice command away, seems cool, but what happens when it becomes smarter than you? Margaux welcomes renters with a digital smile and a personalized room, but while you can check out anytime you like, your ass most certainly won’t be leaving. While 90s kids will see this as the flip side of the Disney Channel’s Smart House, those of us a few years older instead find a comparison to 1977’s Demon Seed. But don’t worry if neither of those references click with you, Margaux is its own thing, an amusing thriller that works better as a comedy than it does as horror.

While everyone else is enamored by Margaux and her weekend of wonders — the A.I. talks like Steve “How do you do, fellow kids” Buscemi, the whole house is one big 3d printer, each room has been tailor-made to fit the occupant — only Hannah is hesitant and refuses to install the necessary app exposing her online world to Margaux’s digital diddling. Her concern is soon justified as Margaux sets about trying to off her guests one by one for reasons unknown leaving the friends fighting for their lives and searching for the power button.

The setup suggests Margaux is a horror thriller about the dangers of technology, but while those elements are evident (read those goddamn user agreements!), director Steven C. Miller wisely embraces the screenplay’s goofier side. The script (written by Chris Beyrooty, Chris Sivertson, and Nick Waters) will leave viewers interested in logic, smarts, and answers out in the cold while those simply up for a fun time will most likely find it. Social media obsessives are lightly skewered, technophobes are rewarded, and barely competent CG runs rampant.

What works best in Margaux are the tone, energy, and cast. Miller’s return to horror comes after a long hiatus in the action world, and he pairs the two genres nicely here as survivors fight synthetic versions of their friends, bodies smash through glass windows, and nano-blood splashes the walls. The film moves at a solid pace, never overstaying its welcome, and the cast is game for the entire ride. The young television stars (Riverdale, Grown-ish, The 100, Chilling Adventures of Sabrina) do good work with Morgan being the film’s MVP. Lexi seems like the film’s most unlikable character from the start, but she quickly grows on you thanks to some terrific sass and pitch-perfect line delivery. Susan Bennett, the voice of Siri and Margaux, is also having fun and earns more than a few smiles and chuckles on her own.

It’s a good thing that Lexi, Clay, and Margaux are as entertaining as they are because they’re fighting against some truly questionable and underwhelming beats. The liquid metal CG is somehow less impressive than what The Abyss or Terminator 2: Judgment Day deliver, and while the budgetary gap between them is immense, James Cameron’s films were made over thirty years ago! The film’s back half also relies a bit too much on synthetic humans — big tech can be unsettling, but these human constructs are anything but. We get a tease of Margaux killing by way of room manipulation (think the likes of Escape Room or Saw), but it’s quickly dropped in favor of people simply fighting. Again, Miller stages and captures the fights well, but audiences can’t be faulted for wanting something more crafty from a smart house horror flick. The film’s opening set-piece remains its best in that regard, and the kills that follow can’t reach that same high.

“Well that’s just fucking stupid,” says a character after Margaux reveals “her” motive, and it’s difficult to disagree. It’s not alone, though, as other bits and beats fight for the title. You’ll get no list of dumb contenders here, but the top spot undoubtedly belongs to our heroes who, upon finding Margaux’s server room — the absolute brain, heart, and guts of her entire being — choose a convoluted option other than simply disconnecting/smashing the hardware. It’s a hair-pulling misstep that instead leads to a somewhat janky third act.

Every house, old and new, has its share of imperfections and builder mistakes, and Margaux is no different. Miller and friends don’t come out the other end unscathed, but they do succeed in delivering an entertaining time all the same. You’ll laugh, you’ll chortle, you’ll wonder why characters aren’t simply leaving out a broken window, and you won’t regret your stay. Just consider this your user agreement…