We Have Some Ideas for Nancy Meyers’s Netflix Movie 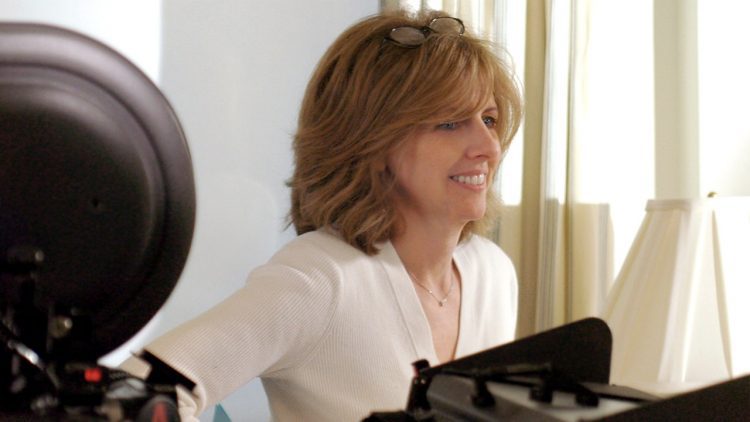 Netflix announced Tuesday that writer-director Nancy Meyers—the visionary behind Something’s Gotta Give, It’s Complicated, and other glossy romantic comedies—will make a new film for the streamer. What could this secretive project be? We’ve come up with five possibilities.

When famed cookbook editor Delia St. James (Annette Bening) heads to Paris in February of 2020, she thinks it’s just for a short trip to meet with a potential author, Millennial French culinary maverick Angeline Tournay (Titane’s Agathe Rousselle). But when the pandemic halts all travel, Delia is indefinitely stranded. Which leads her to a crazy idea: what if she just stayed in Paris forever? Much to Delia’s surprise, she soon finds herself relying on the company of Angeline and her impossibly chic, and annoyingly young, cadre of international friends: art dealers, fashionistas, and activists who seem to speak an entirely different language—other than French, that is. As the months, and then years, go by, Delia realizes you’re never too old for reinvention, or for romance. Featuring Jean Reno as Léo, an Airbus executive facing an uncertain future of his own; Lauren Weedman as Delia’s sassy younger sister, Marla; Sarita Choudhury as Delia’s best friend from back home who comes for a visit; and a cast of sexy up-and-comers from all over the world, We’ll Always Have Paris is a comedy about shutting down—and then rebooting.

Successful hotel lobby designer Cassie Archer (Angela Bassett) seems to have it all: the perfect Spanish colonial house in West Palm Beach; a doting and recently retired husband, Paul (Laurence Fishburne); and two great kids (Kelvin Harrison Jr. and Zazie Beetz) who have flourishing careers of their own. But then Paul announces that he’s fallen in love with a masseuse, Aylisin (Naomie Harris), whom he met on a fishing trip to the Cayman Islands, and wants a divorce. Paul says he hasn’t been happy for years, and to Cassie’s horror, their kids seem to side with him. Rocked by these sudden life changes and needing some new scenery, Cassie accepts a design job at a tony Aspen resort that’s in the process of rebranding, trading sand for snow with her best friend Marianna (Sonia Braga) in tow. Cassie digs into her work while also meeting cute, or something close to cute, with a faded ski bum, Alan (Pierce Brosnan), who also happens to be the biggest landowner in the area. It’s all making for a perfectly distracting getaway, until Paul and Aylisin and the kids show up to try to smooth things over and prove to Cassie that they can somehow make this newly fractured family work. Checking Out is a winsome romantic comedy about taking a tumble, and then getting right back on your skis.

Julia Yeung (Michelle Yeoh) is pleased with her organized, methodical life. She’s an in-demand psychoanalyst who treats the neurotic minds of San Francisco—sometimes from her plushly appointed home in Marin County, other times at her earth-toned office in the city. When a former client who’s become her best friend, Claire (Susan Sarandon), invites her for a weekend away at the fabulous Sonoma vineyard Claire owns, Julia readily accepts. A widow, Julia sees her kids every couple of months when they’re in town, but otherwise lives a pretty solitary existence—minus, of course, when she sees her patients. So, she’s happy to spend some time with a dear old pal, drinking the vineyard’s signature Chardonnay.

As it so happens, there’s a wedding happening at the vineyard—between another of Julia’s former clients, zillionaire entrepreneur Jake Frist (Richard Madden), and film actor Alton Scott (Colton Haynes). When Julia is at the tasting room having a nightcap, trying not to interrupt the wedding, she inadvertently catches Alton’s tasteful sage-and-eucalyptus bouquet. Julia knows this doesn’t mean she’ll be the next to get married; such an idea is laughable. But Jake, Alton, and Claire feel differently, appointing themselves her matchmakers in San Francisco, Los Angeles, and California wine country. Outwardly embarrassed but secretly intrigued by the idea of destined romance, Julia goes along with their set-up schemes, meeting a host of men from Ken Watanabe’s suave tech investor, Hinata Miyazaki, to Russell Crowe’s Jan Taggart, a Sonoma vintner. Will a full-bodied romance bloom, or will Julia’s dating adventures fail to stimulate her palette? Find out in this delicious comedy, crisp and dry with a few tart notes.

Veteran producer Felicia Martin (Emma Thompson) is on top of the world. The renovations on her stunning Primrose Hill home are finally done, the penultimate series of her hit period romance Exley’s Gate has just premiered to rave reviews, and she’s set to finally start work on her lifelong passion project: a wildly ambitious stage adaptation of Middlemarch. But suddenly a scandal involving Jack West (Jacob Elordi), the hunky young American star of Exley’s Gate, sends Felicia reeling. What’s worse is that Jack begs Felicia to let him stay at her house while the tabloid furor dies down. Type-A Felicia and the vain mess that is Jack badly clash at first, but gradually settle into a wary friendship. Until, that is, Jack strikes up a flirtation with Felicia’s daughter, Cambridge student Poppy (Jade Alleyne), while the three are vacationing at Felicia’s Lake District vacation home. Can Felicia help her wayward star become a better man, while keeping that man away from her only daughter? And what’s to be done about Rafe Moore (Jude Law), the tenacious talent agent who seems interested in more than just pitching his clients to Felicia? The Primrose Path is a very British, and a little bawdy, comedy about the parts of life that just can’t be produced, no matter how hard a six-time BAFTA winner tries.

There Once Was a Man

Celebrated exteriors designer Macy Sharp (Amy Adams)—who has a taste for blue hydrangeas and weathered shingle siding—has her life as neatly ordered as one of her beautiful gardens. A contended divorcée, she spends summers in a cottage in Maine with stunning sea views and enjoys leafy autumns and cozy winters in her meticulously restored Beacon Hill townhouse. But when her old college friend, Columbia sex studies professor Nate Wright (Matt Bomer), asks if she’ll do some work on his summer home in Nantucket, she readily accepts a little disruption. Nate has recently been dumped by his husband, British architect Arthur Conrad (Luke Evans), and Macy expects a week of consoling, catching up, and flower bed planting. But after a few too many dark and stormies one night, Nate makes a move on Macy. She’s shocked. Isn’t he gay? Nate explains that he’s recently come to realize that not only is he bisexual, but that he’s had a crush on Macy since their school days. Does Macy feel the same? She’ll try to navigate the muddied waters of modern dating in this sparkling summer comedy, featuring Lily Tomlin as Nate’s wily mother, Cecilia, and Oscar Isaac as handsome (and pansexual) local woodworker Griffin Ashe.

— Even Before Will Smith, It Was a Strange and Awkward Oscars
— “A Deeply Shocking, Traumatic Event”: The Academy Forcefully Decries Will Smith
— Inside the Vanity Fair Oscar Party
— Marilyn Monroe’s Final Hours: Nuke Fears, Mob Spies, and a Secret Kennedy Visitor
— WeWork’s Adam and Rebekah Neumann: 9 Crazy Real-Life Stories
— Colin Firth and Toni Collette on the New True-Crime Series The Staircase
— Where Did All the Sex Go in Bridgerton Season Two?
— What TV’s Increase in Full-Frontal Male Nudity Really Means
— 15 Oscar-Winning Movies You Can Stream Right Now
— From the Archive: Sandra Bullock, Full of Surprises
— Sign up for the “HWD Daily” newsletter for must-read industry and awards coverage—plus a special weekly edition of “Awards Insider.”