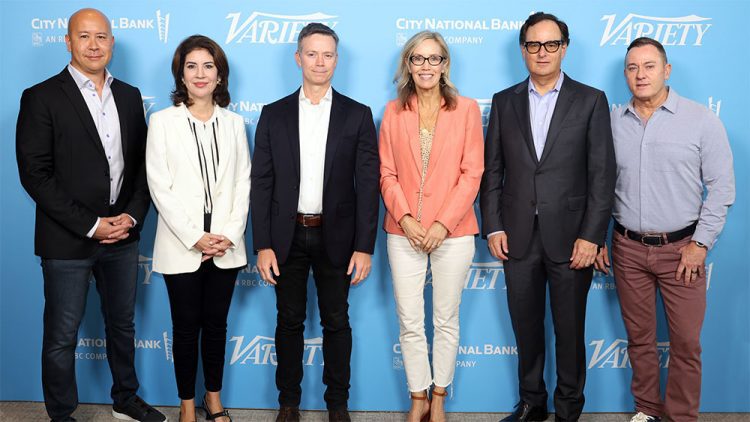 At Variety‘s Entertainment and Technology Summit presented by City National Bank, which took place in West Hollywood on Thursday, entertainment industry executives and visionaries came together to discuss the growth of technology and how it’s affecting TV, film, gaming, music, digital media and consumer brands.

Leaders from brands such as Disney, Universal Television, Mattel, NBA, Twitch, Paramount, Taco Bell and many others took part in panels that highlighted the different ways in which new technology is being implemented in their fields of work. Read on below to see what the entertainment industry’s leading figures had to say about the evolving intersection of entertainment and technology.

During the Titans of TV Programming panel, television leaders discussed their growing footprint in a streaming world that’s moving further away from cable television and closer toward ad-supported, subscription-based streaming services. Dan McDermott, the president of Entertainment and AMC Studios for AMC Networks, said leaders still value creativity in storytelling and intellectual properties with established audiences.

“What’s remained consistent is the value of long-term, high-quality creativity and storytelling,” McDermott said. “It’s a much more crowded landscape than we’ve ever had, but as a programmer, you definitely look for those pieces of IP that have a built-in audience and fanbase.”

Social media is a must-win battleground for brands

At the Brand Storytelling Elite panel, representatives from consumer and entertainment brands talked at length about the best ways to engage audiences in a media environment that often seems oversaturated and cluttered. Nicole Weltman, who serves as head of social media for Taco Bell, talked about competing with established news organizations to attract the attention of consumers.

“When we think about what our content is showing up against, it’s showing up against content from Vice and NBC, places with built-in viewership,” Weltman said. “When we think about what stories we want to tell, we look to those fans to tell their stories and raise their voices.” She then elaborated upon an authentic partnership that came about with pop artist Doja Cat when promoting the return of their Mexican pizza.

Creating immersive experiences can be the future of audience engagement

The Future of Audience Engagement: A Look at How Advancing Innovation and Creativity Is Forging Strong Bonds With Today’s Audiences panel featured a conversation between Omar Zayat, the Senior Director, Head of Industry, Entertainment, Meta; and Keisha Senter, Vice President of Culture and Impact, Monkeypaw Productions, the production company founded by Jordan Peele. The two talked with Variety‘s Heidi Chung about how to further immerse audiences into the worlds of the experiences they create around different mediums like film.

Their collaboration led to a metaverse experience focused on Peele’s new film “Nope,” and Senter highlighted some key questions her team asks themselves when cultivating new ideas and experiences: “We really think about how we’re being elevated. Is our content elevated? Is our content representative? Is it genre-centric? Are we looking at ways that we can be mischievous and fun? There’s just so many ways you can think about that with the filmmakers, but also with the partners you collaborate with.”

Web3 has great potential to beneficially serve the entertainment industry

At the Making Sense of Web3 for the Entertainment Industry panel, industry executives discussed at length the possible ways in which newfound Web3 innovations could bring about better, efficient changes to the entertainment industry. Melody Hildebrandt, CISO & President, Fox Corp. & Blockchain Creative Labs, shared two key areas in which she believes Web3’s potential could be unleashed that will benefit consumers.

“I really think about it as a technological innovation that will just enable entirely new models in two key areas for media, one is on the content side, how is content actually created and brought to market? The other side is distribution, and we believe there’s a way to bring content directly to fans in a much cleaner way,” Hildebrandt said about Web3’s potential impact on the industry.

Stagecraft could revolutionize the possibilities for future virtual productions

Lynwen Brennan, Lucasfilm’s general manager and EVP, and Janet Lewin, Lucasfilm’s SVP of VFX and ILM General Manager, explained how using Stagecraft as an “end to end virtual production tool” has transformed the landscape of productions at Lucasfilm. Having already practiced the tool on their widely popular projects like “The Mandalorian,” “Obi-Wan Kenobi,” “The Book of Boba Fett” and the upcoming series “Andor,” the executives shared positive predictions based on Stagecraft’s benefits.

“What Stagecraft allowed for was this amazing collaboration with all of the heads of department and filmmakers up front before we were shooting,” Brennan shared. “Then all of these in camera visual effects, which meant we could save money in our visual effects budgets, and we could save time in our post-production schedule and have this incredible quality result.”

In guessing what the future could look like, Brennan responded, “I think it’s really up to our filmmakers and that’s what makes it so exciting.”

“We have now a proven production methodology, but we love to be inspired by new ideas that are brought to the table. Also to leverage development in this space both off the shelf with real-time tools like Unreal, but also with future advancements in LED Technology,” she continued. “It’s hard to predict where the future will go. There’s a barrier to entry for some productions right now to use the toolset because it is expensive. But if you get a return on investment, it can be very efficient.”