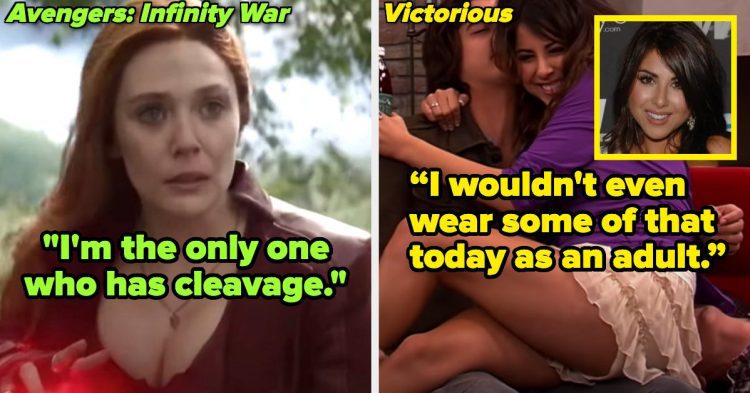 As Harley Quinn in Suicide Squad, Margot Robbie was famously sexualized and put in tiny sequin shorts (that were more like underwear) and a ripped white shirt (that later gets wet).

The outfit was a pretty large departure from the comics, which usually feature Harley in a bodysuit — an outfit she donned (though it later changed) in the HBO animated Harley Quinn series.

Robbie later spoke of the costume and the backlash surrounding it: “As Margot, no, I don’t like wearing that. I’m eating burgers at lunchtime, and then you go do a scene where you’re hosed down and soaking wet in a white T-shirt, it’s so clingy and you’re self-conscious about it.”

Robbie’s costumes in Birds of Prey were notably less sexualized (including, yes, overalls), and The Suicide Squad featured costumes and hair much closer to that of her comic counterpart.

One of the most famous sexualized movie costumes of all time was worn by Carrie Fisher in Star Wars Episode V: The Empire Strikes Back. In the scene, her character, Princess Leia, was enslaved by Jabba the Hutt and made to wear a metallic bikini and skirt.

Fisher said the costume “wasn’t [her] choice” and that when George Lucas showed it to her, she thought he was joking. “It made me very nervous. I had to sit very straight because I couldn’t have lines on my sides, like little creases. No creases were allowed, so I had to sit very, very rigid straight.” She was instructed to exercise in order to wear the costume, and later called it, “what supermodels will eventually wear in the seventh ring of hell.”

She also later gave advice to the newer trilogy’s star, Daisy Ridley, saying Ridley should not “settle for simply being a sex symbol. You should fight for your outfit. Don’t be a slave like I was.”

For Lara Croft: Tomb Raider, Angelina Jolie was reportedly unhappy with her character’s revealing and tight wardrobe, and thought it sent a bad message to young girls. She also had to pad her bra for the role.

When Scarlett Johansson first began playing Black Widow in Iron Man 2, her costume was much more revealing and sexualized than it would become in later films. Johansson herself called her character’s portrayal “hypersexualized,” saying, “You look at Iron Man 2 and while it was really fun and had a lot of great moments in it, the character is so sexualized, you know? Really talked about like she’s a piece of something, like a possession or a thing or whatever — like a piece of ass, really.

“And [Tony Stark] even refers to her as something like that at one point … ‘I want some’ [says Tony] … and at one point calls her a piece of meat and maybe at that time that actually felt like a compliment.”

Johansson said her character evolved over the years as she did, and that “Now people, young girls, are getting a much more positive message, but it’s been incredible to be a part of that shift and be able to come out the other side and be a part of that old story, but also progress.”

But while Johansson’s costume became less sexualized, Elizabeth Olsen was not as lucky with her character, Scarlet Witch. This was particularly evident in Avengers: Infinity War, when Olsen pointed out she was the only female Avenger to bare cleavage.

Olsen said she didn’t mind wearing a corset, but preferred that it hadn’t been so low-cut. “I’d like it to be higher. Everyone has these things that cover them—Tessa Thompson does, Scarlett does. I would like to cover up a bit. It’s funny because sometimes I look around and I’m just like—wow, I’m the only one who has cleavage, and that’s a constant joke because they haven’t really evolved my superhero costume that much.”

Notably, her costume was much more covered up in WandaVision and Dr. Strange in the Multiverse of Madness.

Another superhero who was not thrilled with her costume was Malin Åkerman in Watchmen. Comparing the tight latex suit to putting a condom over her whole body, she called the Silk Spectre costume “so uncomfortable.” She also revealed it was cinched in with a corset, and that “They wanted to cinch my waist in three inches smaller than what it actually is every day so that my shoulders looked broader.”

But it wasn’t just that the costume was physically uncomfortable. “It didn’t feel as powerful,” she said. “I think that the cool thing for me playing Silk Spectre was her being this powerful vigilante woman, aside from the costume. I actually think the costume kind of took away a little bit from it. I wanted to have combat boots and get rough and tumble.”

At age 12, Miley Cyrus was cast as Miley Stewart, a character who frequently took on her popstar persona of Hannah Montana. While Miley dressed much like a regular preteen, Hannah was outfitted with sequins and a long blonde wig.

Cyrus later spoke of the psychological effects of playing a character that was so made-up at a young age. “From the time I was 11, it was, ‘You’re a pop star! That means you have to be blonde, and you have to have long hair, and you have to put on some glittery tight thing.’ Meanwhile, I’m this fragile little girl playing a 16-year-old in a wig and a ton of makeup. It was like Toddlers & Tiaras. I had fucking flippers.”

“I was told for so long what a girl is supposed to be from being on that show,” Cyrus continued. “I was made to look like someone that I wasn’t, which probably caused some body dysmorphia because I had been made pretty every day for so long, and then when I wasn’t on that show, it was like, Who the fuck am I?”

In the wake of Jennette McCurdy’s bombshell memoir, I’m Glad My Mom Died, Victorious actor Daniella Monet said that she was forced to wear outfits she was uncomfortable with.

“I wouldn’t even wear some of that today as an adult,” Monet said, and a costumer on the show pointed out that teenage cast members often didn’t bring up their outfit concerns due to a fear of retaliation.

McCurdy herself was forced to put on a bikini and take photos in it for Nickelodeon despite begging to just wear a one-piece for an iCarly scene — she did end up in a one-piece in the episode, but photos were taken of her in a bikini to show an executive (likely Dan Schneider).

Jessica Alba hated wearing her famous blue bikini in Into the Blue. After she called it “not fun” in a People interview (which started with specifically praising Alba’s bikini-clad body, rather than speaking about the movie), the interviewer asked, “Was there one body part that you thought, “Please, can I not show it?”

“All of it,” Alba answered. “Every time the camera shut off, I was covering up in a towel and hating my life and calling my mom, and being like, ‘I can’t do this! I hate this movie!’”

In fact, Alba’s character was originally meant to be a marine-biology student who would wear a wetsuit. “But then the people in charge decided to dumb it down,” she said, and by the time Alba got on location to film, they had already filmed underwater scenes with her body double in a bikini. “I had to match what they’d already shot,“ she says. “If I’d bitched about the change, I would’ve been called a diva.”

Milla Jovovich called her “skimpy” costume at the start of The Fifth Element “a bit embarrassing.” While she had grown up as a model and was used to being dressed by others, she said that “In the fashion world, most of the guys are gay and they have the etiquette not to notice. But these English guys working on the set were whistling and stuff.”

However, she ultimately said, “My character’s all about what’s inside… It’s not really about her clothes.”

Charmed star, Alyssa Milano, didn’t name a particular outfit but said that she felt that her character’s costumes were overly revealing on the show.

In the ’90s, she said, it was like it was necessary to sexualize the characters in order to sell the show.

Kaley Cuoco disliked many of her Charmed costumes, including her wig and black vinyl outfit in early Season 8 and her superhero costume in the episode “Battle of the Hexes.”

Sophia Bush hated how often her character’s costume was simply her in underwear on One Tree Hill, and had to request that it happen less.

Her boss replied, “He literally said to me, he goes, ‘Well, you’re the one with the big f—king rack everybody wants to see. And I was like, [gasp], ‘What? Well, I’m not doing it!’” For the next episode, she showed up in a turtleneck “to be spiteful,” saying, “This is just how I’m gonna dress on the show from now on if you don’t stop writing these scenes.”

And finally, Marina Sirtis hated her cleavage-bearing Star Trek outfit, saying she had no say over it and was in fact told to lose weight to fit into it. “I was just the clothes horse, and they put stuff on me,” she said. She also suggested her character was just there “for the boys to look at.”

Sirtis was originally “supposed to be the brains of the Enterprise,” but when the decision was made to put her in a skimpy outfit, she said she “became decorative, like a potted palm on the bridge.” When her uniform changed and hid her cleavage, Sirtis said her character became more capable: “Consequently, I got all my brains back, because when you have a cleavage you can’t have brains in Hollywood.”

Here’s hoping that in the future, actors have a little more say in what they have to put on their bodies — especially when those things are inappropriate or revealing, and ESPECIALLY if they’re underage.