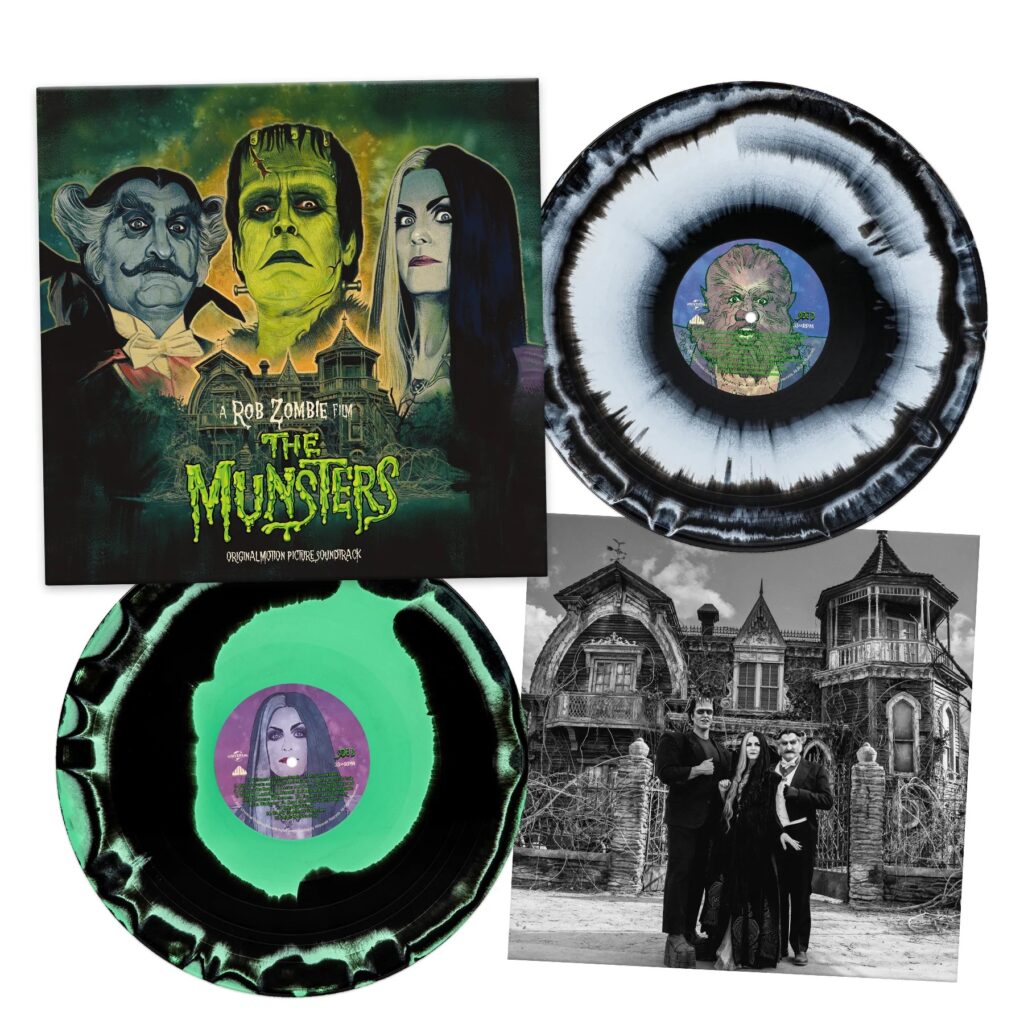 Waxwork Records is bringing the world multiple releases that are tied to writer/director Rob Zombie’s feature update of the classic sitcom The Munsters. They’re releasing a couple songs from the film – “It’s Zombo” and “The House of Zombo” – as a deluxe 12″ single pressed to 180 gram “Ghoul White” vinyl. The Sonny and Cher hit “I Got You Babe” is covered by Herman and Lily Munster (played by Jeff Daniel Phillips and Sheri Moon Zombie) in the movie, and their recording of the song is getting released as a single on vinyl. Now Waxwork Records is also accepting pre-orders for the Original Motion Picture Soundtrack, which has a release date of October 18th.

The movie is getting a Blu-ray, DVD, digital, and Netflix release on September 27th.

Here’s the info on The Munsters‘ soundtrack:

The Munsters features new songs by Rob Zombie and a score by Zeuss. Waxwork Records is proud to present The Munsters as a deluxe double LP featuring spooky synth-driven jams such as “Disco Vampire” and “Microbat / Megabat”, movie dialogue, and the singles “It’s Zombo” and “I Got You Babe” with performances by Sheri Moon Zombie and Jeff Daniel Philips. The chilling score album features a whimsically malevolent performance by Zeuss thats pays homage to the original 1960s The Munsters television series. Bells, xylophone, horns, claves, wood blocks, and wooden guiro, are paired with synthesizers and spine-chilling choir choruses to build an eerie and cooky good time!

This take on The Munsters has the following synopsis:

From writer/director Rob Zombie comes the strangest love story ever told. Lily is just your typical 150-year-old, lovelorn vampire looking for the man of her nightmares . . . that is until she lays eyes on Herman, a seven-foot-tall, green experiment with a heart of gold. It’s love at first shock as these two ghouls fall fangs over feet in this crazy Transylvanian romance. Unfortunately, it’s not all smooth sailing in the cemetery as Lily’s father The Count has other plans for his beloved daughter’s future, and they don’t involve her bumbling beau, Herman. You’ll laugh, you’ll cry, you’ll howl at the moon as The Munsters make their way to Mockingbird Lane!

Phillips and Moon Zombie are joined in the cast by Daniel Roebuck as The Count, Richard Brake as mad scientist Dr. Henry Augustus Wolfgang, Catherine Schell as a gypsy woman named Zoya Krupp, Jorge Garcia as Herman’s friend Floop, Tomas Boykin as Lily’s werewolf brother Lester, Cassandra “Elvira” Peterson as realtor Barbara Carr, Dee Wallace as the voice of Good Morning Transylvania, and Sylvester McCoy as Igor, the loyal servant to the Munsters. Jeremy Wheeling, Roderick Hill, and Mark Griffith are also in there are Mr. Gateman, Mr. Goodbury, and Mr. Graves, the owners of the Gateman, Goodbury, and Graves Funeral Home. Sitcom cast member Pat Priest is in there, and her sitcom co-star Butch Patrick is playing The Tin Can Man.

The Munsters ran for two seasons, from September 1964 to May 1966, and consisted of 70 episodes. (You can buy the complete series at THIS LINK.) Speaking with Entertainment Weekly, Zombie said his movie The Munsters is “100 percent in the spirit of the show. I didn’t want it to be different. I wanted to totally retain the vibe that it had in the ’60s.” His commitment to retaining the spirit of the show is evident in the film’s PG rating for “macabre and suggestive material, scary images and language”.

Will you be buying the soundtrack for The Munsters? Let us know by leaving a comment below.