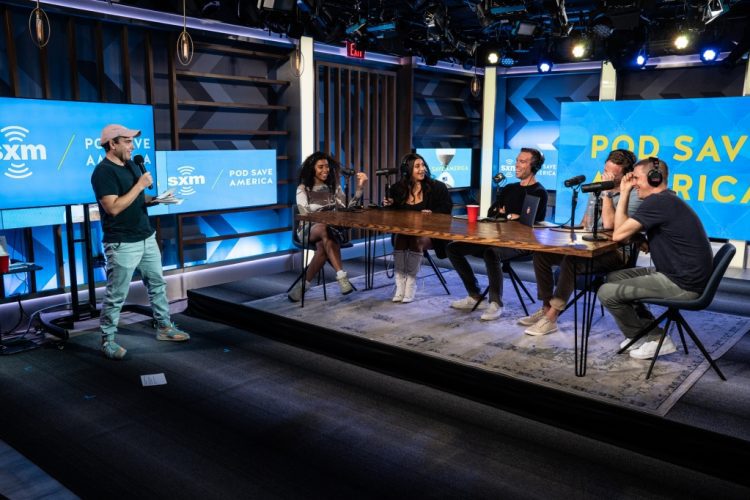 Crooked Media is looking to take its progressive-politics podcast empire to the next level.

The L.A.-based media company, which produces more than 30 podcasts including the flagship “Pod Save America,” has hired Lucinda Treat, chief legal officer at Vice Media Group for the last four years, as its first CEO. Crooked Media also announced an investment from Soros Fund Management, the investment firm founded by billionaire George Soros, which is taking a minority stake in Crooked.

Crooked Media didn’t disclose the amount of funding it received from Soros Fund Management, which represents its first outside financing. The company remains majority owned by founders and “Pod Save America” co-hosts Jon Lovett, Jon Favreau and Tommy Vietor.

With the funding, which closed Sept. 28, Soros Fund Management will have a seat on the board. According to the three Crooked Media founders, the Soros Fund backing will let them tap into the firm’s advice on investing in new projects internally or funding the company’s acquisition of complementary businesses.

Treat, who has spent more than two decades in media, entertainment and pro sports, starts Oct. 3 as Crooked Media’s first CEO. She’s relocating from the New York area to L.A. over this weekend.

“I really believe in doing things that are purpose-driven in my life, and this was an incredible match,” Treat said in an interview with Variety. About Crooked Media, she said, “They have growth ambitions that match what their audience wants. They have an incredible content slate they have built and expanded – there’s an opportunity to go into other formats and deepen their relationship with their audience.”

Before picking Treat, Crooked’s founders and COO Sarah Wick met with dozens of candidates as part of their CEO search, Vietor said. “We were excited about Lucinda from the moment we met her,” he said, citing her experience in helping to grow a media company and how her values aligned with those of Crooked Media.

Until now, Crooked Media has been led by the triumvirate of founders, who started the company in 2017 upon leaving the White House after they each served as aides to President Obama. Treat said that her appointment as CEO will free up Favreau, Lovett and Vietor to invest more time in creative projects instead of running the company day-to-day.

Crooked Media carries on its mission of producing “smart, funny, inspiring content that reflects people’s values and life experiences,” as well as striving to “combat the right-wing propaganda and extremism that’s threatening democracy here and around the world,” as the founders put it in a company-wide memo Thursday announcing Treat’s hire and the Soros funding.

Currently, Crooked Media has 88 full-time employees. The company expects to boost hiring but doesn’t have an explicit headcount target. “We’ll grow but do it in a way that is sustainable,” Treat said.

The company’s business has expanded from its roots in podcasting — with Crooked shows having been downloaded more than 1.3 billion times to date — to encompass live shows, newsletters, video, TV and film, books and satellite radio through its pact with SiriusXM.

Earlier this year, Crooked and SiriusXM announced a multiyear distribution and advertising agreement under which SXM Media has exclusive global ad sales rights to Crooked Media’s podcast lineup. Starting this weekend, Crooked Media podcasts will take over the SiriusXM Progress channel lineup every weekend until November’s midterm elections, featuring programming including “Pod Save America,” “Lovett or Leave It,” “Pod Save the World” and “Strict Scrutiny.”

On Sept. 28, SiriusXM’s L.A. Garage studios hosted a special recording of “Pod Save America” in front of a live audience, in which Favreau, Lovett, Vietor and fellow host Dan Pfeiffer were joined by guests including John Legend, Sen. Elizabeth Warren, Vibe Check co-host Sam Sanders, and Alycia Pascual-Peña and Yasmine Hamady, hosts of Crooked Media’s “Dare We Say” podcast. The episode is slated to air on SiriusXM Progress (channel 127) Friday at 7 p.m. ET.

With Treat coming on board as CEO and the new funding, Crooked Media is hoping to expand its TV and film biz. Among projects on this front, Crooked Media has inked a deal with Hulu to adapt 2020 limited-series podcast “Wind of Change” for television. Hosted by journalist Patrick Radden Keefe, the podcast explores the weird history behind the Scorpion’s 1990 metal ballad “Wind of Change” — which was actually written by the CIA.

Treat joined Vice Media in October 2018. She will continue to work with Vice in an “advisory capacity” during a transition period after her replacement is named, a Vice Media rep said. Regarding her exit from Vice, Treat said, “It’s been an emotional departure… It’s a very close family.”

Prior to Vice, Treat was EVP and general counsel at Independent Sports & Entertainment (ISE), a management, representation, consulting and marketing agency for talent, properties and brands. Her experience in the sports sector also includes serving as general counsel for the Madison Square Garden Co., responsible for overseeing all aspects of legal and business affairs for MSG, including the New York Knicks, Rangers and Liberty teams, MSG Networks and Entertainment and Radio City Music Hall.

Treat also was EVP and chief legal and administration officer at cosmetics giant Revlon and has held executive positions at Palace Sports & Entertainment and at New England Sports Ventures, the holding company for the Boston Red Sox and other businesses. Her legal career began as an associate at the New York law firm of Shearman & Sterling in mergers and acquisitions where, among numerous transactions, she also represented John W. Henry in the purchase of Major League Baseball’s Miami Marlins. Treat graduated magna cum laude from the Georgetown University Law Center and received an undergraduate degree from the University of Wisconsin at Madison.