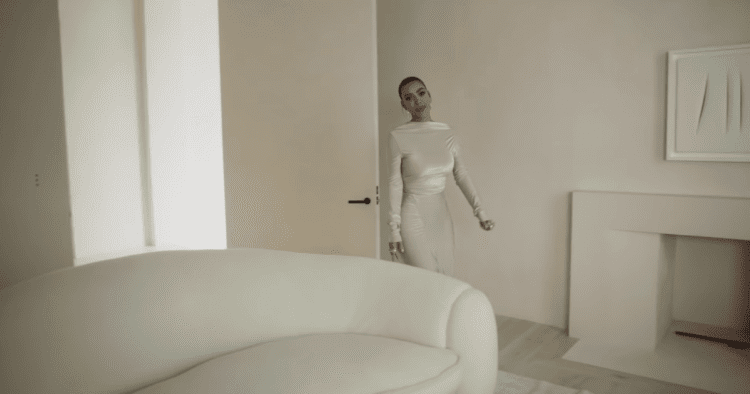 Welcome to the good life! Kim Kardashian‘s California mansion she once shared with ex-husband Kanye West is beyond amazing. Not only is the house massive, but it also has an incredibly unique aesthetic. Thankfully, Kim has been kind enough to give fans a peek inside on numerous occasions.

In April 2019, the Keeping Up With the Kardashians fan-favorite participated in Vogue‘s “73 Questions” segment where she walked longtime interviewer Joe Sabia throughout her home prior to filing for divorce from Kanye in February 2021. Right off the bat, you could tell the family’s place is spacious and follows a strict neutral-toned color scheme, which comes as no surprise considering the former couple are very particular.

When asked how she would describe her house, Kim said it’s like a “minimal monastery.” For those who don’t know, a monastery is a building or buildings where monks or nuns live. The inspiration behind the decor and architecture came from Kanye, of course, as well as Belgian designer and antiquarian Axel Vervoordt, who helped design the place.

According to People, the couple reportedly purchased the house in December 2014 for $20 million, just months after they tied the knot. Three years later, they decided to get it renovated, and in April 2018, Kris Jenner revealed the property is now worth $60 million. Must be nice, huh?

Despite having four young kids — North, Saint, Chicago and Psalm West — Kim opted for a very lightly colored house. However, she always makes sure to keep it looking tidy and clean. “Oh, my God. I run around the house with towels,” the Skims founder told Architectural Digest in January 2018.

“You do have to just take a deep breath and say, ‘OK, it’s going to happen. We decided to have lighter colors,’” Kim continued. “Our last house that we just moved out of was all grays, which was a good test because we knew we were going to move into a lighter house.”

No worries, though! The mansion includes a playroom with every comfort a child could possibly need to keep them entertained.

Kim got to keep her beloved mansion as part of her divorce settlement with Kanye. She was granted legally single status in a “bifurcated divorce” by a judge in March 2022, as the former couple continues to resolve issues involving custody and financial assets. Kim has since given additional video tours of the home that have included her spacious backyard, workout room and her massive luxury car collection,