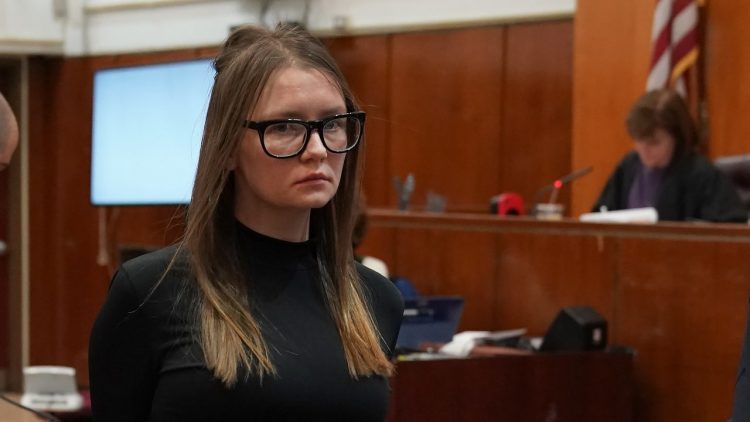 Anna Sorokin was released on bail this week using money from the sales of her own artwork.

On Friday, the scammer who swindled New York socialites into believing she was a German heiress named Anna Delvey was released from an ICE detention facility in Goshen, New York, and sent back to Manhattan. U.S. immigration Judge Charles Conroy granted Sorokin’s $10,000 bond on Wednesday after she met all the conditions for her release. Sorokin’s lawyer Duncan Levin said in a statement, “We are extremely gratified by the court’s decision today to release Anna Sorokin. The judge rightfully recognized that Anna is not a danger to the community.” Her representative Juda Engelmayer also told Page Six that she was able to raise the money necessary for bail by selling her artwork online. Sorokin held a solo art show in NYC in May titled “Allegedly” and has been selling off the pieces from that exhibit over the past few months by posting them to her Instagram account.

In May 2019, Sorokin was sentenced to four to twelve years in prison for her involvement in financial crimes, including grand larceny and stealing a private jet. After serving four years, she was then sent to immigration detention for overstaying her visa. She spent the next 18 months behind bars after a judge determined that she was unrepentant. In a statement to the New York Times, the convicted fraudster said, “The thing is, I’m not sorry. I’d be lying to you and to everyone else and to myself if I said I was sorry for anything. I regret the way I went about certain things.” Sorokin was born in what was then the Soviet Union and also has German citizenship.

This week, however, Judge Conroy concluded that the fake heiress is no longer a threat, as long as she wears an ankle bracelet. She will also have to find a new way to sell her artwork as he ruled that she will be barred from using social media “either directly or by a third party.” Thanks to the viral New York magazine story about her exploits and Inventing Anna, the dramatized Netflix series about her life that premiered earlier this year, Sorokin has amassed one million followers on Instagram. Subsequently, she used the social media platform to communicate directly with fans and supporters and sell her art.

According to Page Six, prior to her release, Sorokin was struggling to find a place to stay on short notice as she needed to provide the court with a residential address where she would be under “24-hour confinement” for “the duration of her immigration proceedings.” But a source told the outlet that she was ultimately able to find a spot downtown for almost $5,000 a month where she will wait out her house arrest. She has also already paid the first three months of the six-month lease upfront and was able to find a guarantor. While Sorokin will not be allowed to leave the property, she will be able to receive visitors, although they will have to be approved and scheduled first.