Why We’re Drawn to Colleen Hoover and Reading About Trauma 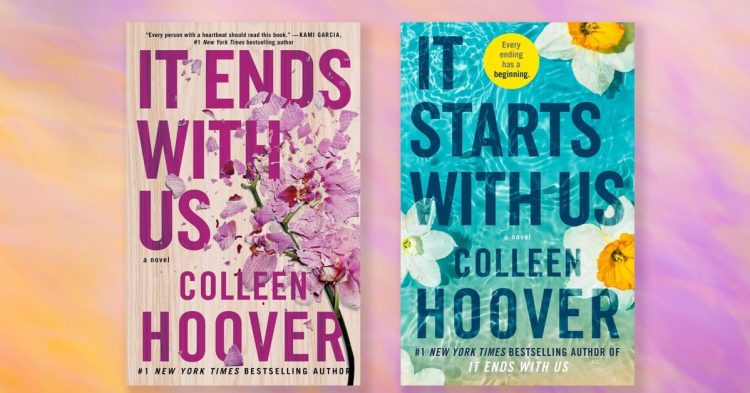 Colleen Hoover fans—a passionate group of readers who call themselves the CoHort—are preparing to be emotionally walloped.

On Oct. 18, Hoover will publish It Starts With Us, the long-awaited sequel to 2016’s It Ends With Us. While her two dozen novels are mostly romances, Hoover specializes in the type of book that practically demands a reader have their therapist on standby. Consider recent reactions on TikTok, where the #ColleenHoover hashtag has been viewed more than 2.4 billion times: “I never cry while reading books but this ending just made me burst out in tears,” one person wrote. “I’m just about to go hit rock bottom, so I was wondering if anyone needs anything while I’m there,” another chimed in, clutching a copy of It Ends With Us.

Hoover’s novels probe dark themes: abusive relationships, toxic masculinity, sexual assault, miscarriage, infidelity. She’s been open about her personal connection to some of the things she writes about: Hoover has said that her father physically abused her mother, and that It Ends With Us was inspired by her mother. The novel introduces readers to Lily—a florist who grew up with an abusive father—and her neurosurgeon husband, Ryle, who turns a childhood incident into an excuse for assaulting her. He grows especially jealous and vengeful after Lily reconnects with her first love, Atlas. When Lily learns she’s expecting Ryle’s baby, she has to decide whether she’ll continue to tolerate the cycle of abuse she’s been trapped in her entire life. It Starts With Us picks up where the novel’s epilogue ends and centers on the relationship between Lily and Atlas. It promises to deliver more of Hoover’s signature heartache and ugly tears.

Some readers have noted online that books like It Ends With Us have shifted their perspective on domestic violence, helping them understand why a battered partner might struggle to leave an abuser they still love. Hoover recalls even more personal stories from fans. “I’ve heard from readers who left terrible situations that my books inspired them to do so—that’s the most amazing thing I could ever hope to happen,” she told TIME via email. “That just sharing stories could really help change another person’s life—the weight of that is immense, but if I’ve helped one person in any way, that’s something really special.”

Hoover isn’t the only creator to be inspired by the so-called trauma plot: other examples include Hanya Yanagihara’s A Little Life, the new Netflix movie Luckiest Girl Alive, and the HBO drama Barry. Some critics pan the approach, arguing that characters are flattened when defined only by their trauma, and that it could be exploitative.

That criticism is valid, says Naomi Torres-Mackie, a psychologist at Lenox Hill Hospital in New York City and head of research at the Mental Health Coalition. “When trauma is absolutely central to a character’s existence, it can be dehumanizing and parallel what happens in real life—when we learn about somebody’s traumatic past, and they have to fear that that’s all we’ll see now,” she says. “That’s very unfortunate because, of course, trauma survivors are full, multifaceted humans.”

However, Torres-Mackie adds, when executed well, trauma has an important place in literature and media. It’s key that such depictions exist “in a way that’s holistic and humanizing and balanced.” Darkness is an inevitable part of life, she stresses: “Reading content like this can feel like a relief within a culture where we’re all supposed to be happy-go-lucky.”

Hoover self-published her first novel, Slammed, in 2012, and has since reliably churned out a couple new books a year. Much of her work has experienced a boom in popularity thanks to BookTok, the corner of the video-sharing platform TikTok dedicated to book recommendations. She authored the No. 1 and No. 2 books on the Oct. 9 New York Times best sellers list: Verity (43 weeks on the list) and It Ends With Us (68 weeks), both of which were published more than three years ago. In the past year alone, copies of her books have outsold the Bible.

It might seem counterintuitive that readers would be so eager to inhale uncomfortable books that leave them sobbing and heartbroken. But reading about trauma is appealing for a variety of reasons, one of which is that it helps us learn about the full spectrum of events that make up a life. “It gives you a lens into different experiences,” Torres-Mackie says. “As human beings, we’re inherently fascinated with each other.” In this case, that eagerness could stem from a desire to relate to people we know who have experienced trauma, or from good old-fashioned voyeurism.

There’s so much violence against women in the U.S. that it’s natural for readers to seek it out in fiction, some experts say. Forty-one percent of women have experienced sexual violence, physical violence, and/or stalking by a partner, according to the U.S. Centers for Disease Control and Prevention. “The themes in her books, while obviously dramatized and created for our entertainment, draw on a lot of what’s actually happening in this world,” says Willow Goldfarb, a Fort Lauderdale, Fla.,-based licensed mental health counselor with Thriveworks, a counseling practice with locations across the U.S. In It Ends With Us, she points out, there’s intense drama and jealousy between Lily and Ryle. Their relationship is also complex: even though Ryle’s violence is objectively unacceptable, he has a tormented but loving side that makes Lily, and some readers, wish they could rehabilitate him. “I think a lot of women can connect to that—of trying to save these men who we believe can be brought back from this brink of their own abuse and torture,” she says. Goldfarb has a point: in one TikTok video, a reader commented, “Am I the only one that wants to fix Ryle so bad?”

Readers who have experienced domestic abuse or other trauma often appreciate seeing themselves reflected back in a storyline, says Juli Fraga, a psychologist with a private practice in San Francisco. Such representation can help them feel less isolated and temper the feeling of being “other.” “They’re looking for themselves in the story,” Fraga says. “Hearing that somebody’s experiences were similar to yours, or even worse than yours, can help you feel less alone—even if it’s merely in a book of fiction.”

Others might consider the books a way to buffer their own safety and prevention strategies. A reader might watch for warning signs before Ryle shoves Lily down the stairs, cataloging his behavior before and after. Torres-Mackie explains the thought process: “If by reading these kinds of narratives I can understand this traumatic experience, even though it’s fiction, maybe I’ll be able to prevent my own pain,” she says. “There can be a sense of self-protection and learning from other peoples’ traumatic experiences.”

Hoover’s popularity speaks to a cultural shift that’s transpired over the past couple decades, says Alexandra Cromer, a Virginia-based licensed professional counselor with Thriveworks. “You didn’t talk about trauma 50 years ago,” she says. “You sucked it up and moved on.” Now, with each new generation, that’s changing. “There’s been a lot more awareness and compassion toward trauma stories—so there’s more space for people to learn about this stuff.”

Reading about trauma could certainly lead to mental-health effects, experts agree. But—and here come a therapist’s two favorite words—it depends. An individual reader’s past experiences, emotional wellbeing, and other personal factors will determine the impact a book has on them.

It’s important to consider the reason why someone is consuming this content, Torres-Mackie says. It could be the pursuit of catharsis—the healthy release of previously repressed emotions associated with traumatic events. “It can be really hard to feel difficult emotions,” she says. “But if you can experience them through somebody else, like a character in one of these books, it allows you to feel your own dark feelings.”

Especially for trauma survivors who still have a lot of healing to do, however, the material could trigger flashbacks, unpredictable emotions, physical symptoms like headaches, or even post-traumatic stress disorder. Reading about difficult subject matter, such as physical abuse, activates our mirror neurons—brain cells that are likely the neurological basis of empathy and that influence the way we experience another person’s emotions or actions. “These neurons can get fired up, and that’s why these things give you that jolt of adrenaline or excitement,” Torres-Mackie says. “You feel as if you’re in the narrative yourself.”

Torres-Mackie advises closely monitoring your reaction to the reading material: you should be consuming it, rather than having it consume you. If you start feeling hyper-vigilant and unsafe in the world, or if you’re having nightmares about the book, it’s probably smart to stop reading. Torres-Mackie offers a guiding question: “Does it fill you up, or does it deplete you?”

Ideally, readers will experience novels like It Ends With Us and It Starts With Us as what they are: entertainment, Goldfarb says. She considers herself a Hoover fan and doesn’t feel like she’s been harmed by the material. “But I’m also a person who has worked through my own trauma, and done my own therapy,” she says.

The publishing industry could do a better job of sharing resources for readers who might be adversely affected by sensitive content, she adds. “In every book, there could be a little leaflet or disclaimer, like, ‘This isn’t healthy or normal. This is for entertainment purposes,’” she suggests—plus contact information for a mental-health organization like the Substance Abuse and Mental Health Services Administration or National Alliance on Mental Illness.

Readers can also look up trigger warnings for books, including on websites like doesthedogdie.com—and these ought to be included on the cover or in some other prominent place, Goldfarb says. That would provide readers with a clear sense of whether they would encounter themes it would be healthiest for them to avoid. “Take care of yourself and tune into your body when you’re reading these things,” she says. “If you’re upset by it in a way that doesn’t go away with a cup of tea and a hug, talk to somebody about it. And let’s push for more trigger warnings about these major themes in books, so we can protect each other and still have a great time reading.”