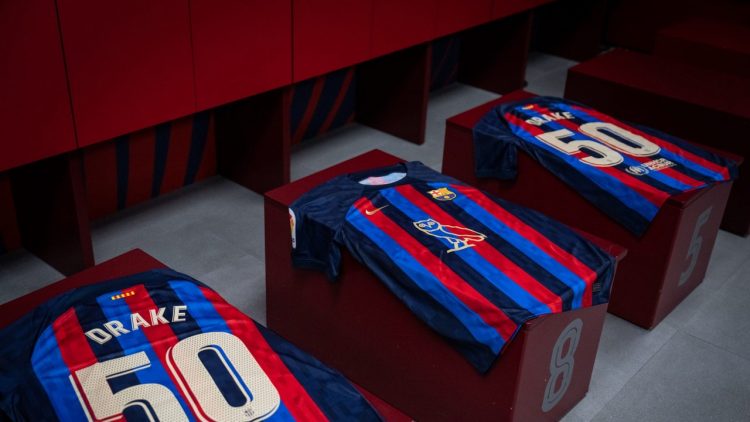 The next El Clásico match between rival Spanish football clubs Barcelona and Real Madrid is set to take place this coming Saturday, during Drake’s very own month of October. For the occasion, main Barça sponsor Spotify is taking the opportunity to celebrate two of its most successful assets: Champagne Papi, already the most streamed artist of all time, just became the first artist to surpass 50 billion streams on the platform, and so Barcelona will wear a limited-edition OVO kit during the game.

Players will sport the special October’s Very Own jerseys on the pitch Sunday, with Drake’s signature owl logo replacing the streaming giant’s for this clásico only. (Spotify became FCB’s front-of-the-jersey sponsor back in March, which also led to a name change for the club’s iconic Camp Nou stadium, which is now called Spotify Camp Nou. This Sunday’s match, however, will go down at Santiago Bernabéu in Madrid.) Before the match, the team is set to warm up in training jerseys with the number “50” on the back, to celebrate the 50 billion streams.

“For the first time in our history, we are replacing the name of our main sponsor on the front of the jersey with an internationally acclaimed artist, Drake,” Juli Guiu, vice president of marketing for FC Barcelona, said in a press release. “This initiative shows our potential to become a unique platform to offer experiences that help bring us closer to our fans while reaching out to new audiences around the world.”

“This doesn’t feel real but it is,” Drake, a nondenominational lover of professional sports, wrote about the jersey (and/or the 50 billion streams) on Instagram. And as far as Drizzy’s allegiances to various streaming platforms goes, while he’s always been a numbers juggernaut for Spotify, he famously signed a pioneering blockbuster contract with Apple Music when the service first launched in 2015. More recently, SiriusXM (which is the parent company of Pandora) gave him his own radio channel—Sound 42—to call his own. All of which makes it clear that Drake’s very own OVO Barça jersey has earned a place on the wall next to Drake’s very own OVO Toronto Raptors jersey.