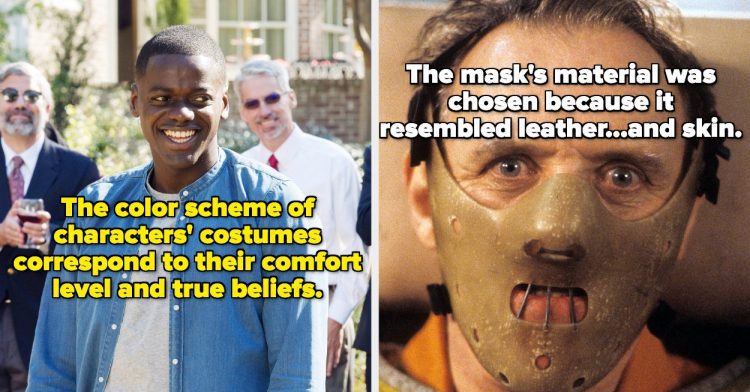 Nadine Haders, the costume designer for Get Out, described to Vogue how the color palettes she used for different characters indicated their inner lives and comfort levels. For instance, the main character, Chris, wears blue when he’s away from his home in Brooklyn since blue is the “color of his urban life, his true self.” And while he stays at his girlfriend’s parent’s house, his pajamas, or what Haders refers to as “cozy clothes,” are gray, since that color “exists in a world between black and white.”

Meanwhile, the unsettling party guests Chris encounters are largely dressed in black and white, which Haders said was “an obvious nod to the racial tensions in the film.” She also incorporated a small amount of red into their outfits, since it’s “symbolic of secret societies.” For instance, Rose’s father is wearing a red pocket square.

Jordan Peele, director of Get Out, Us, and Nope, said in an interview with Fox 5 Washington D.C. that when he decided he wanted Jason, the young son of the Wilson family in Us, to wear a Jaws T-shirt, he personally asked the film’s director Steven Spielberg for permission.

Spielberg agreed, and was subsequently thanked in the film’s credits. Peele said that Spielberg’s work “influenced me a great deal,” and noted that reaching out to him about Jason’s shirt was one of the first things on his to-do list after completing the script.

According to The Hollywood Reporter, the creative team behind The Silence of the Lambs cycled through a few different design options for Hannibal Lecter’s muzzle, including some that resembled the protective masks used by fencers.

The final fiberglass design was supposed to be painted, but in a behind-the-scenes interview, costume designer Colleen Atwood said that they ultimately decided against it, since the unpainted mask had the appearance of leather or skin, which worked perfectly for Lecter.

In a 2017 GQ interview, Bill Skarsgård recalled that he was at one point instructed to show up to his callback audition for the role of Pennywise in It wearing his very own clown makeup. He got the makeup from a Halloween store, appropriately enough.

Skarsgård said about the experience, “Either you cower in the awkwardness and humiliation of it all, or you really commit to staying in whatever the character is and using this absurdum in your favor. It’s such an almost metaphorical thing for what it is to be an actor in LA, forcing you to drive in clown face down Hollywood Boulevard for an audition you might not get.” And for the record, the actual Pennywise makeup he wore when he got the gig took two-and-a-half hours to apply.

Suspiria (2018) costume designer Giulia Piersanti told Elle that to create the knotted rope outfits worn by the cast, she referred to “bondage techniques” and purchased “meters and meters of [red rope] from sex shops,” after researching different types she could use in the design.

According to an interview costume designer, Laura Montgomery, did with The Credits, Chris Rock, the star of Spiral: From the Book of Saw, wanted his suit to look realistically cheap and worn. Montgomery says Rock told her, “‘I don’t want to look good. I’ve hosted the Oscars twice, everybody knows what Chris Rock looks like in a nice suit. This can’t be a nice suit.”

Additionally, Rock pointed out that police officers like his character generally make lower salaries, so Montgomery chose an off-the-rack suit that they didn’t tailor.

To costume the climatic prom scene in Carrie (1976), costume designer Rosanna Norton told Birth. Movies. Death. that she pulled the ensemble’s outfits from a “bride store that was going out of business.”

Norton explained, “You used to be able to rent prom dresses and bridesmaid dresses and bride gowns, even, and we found this store in the Valley that was going out of business. They had tuxedos and dresses and we were able to get the doubles we needed.” Carrie’s dress was personally designed by Norton, who said she wanted it to be appealing but simple, to give the impression that Carrie could’ve sewed it.

To create the colonial costumes for The Witch, costume designer Linda Muir told Bright Lights Film Journal that she used resources such as 35 reference books shared with her by director Robert Eggers, photographs of historical fashion exhibits in museums such as the Victoria and Albert Museum, and conversations with experts like Denise Lebica, a historical clothing expert at Plimoth Plantation, whom Muir said was “extremely generous with her time and knowledge of the period.”

Scream costume designer Cynthia Bergstrom told Nylon that the colors featured in the cast’s fashion were drawn from none other than Edward Munch’s The Scream, explaining that the famous painting is where she “got a lot of the bright chartreuses, oranges, yellows, and reds.”

Flesch explained that due to the reclusive and traditional nature of the community, “It should look like they do their costumes themselves, and everybody has his own costume. That’s why it was also very important that all the costumes looked different — some of them are better made, some of them less — to see the difference.”

Yeah, if I were designing costumes for horror movies, I’d probably start here, too.

According to Entertainment Weekly, the cast of The Blair Witch Project just wore their own clothes during filming, appropriately enough for a film with an extremely tight budget of $60,000.

Actor Michael Williams told EW that his costar, Heather Donahue, used to help him sew up his jeans, which repeatedly ripped during the shoot.

Spoiler alert for Paranormal Activity: Next of Kin here, but…the family who everyone thinks is Amish? They’re not really Amish. And costume designer Whitney Anne Adams told The Art of Costume that she incorporated some hints into their costumes that that was the cast.

Adams explained, “They’re striving for as much authenticity as possible, but when they’re at their farm, they can let their guard down a little. So, they can do things that are not necessarily Amish. … For example, vests are usually not worn except for church or ceremonial purposes. So we added those into the film because that is not how the Amish wear vests.” Additionally, the men’s costumes were made out of cotton, which according to Adams is unusual in real Amish communities, since it’s harder to wash and maintain.

Alex Bovaird, who designed the costumes for Nope, told SyFy that they tried “crazier versions” of the garish costume worn by the “failed actor” Jupe, played by Steven Yeun. One (tragically rejected) option was a “pink suit with leather fringe.”

Bovaird said, “We were playing with the idea that Jupe is still obsessed with artifice. … Steven Yuen and I talked about just slightly leaning into this Willy Wonka thing.”

And finally: According to Variety, The Invisible Man production designer Alex Holmes and director Leigh Whannell worked with academics at New South Wales University in Australia, where the movie was shot, to lend a degree of realism to the otherwise fantastic invisibility suit invented and worn by the antagonist, Adrian.