‘Ambulance’ is Michael Bay’s Most Entertaining Movie Since ‘The Rock’ 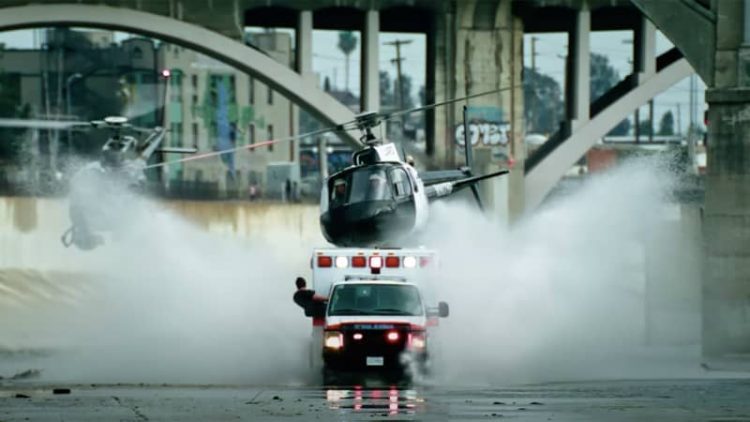 Michael Bay makes two kinds of movies — hugely nonsensical action blockbusters (the Transformers franchise, 2007-2017; Armageddon, 1998) and smaller, more grounded action movies (Pain & Gain, 2013; 13 Hours, 2016) — and he seems equally at home with both. All of the films have their fans (yes, including 2005’s The Island), but it’s arguably clear that Bay’s at his best with the latter films that are more focused on practical action than CG shenanigans. Happily, Bay’s latest sits comfortably in this smaller group as Ambulance delivers a steady stream of explosive stunts, thrilling action, and charismatic characters. It’s easily his most purely enjoyable film since 1996’s The Rock.

Will Sharp (Yahya Abdul-Mateen II) has seen better days. Today, though, is as far removed from the positive as his home in Los Angeles is from the Afghanistan desert where he served as a Marine. He’s buried in overdue bills, unable to afford necessary surgery for his wife, and father to an infant son, but “luckily” for him, he’s also brother to a man with a plan. Danny Sharp (Jake Gyllenhaal) runs a successful business doing… something? It’s unclear, but he also robs banks, and today a desperate and begrudging Will is joining Danny’s crew for a multi-million dollar score. What could possibly go wrong?

Everything, it turns out, and soon Will and Danny are forced to hijack an ambulance containing a wounded cop (Jackson White) and a determined EMT named Cam Thompson (Eisa González). With LA police and the FBI in pursuit, the brothers are chased through the city hoping both escape and a healthy payday awaits them.

Ambulance runs a bit over two hours, but while too many of Bay’s films feel the weight of their bloat, his latest speeds along with both focus and fun. The chase accounts for half the film, and Bay’s kinetic approach to action beats rarely lets it feel repetitive no matter how many cars he encourages to crash, explode, and burn. The cast is fully committed with performances that understand the balance between the nonsense of it all and the seriousness of the situations, and Bay’s technical crew is equally on point.

Chris Fedak‘s script, based on a Danish action/thriller from 2005, isn’t all that concerned with nailing realistic details or creating smart characters, but neither should be expected from a Bay film. That’s not a knock as filmmakers like Bay serve a valuable purpose in creating entertaining action movies that refuse to be bogged down in plot details or anything beyond superficial characterizations. This is a film where the bank robbers commit the heist saying their real names and without masks — although some of them don masks when they leave the bank? It’s dumb, but you won’t care. Add in references to Bay films like The Rock and Bad Boys (1995), and a delightful sequence set to Christopher Cross’ “Sailing,” and it’s clear that this is a movie that wants only to entertain and thrill.

What matters here is the action, and on that count, Ambulance is an absolute blast that throttles its thrills nearly non-stop with big stunts, ramped up suspense scenes, and more. Filmed during the pandemic while much of LA was still closed, something evident in some Dr. Fauci graffitti and a couple overhead shots revealing some mostly highways, the film sees cars smashing, crashing, and flipping over with abandon. Bay’s destroyed cars in many (most?) of his films, and his enthusiasm for the carnage (not sorry) never seems to wane. Fans of practical stunts are well-served here, and while a couple moments of “shit” CG — Bay’s words, not mine, but he ain’t wrong — pop up, they’re quickly replaced by a return to more impressively physical action beats.

He and cinematographer Roberto De Angelis somehow up the ante here at times, though, by capturing the destruction and stunts with some souped up drones. Shots rise up only to spin and speed towards the pavement while others fly beneath cars mid-jump — they’re dizzying and mesmerizing in equal measure and captured by some mad combination of skill, irresponsibility, and luck. Much of the action is captured with an electric clarity and accompanied by booming sound and seat-rattling bass meaning you feel it in your bones… and love it. Bay’s penchant for fast cuts and tightly cropped action still rears its head throughout, though, but consider it a break from the good stuff and a chance to relax. One character even comments that this is becoming “a very expensive car chase,” and you just know it’s a complaint that Bay’s heard from producers and studio executives before.

It’s all winners on the human front despite Ambulance being a film that isn’t nearly as concerned with them as it is with the action set-pieces. Audience loyalties are tossed around — we care about Will, but he’s still a bad guy! it’s blatantly pro-cop, but then they do something accurate and evil! Danny is clearly the villain, but he’s so much goddamned fun! — but the inconsistencies are at home in a Bay film. Gyllenhaal is firing on all cylinders here shifting easily between intense acts/threats of violence and goofy playfulness, while Abdul-Mateen II and Gonzalez do good work with less range to cover. On the supporting front, look out for fun turns from Garret Dillahunt, Keir O’Donnell, and A Martinez.

At a reported cost of $40 million, Ambulance is Bay’s third-least expensive films (after Bad Boys and Pain & Gain), and there’s joy in seeing him deliver as much if not more excitement and entertainment than his far costlier movies typically manage. It’s also removed from the desire or responsibility of furthering a franchise, a rarity out of Hollywood these days, and that alone makes it a winner delivering a highly satisfying, one-off ride through the streets of LA. Could it have been smarter or more sensitive to certain characters? Sure, but Bayhem answers to no one.