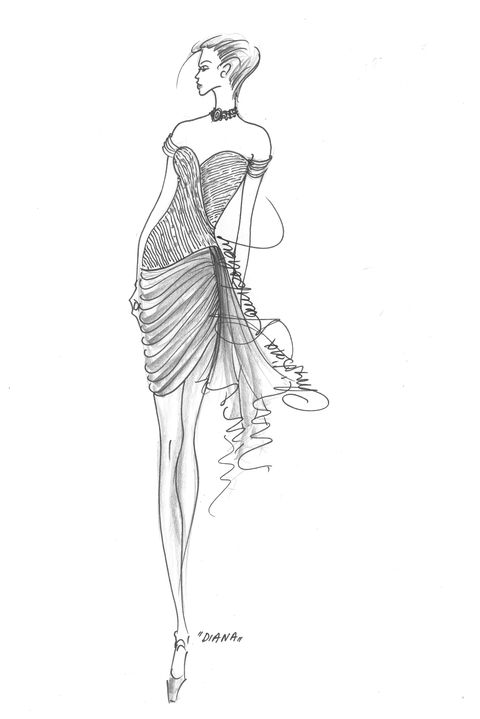 Princess Diana’s legacy reaches far beyond fashion, but she is still the 20th century’s greatest style icon. In Diana: A Life in Dresses, a new book out from ACC ART BOOKS, fashion journalist Claudia Joseph opens the door to the world’s most coveted closet. From the “Travolta gown” to the “revenge dress,” Diana: A Life in Dresses chronicles Princess Diana’s sartorial evolution from her early shopping days at Harrods to working with world renowned designers like Catherine Walker. Below, ELLE got a first look at new interviews with the designers behind Diana’s most memorable gowns—and an exclusive glimpse of never-before-seen sketches of those looks.

Designer Christina Stambolian remembers Princess Diana coming into her shop in 1991 and asking for a “special dress for a special occasion,” according to Diana: A Life in Dresses. After sketching out a few ideas, Stambolian landed on a short number that took two dressmakers more than 60 hours to make. Princess Diana wore the dress a few years later to a dinner at the Serpentine Gallery in Hyde Park, and it was immediately dubbed the “Revenge Dress” after Prince Charles admitted to having an affair with Camilla Parker Bowles that very same night. In reference to the ballet Swan Lake (one of Diana’s favorites), Stambolian says in Diana: A Life in Dresses that she was “thrilled to see Diana wear it on that night of all nights. She chose not to play the scene like Odette, innocent in white. She was clearly angry. She played it like Odile in black. She wore bright red nail enamel, which we had never seen her do before. She was saying: ‘Let’s be wicked tonight.’” According to Diana: A Life in Dresses, the dress remains in a bank vault and has not been seen for many years.

Princess Diana chose this green gown designed by Victor Edelstein to sit for an official portrait by the esteemed photographer Sir Terence Donovan in 1986. According to Diana: A Life in Dresses, the dress was bought at auction in 1997 and is put on display on the first day of college and on ten-year anniversaries at the Mejiro Fashion & Art College in Tokyo, Japan.

Princess Diana wore this silk lace gown from Victor Edelstein on two separate occasions. The first was in 1987 at London’s Royal Festival Hall. Later that year, she wore it again during a state visit to Germany. In 1997, designer Pat Kerr bought the gown, according to Diana: A Life in Dresses. It now resides in the Pat Kerr Private Royal Collection.

On Nov. 9, 1985, at a White House dinner hosted by President Ronald Reagan and First Lady Nancy Reagan, Princess Diana wore a blue velvet Victor Edelstein gown that would go down in history as one of her most iconic looks. She paired the dress with a sapphire and pearl choker necklace gifted from Queen Elizabeth II. At the event, Diana was photographed dancing with John Travolta. “It was a model in my collection which she chose,” Edelstein says of the gown in Diana: A Life in Dresses. “The model was burgundy and she thought she would like to have it in navy. I had no idea where she was going to wear it, because every season she would order various dresses because she needed long dresses. I’m sure that when she went to Washington, she probably took two or three evening dresses with her and decided at the last moment which one she was going to wear. That’s the usual royal thing.”

On March 8, 1982, Princess Diana was photographed toting baby Prince William at the Aberdeen Airport in a dark red Caroline Charles wool coat dress. The dress is now on display at the Princess Diana Museum, which boasts over 1,800 pieces of Diana’s personal and historical artifacts.

Diana: A Life in Dresses 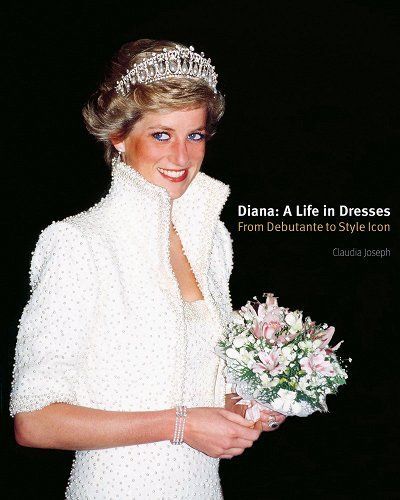 Rose is a Senior Editor at ELLE overseeing features and projects about women’s issues. She is an accomplished and compassionate storyteller and editor who excels in obtaining exclusive interviews and unearthing compelling features.