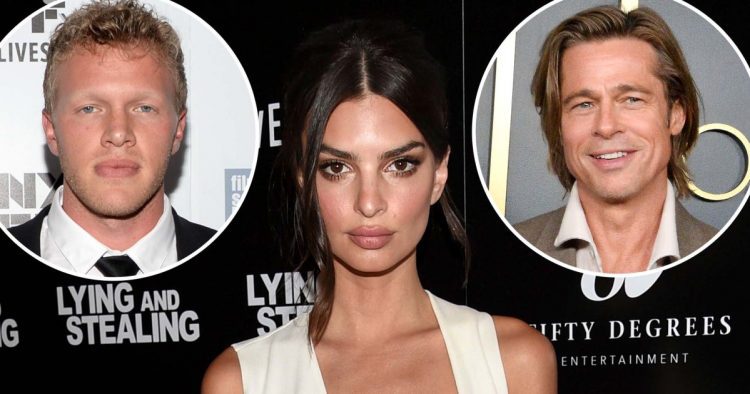 Relationship gal! Emily Ratajkowski’s dating history is actually quite short, as the model has only been in a few long-term romantic relationships ever since she skyrocketed to A-list fame after appearing in the music video for Robin Thicke’s “Blurred Lines” in 2013.

Though the My Body author dated creative director Andrew Dryden and musician Jeff Magid in the past, her most famous relationship is with estranged husband Sebastian Bear-McClard, whom she wed in 2018 after just weeks of dating.

The iCarly alum revealed the news in a series of Instagram Stories on Valentine’s Day that year, captioning a selfie of the couple, “Sooo I have a surprise. I got married today.”

“[Sebastian] proposed to me at Minetta Tavern [in New York City], and he didn’t have a ring so I was like, ‘Mmm, nah,’” Emily recalled during an appearance on The Tonight Show Starring Jimmy Fallon in April 2018. “And then he took the paper clip that the bill was paid with and made me a ring, which I actually thought was really romantic.”

While it appeared that Emily and Sebastian got married after knowing each other for a short period of time, the Gone Girl actress later revealed that the pair had known each other for a few years before tying the knot.

“We knew each other for a long time before and he likes to joke, ‘Yeah everyone thinks we got married quickly, but you vetted me for two years,’” she explained on Busy Tonight in November 2018.

The couple welcomed their first son together, Sylvester Apollo Bear, in March 2021. “Sylvester Apollo Bear has joined us earth side. Sly arrived 3/8/21 on the most surreal, beautiful, and love-filled morning of my life,” she captioned a sweet photo of herself holding her newborn on Instagram.

Though the couple typically maintained a low-profile romance, their relationship made headlines after rumors of alleged infidelity swirled around the film producer in July, which the I Feel Pretty actress seemingly confirmed by liking negative social media posts about Sebastian, including one that allegedly read, “Can’t believe that little bitch cheated on emrata,” per Us Weekly.

A source previously told In Touch that the Uncut Gems producer allegedly cheated on Emily “multiple” times, including when she was pregnant with their son. The model officially filed for divorce from her husband in September after four years of marriage, In Touch confirmed.

While Emily and Sebastian appear to be done for good, the We Are Your Friends actress has seemingly moved on with some eligible bachelors.