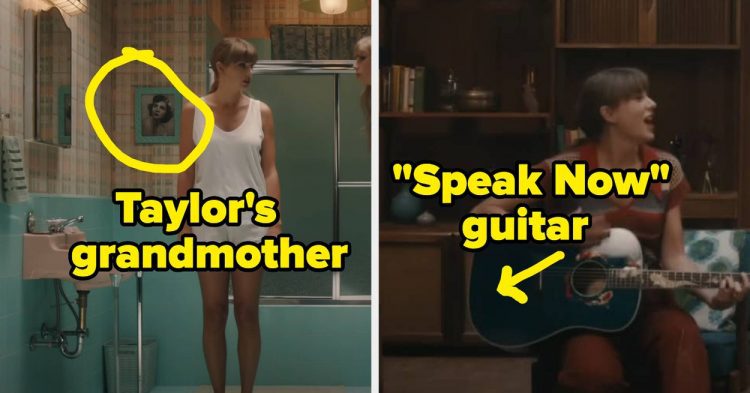 Now, the video does get a bit meta when it comes to listicles like these — with Taylor even declaring, “There’s no secret encoded message that means something else” in her will.

But, that won’t stop me (or apparently Taylor)! So, here are some cool moments you may have missed:

During the bathroom scale scene, a photo of a woman can be seen on the back wall.

If the face looks familiar, it’s because it’s a picture of Taylor’s grandmother Marjorie — who you can see in the “Marjorie” lyric video.

This one is a bit obvious, given that it’s mentioned in the video — but yes, Taylor’s daughter-in-law is actually wearing a dress from the 2009 Fearless tour.

Here it is on Taylor on the first night of the US leg of the tour:

But that’s not the only old tour memorabilia in the video! Like in this scene, where Taylor is playing/smashing an old guitar.

If you look closely, it’s not just any guitar — it’s one of the guitars she used on the 2011 Speak Now tour.

In Taylor’s will, she leaves everything to “Meredith Grey Swift,” “Olivia Benson Swift,” and “Benjamin Button Swift.”

Which yes, are the names of Taylor’s real cats.

One of the things her family feuds over is the fact that her “beach house” will become a cat sanctuary.

It’s likely that the beach house is referring to Taylor’s real-life Rhode Island “Holiday House.” She’s previously explored the home’s scandalous history in the Folklore song “Last Great American Dynasty” — subsequently ensuring that, in this account, the home will be surrounded by controversy both before and after she arrived.

This one might be a bit of a stretch, but anti-hero Taylor rocks a pair of snakeskin boots at the end of the video.

Taylor has gone through a journey with snakes — from Kim Kardashian calling her one back in 2016 to Taylor using snake imagery in a move of reclamation.

Finally, there’s a coat of arms on all the bottles of wine throughout the video.

The idea of a Taylor Swift crest — featuring cats, a butterfly, and a snake — has been floating around for a while now. A similar image popped up in her 2021 vault teaser and in the background for 2019’s “Lover.” So, Taylor coat of arms confirmed???

What do you think of the video? LMK in the comments!