Don McLean Reflects on His Family, Relationship, Career and More 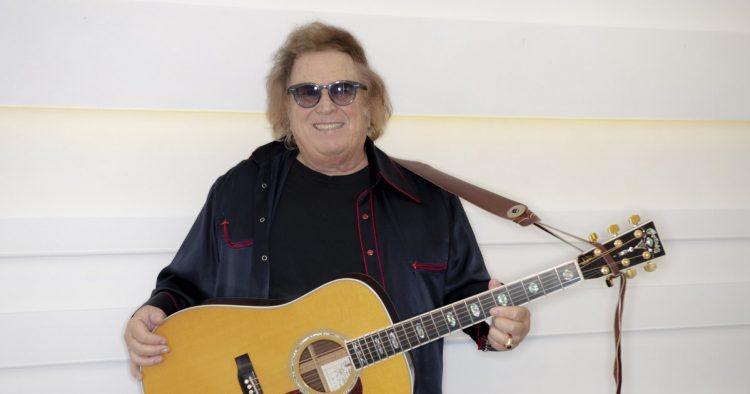 It’s hard to believe that it’s been 50 years since a surprisingly lengthy song about “the day the music died” became No. 1 on the pop charts. Despite the passage of time, “American Pie” — which runs a whopping 8 minutes and 36 seconds — remains a true classic.

Just last year, it was featured in the soundtrack of the Marvel action movie Black Widow and the drama Finch, starring Tom Hanks. To commemorate the song’s release, a new documentary, The Day the Music Died: The Story of Don McLean’s American Pie, is currently airing on Paramount+.

“Everyone from Madonna to Garth Brooks to Weird Al Yankovic has recorded ‘American Pie’ and made it their own,” says singer-songwriter Don, 77, who welcomed the opportunity to explain what his signature song means to him in the documentary.

“So many people throughout the years have asked me what certain lyrics meant or whom I was referring to,” he says. “Now, I finally can solve many of those mysteries.”

OK, we have to ask. Do you ever get tired of performing “American Pie”?

No, I don’t ever get sick of being Don McLean. I’ve got wonderful songs that I wrote that people love, and I’m so happy to sing them for people and let them enjoy what I’ve done. That’s the difference — if you’re in the Beatles and you’re sick of Paul McCartney and John Lennon, you’ve got a problem. I don’t have that problem because I do everything the way I want to do it.

What do you remember about writing “American Pie”?

I had a little room where I would write songs. I had a tape recorder, and I would sit on the bed, get my guitar — I had this idea, and I started thinking back in this nostalgic way. That whole front of the song came in one moment. It was like a genie that came out of a bottle. I knew I was going ahead in a certain direction. Didn’t know whether it was good or bad, but I knew where I was headed.

How did you deal with the fame that came along with the song’s popularity?

That kind of fame is white hot, and it wasn’t easygoing. It was a lot of girls screaming and fainting, and I was on the news every night. There were people jumping out of my bedroom closet. It was like being a Beatle for about a year. Like a teen idol thing — except I was not a teen. I was 25. I looked at it all as very amusing, but I realized that it could be very dangerous.

For a while, I had death threats — every [celebrity] gets those, by the way. What I determined was that, really, you’re not a human being anymore. You’re a thing. You’re an object and an oddity. I realized, “Hey, I’m just a lucky jerk, and this will go away after a while. Hopefully I’ll save my money and have a nice house and be fine.”

Did you always want to be a performer?

I wanted to be exactly what I am. I created Don McLean. He’s a romantic character of some sort, who comes in and sings about everything — what’s in the newspapers and what’s in his heart. That’s how I saw myself.

Was your family supportive?

No, not really. My father, before he died, was very frightened of me attempting to be in any kind of show business world. To him, that was kind of like going off and joining the circus.

What do you consider your big break?

The first one was having Pete Seeger accept me as someone that he would sing and work with. I was writing to him ever since I was in junior high school. He wrote to a lot of people, but it was a big break to be able to be around this great man and see what made him tick and how he dealt with fame.

Did you ever consider another career?

Through the ’60s, when they put me on the road every weekend, I was getting my degree in finance and economics from Iona College in New Rochelle, N.Y., where I grew up. I wasn’t wasting my time trying to be in show business. There came a point when I could have gone to work on Wall Street, but I’m a lone wolf in a lot of ways.

Did you have to make a lot of sacrifices for your career?

Tons! I think it blew out two marriages and damaged people. For a time, it made friendships nearly impossible. Most people I knew at 25, they were lucky if they had any money in the bank or a house. I was a millionaire and wildly famous. The minute somebody found out who I was, they would only want to talk about me and my concerts. But, in a way, I was a good candidate for fame because I wasn’t connected to that many people.

What are you proudest of?

I’m proud that I raised two children who didn’t go to rehab. They are both great human beings and free of any kind of addictions. Sometimes I had to be firm about things, but I am proud of that. I’m also proud of my stamina and my ability to overcome adversity. My least proud aspect is my bad track record with relationships.

Are you in a relationship now?

Yes. I have a great girlfriend, Paris Dylan, who has been with me for seven-and-a-half years. I don’t know what I would do without her. She travels everywhere with me and is the light of my life. I just am thankful for that more than anything.

Did any of your children inherit your talent for music?

They’re very good musicians. My son Wyatt’s an excellent guitar player and songwriter. He’s an intellectual. He’s an expert in the world of fine books and manuscripts. My daughter, Jackie Lee, is a very good singer and a songwriter. She also writes stories and plays and is a very good mother. She has two little girls who are wonderful.

You’re currently on a world tour. How’s it going? What else is planned for “American Pie’s” anniversary?

I’m really excited about playing with my band. I’m drawing nice crowds. We also hope to have a Broadway musical soon. For that project, we will be using 10 to 15 of my songs. It will be my story and the story of “American Pie” and America.