91.530 Le Marais Ushers a French Château Into a New Era 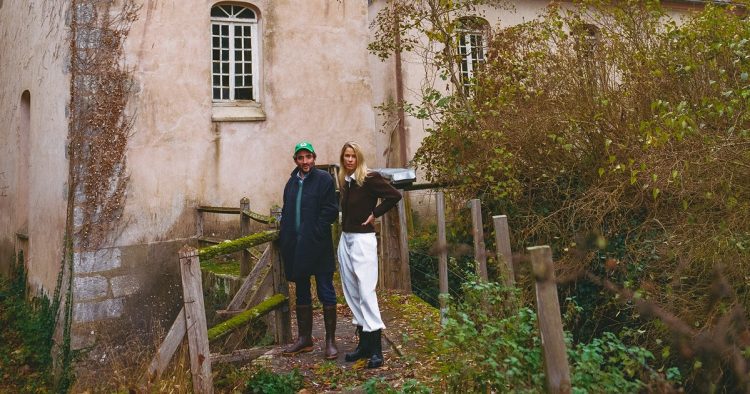 “My father had a book obsession,” says the art dealer Victoire de Pourtalès, touring the overstuffed library in the main Louis XVI–style manor at the Château du Marais, an imposing gold-stone confection on her family’s sprawling ancestral estate outside Paris. Portraits of her illustrious forebears line the walls of a nearby reception room designed for entertaining. “For me, this is such a happy place. It has a great energy,” she says.

The property, where de Pourtalès spent the first years of her life, is only an hour’s drive from the city, past Orly airport, but seems a thousand miles from anywhere, with its 247 acres of rolling farmland and deep forest, and water on all sides (“marais” translates to “swamp”). De Pourtalès grew up swimming in its 1,800-foot-long reflecting pool. It was a magical childhood, she says, with horses to ride and ancient tunnels to explore, and rabbit holes of history down which to get lost. The château has its own 16th-century dungeon, along with a chapel, enough guest rooms to put up a queen’s royal court, and a small family museum that’s open to the public on summer weekends.

De Pourtalès, who sold the prime lease of her Paris gallery, VNH—co-owned with art collector Hélène Nguyen-Ban—to mega-dealer David Zwirner before the pandemic hit, is a direct descendant of Charles Maurice de Talleyrand Périgord, Napoleon’s foreign minister, and of a succession of French popes. Her grandfather Gaston Palewski was a World War II hero, and the longtime right hand to French president Charles de Gaulle.

In the upstairs salon, Jill Mulleady’s Fantom (left), 2018, and Chris Martin’s Untitled, 2005–2009, are a contemporary counterpoint to a collection of antique books, a 19th-century Japanese porcelain vase (used as a lamp), and a point de la Savonnerie carpet. 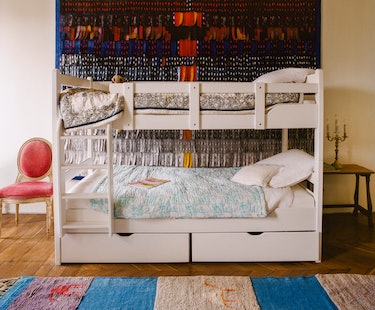 When Covid-19 caused Paris to lock down for the first time, she fled here with her husband, Benjamin Eymère, and their sons, Maximilian, 7, and Théodore, 5. They left behind their Paris apartment, in the 9th arrondissement, for what they imagined would be a short-term escape, and camped out in guest quarters in the château’s original, 17th-century wing. (De Pourtalès’s mother and aunt split the 20 bedrooms and 15 bathrooms in the main building, next door.)

With no art fairs to jet off to, no Fashion Week parties to chase, the usually frenetic couple was soon adjusting to a much slower pace. A few weeks into lockdown, de Pourtalès and Eymère were already brainstorming ideas for making their new life in the country more permanent. “We started walking a lot in the fields, in the forest,” says Eymère. “It’s Victoire’s house—she has known it forever—but for me it was a discovery.”

Even in such grand surroundings, the couple’s pandemic experience followed a now familiar urban-refugee script. They bought a puppy, a rambunctious Jack Russell terrier, and dove into a new home renovation, stripping out the interior of a 17th-century former stablemaster’s house just outside the château gates. It became their primary residence last fall, when they finally moved in.

And, working together, they hatched a new passion project that would marry their interests and shift their professional center of gravity to their new rural home base. The château has a rich history as an incubator of ideas, hosting artists, writers, and intellectuals, from François-René de Chateaubriand in the 18th century to Pablo Picasso in the 20th. De Pourtalès had been inviting artist friends to visit before the world turned upside down. She developed a formal residency program during the pandemic, transforming cavernous wheat barns into exhibition spaces. “We wanted it to be quite organic in the beginning,” she says of the artist residency, “inviting people we knew whose practice would make sense here.”

The Louis XVI–style main residence at the Château du Marais. 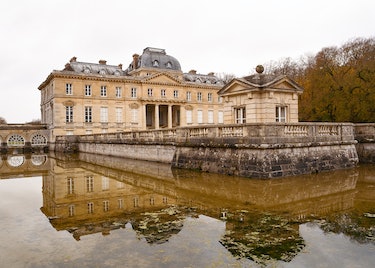 A guest bathroom in Eymère and de Pourtalès’s house, with a 19th-century folding screen and gilded mirror. 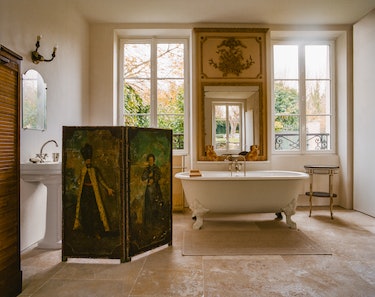 Los Angeles–based ceramicist Grant Levy-Lucero used a mix of local and imported clay to create a collection of Roman-style urns emblazoned with iconic French wine labels; Belgian multimedia artist Edith Dekyndt unveiled an installation featuring light boxes and frayed fabric aged underground on the property; Parisian painter John Fou produced oversize drawings of horses on paper, and hung them from an abstract metal-frame carousel. “It’s interesting how the artists can be inspired by the property, by the history, in a very subtle way,” says de Pourtalès.

Eymère, a media executive and serial entrepreneur who has dabbled in blockchain e-commerce, NFTs, and artisanal sake, among other ventures—with varying degrees of success—explored the agricultural land around the château and began picturing himself as a gentleman farmer. His wife had inherited some 200 acres of wheat fields and horse paddocks when her father died, a decade ago. “We always knew we had to do something with the farm, but we were busy in Paris,” Eymère says. “With both of us here for long hours, Victoire began reconnecting to her farming nature, and I began discovering mine for the first time.”

The result is an ambitious project, 91.530 Le Marais, named for the château’s postal code—and a playful nod, says Eymère, to the ’90s TV series Beverly Hills, 90210—that combines art and agriculture, culture and commerce, under a single umbrella. The focal point is a new multipronged business in hemp, a versatile, ecologically sustainable crop. They planted their first field last year, with plans to transform future harvests into a vast range of products. With a French building-materials conglomerate, they’re developing their own proprietary “hempcrete,” a sustainable concrete alternative, sold in big blocks. They’ll produce hemp textiles for their own label, Maison Sativa, in partnership with the Italian fabric giant Limonta. A distiller in Brittany is working on their hemp gin. “What you can do with hemp is pretty much anything and everything,” Eymère says.

Mai-Thu Perret’s It’s Crooked Like the Pine. It’s Mottled Like the Stone, 2008, hangs above Eric Croes’s glazed ceramic sculpture Dany & Poisson Lanterne, 2018, and an experimental tower made from hempcrete. 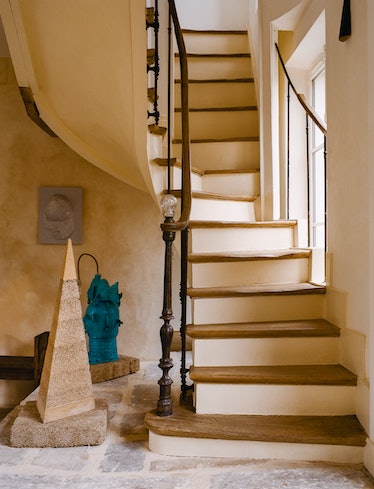 In the first-floor salon, a Louis XVI–style sofa and chairs, paired with wooden benches by Eric Croes, and Cy Gavin’s painting Storm Surge, 2018. 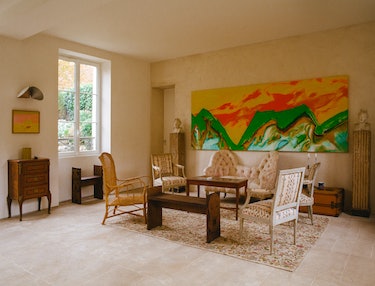 Kulapat Yantrasast, an architect based in Los Angeles and New York who is a partner in the project, drew up plans for a sand-floored arena—to host concerts, polo games, fashion events—in the heart of the hemp fields, anchored by a sculptural gate, a towering landmark built in hempcrete. “I was very excited about the idea that we could grow hemp that would be appropriate for construction,” says Yantrasast, who will be experimenting with the material for the first time.

Surrounding the arena will be a bamboo forest, sprung from 1,500 saplings planted last summer by guests participating in a “seeding ceremony” at an al fresco party—an art, music, and fashion blowout that was broken up late at night by local police. Yantrasast has also planned homes in hempcrete for visiting artists, agricultural scientists, and equestrians on the edge of the property, straddling two sides of a creek. “Not everything is going to happen at once,” says Yantrasast of his master plan for the site. “There will be a gradual growing of the project.”

For now, the headquarters for the whole enterprise, still in its infancy, is the dining room table in Eymère and de Pourtalès’s new country home, where two assistants, one focused on art, the other on hemp, are camped out on dueling laptops on the day of my visit. Eymère is on his own laptop a few feet away, at an antique desk across from a claw-foot tub. He recently began working out of a makeshift office here, juggling his vast range of projects over the past two years. “I like the idea of having different lives,” he says.

The couple collaborated with a young Paris firm, MBL Architectes, on upgrading their cozy stone home, restoring the original wood beams and shoring them up with new steel supports. “We wanted to keep the structure—the floor, the staircase—to have this experience of an old house, but with contemporary touches,” says de Pourtalès. Walls separating small rooms, “like a doll’s house,” she says, came down to make way for a pair of complementary open salons on two floors, connected by a spiral staircase. One salon faces the kitchen, and the other contains a new floor-to-ceiling library bookcase, featuring antique volumes from her father’s collection. Contemporary art fills every corner, paired with antiques from the de Pourtalès family—baronial armchairs, painted wall panels, a pastoral couch in toile. “I want to bring sculptures from the 16th and 17th century in from the castle,” she says, surveying the layout, still a work in progress. “I think they go well with contemporary art—I love to mix.” 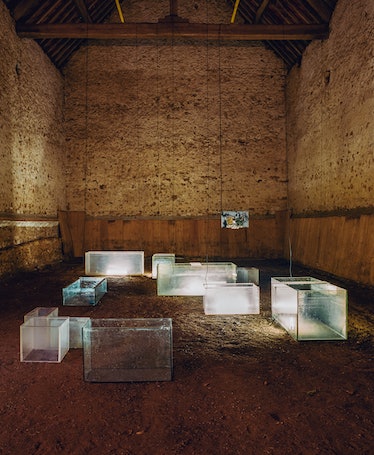 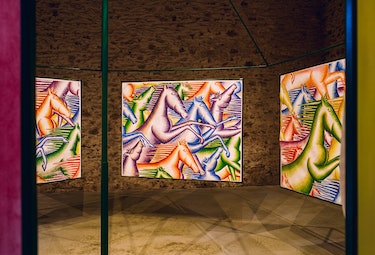 An abstract tableau from Brooklyn painter Chris Martin has pride of place in the second-floor living room. Another large painting—a signature upside-down portrait—is from the German neo-Expressionist artist Georg Baselitz, who is represented by the Paris gallery Thaddaeus Ropac, where de Pourtalès started her career in the art world.

Many other works on display are by artists of Middle Eastern origin, a special area of interest for de Pourtalès. Around the house are abstract paintings by Ali Banisadr and Latifa Echakhch; a painting of a setting sun is from the celebrated Lebanese-American novelist, poet, and visual artist Etel Adnan, who died in November. De Pourtalès organized a show with Adnan, focused on the horizon as a source of artistic inspiration, in Paris a few months before her death. Architectural wallpaper in a bamboo pattern, from London-based Iksel Decorative Arts, frames the window in the couple’s bedroom.

A gas fireplace located between the kitchen and dining room is set in a tower of rough-textured tiles, cast with a mix of man-made and natural detritus by Mimosa Echard, a young French artist whose work de Pourtalès promoted early on. Even the bedroom their sons share is a showcase for contemporary art, with a Takashi Murakami throw pillow and a large textile piece hanging behind their bunk bed, by the West African artist Abdoulaye Konaté. “For us, it’s great for the kids to be able to grow up here,” Eymère says. “We are in this house. Our kids are going to own this one day. Our exercise was to take the land we have and say, how do we make it meaningful?”

Eymère and de Pourtalès in the bamboo forest they planted with help from friends. 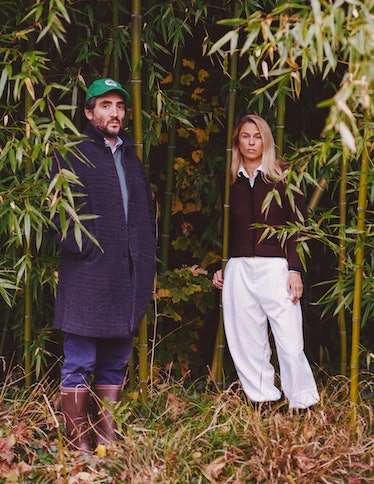