Some states are bracing for a huge influx of patients if Roe Falls : Shots 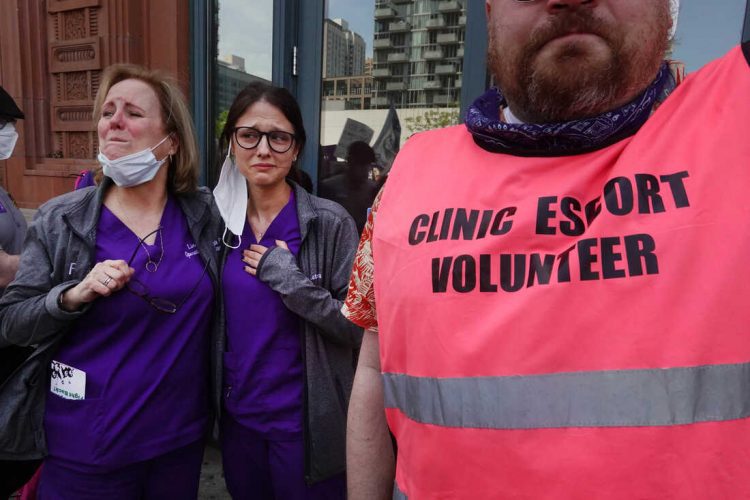 Workers at a family planning health center get emotional as thousands of abortion rights advocates march past their clinic on their way into downtown Chicago on May 14, 2022. 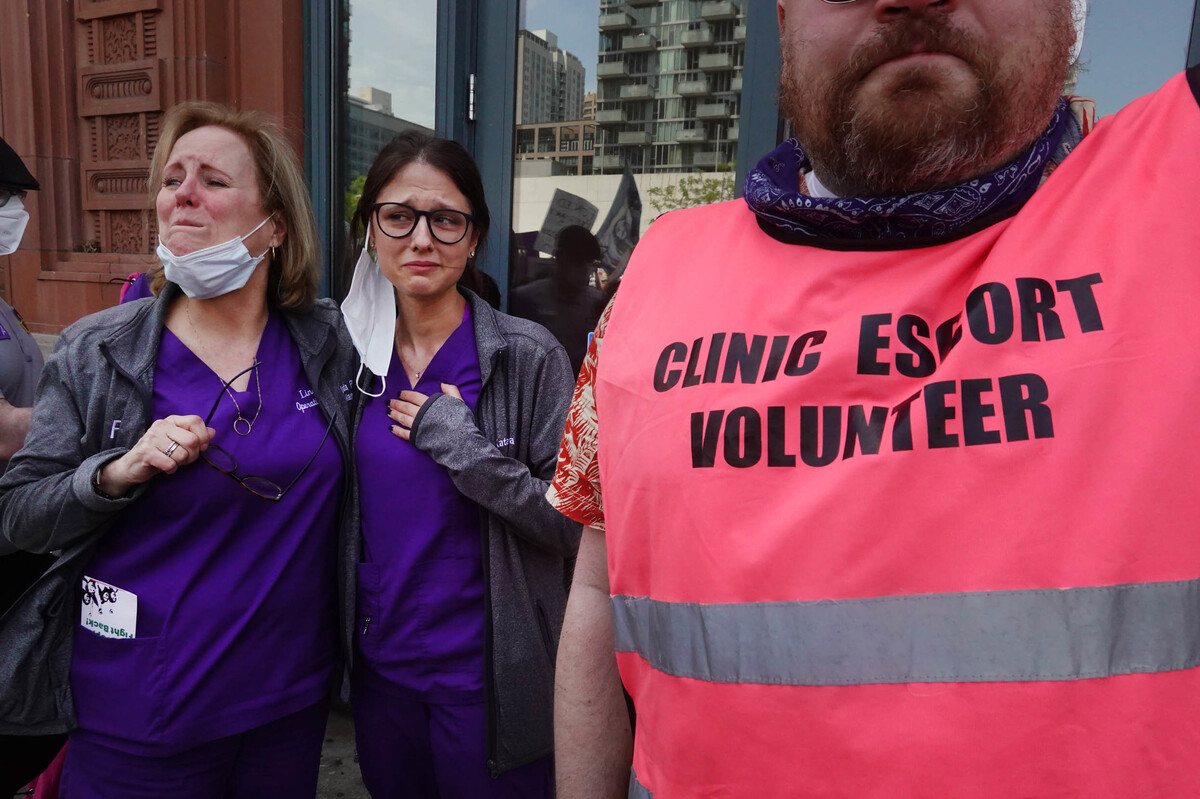 Workers at a family planning health center get emotional as thousands of abortion rights advocates march past their clinic on their way into downtown Chicago on May 14, 2022.

Across the U.S., health clinics that offer abortions are gearing up for a huge migration of patients from the more than two dozen states that are likely to ban abortions, if the U.S. Supreme Court overturns Roe v. Wade.

Some warn they will not be able to handle the surge in demand.

The nation’s high court will soon deliver its ruling in a Mississippi case that could eliminate the nationwide right to abortion. A leaked opinion from the court — while only a draft — has already signaled that as a likely outcome.

If that happens, the health care landscape could transform in a matter of days and weeks. Abortion bans could take effect across across huge stretches of the country. Millions of women would be forced to travel hundreds or even thousands of miles to the remaining states where abortion is expected to remain legal.

“The current infrastructure — the clinics — don’t have the capacity to absorb all of these patients,” says Melissa Fowler, chief program officer for the National Abortion Federaiton, which represents all kinds of medical providers in the U.S. and Canada.

A hint of what’s to come … Texas

There’s no precedent for the upheaval that could result from overturning the Roe v. Wade decision.

But clinics that provide abortions already have a hint of what’s to come — ever since Texas passed its highly restrictive 6-week abortion ban in the fall of last year. Almost immediately, women from Texas started showing up in waiting rooms in states both near and far.

“We know that’s a precursor to what we expect to happen across the country,” says Amy Hagstrom Miller, CEO of Whole Woman’s Health, which operates clinics in five states.

At their Minneapolis clinic, she says about a third of the patients are coming from Texas. One patient recently drove all the way from McAllen, Texas — on the Texas-Mexico border — to their clinic in northern Virginia.

The ripple effects are also being felt in Western states like Colorado, Nevada and New Mexico where wait times at some clinics have grown considerably since last year.

The increased strain doesn’t just affect those coming from out of state. It’s also displacing patients who live locally and now are waiting longer for an appointment, she says.

Some states may very well end up as an island of abortion access, surrounded on all sides by states that have enacted bans.

In Granite City, Ill., the Hope Clinic for Women has essentially dealt with this dynamic on a smaller scale for years. That clinic sits just across the river from St. Louis, Mo., where restrictive laws have already made it challenging for most women to get an abortion.

Most of the patients come from outside Illinois — and not just Missouri, but also states like Mississippi, Louisiana and Texas, says Dr. Erin King, the executive director at Hope Clinic.

“Those are not states that you really think of as very close, but they’re closer than a lot of other options, and really, one of the last options some of these folks have,” she says.

Dr. Charlie Brown, who practices in Seattle and Las Vegas, already sees patients from Texas and all over the country where existing laws make it hard, if not impossible to get the procedure.

“As it is right now, it’s hard for many people in many states to actually access these services,” says Brown, who notes that not many doctors are trained to do second-trimester abortions.

If many states end up outright banning abortion, more women may have to delay because of long travel and wait times. Brown worries that could cause more people to have to get second-trimester abortions.

“It’s going to be that much more difficult for those patients to seek out places where they can get those services, because we can only accommodate so many patients.”

Can they keep up?

While the leaked draft caught many by surprise, it doesn’t come as a complete shock to abortion providers.

“We have been preparing for this worst-case scenario for many years,” says Fowler.

Many health providers have long contemplated this prospect and have taken incremental steps to expand their capacity: adding staff, creating new locations and offering telehealth to stretch their services.

“It’s a full court press,” says Tocce of Planned Parenthood of the Rocky Mountains. “We are going to be faced with a tremendous influx of patients.”

It’s hard to know the full impacts just yet, but they could be profound: About a third of all abortions occurred in states that are expected to make it illegal, according to the most recent nationwide data collected in 2017 by the Guttmacher Institute.

If Roe falls, the Hope Clinic anticipates about a 40% increase in patients seeking abortions by the end of this year alone. The clinic has doubled its number of doctors in recent years, but its expansion plans had not factored in the pandemic and the current labor shortage, especially in the health care sector.

“We are scrambling to try to find qualified people,” says King.

Despite their best efforts, she expects they will not be able to see everyone who needs care: “We’re going to be saying no to a lot of patients.”

There are also many outstanding questions about how exactly the workforce will adapt to the changes in state laws, says Julia Strasser, a senior research scientist at George Washington University’s Fitzhugh Mullan Institute for Health Workforce Equity.

“The workforce that can provide this care will be dramatically reduced,” she says. “What we don’t know yet is to what extent providers will either drop out of the workforce altogether, or whether they will leave a state that is restrictive and go practice in another state that is less restrictive.”

Some parts of the country do feel better equipped to deal with the uptick in patients, though.

“We have a lot of ability to increase capacity,” says Dr. Laura Dalton, medical director of Planned Parenthood Mar Monte, which is the largest affiliate in the U.S. with more than 30 clinics in California and Nevada.

“When women come to California, we will be able to take care of them — absolutely,” she says. “But there will be a lot of women who won’t be able to travel and maybe more importantly, who shouldn’t have to travel.”