Future of Abortion Training for Medical Residents Is Bleak 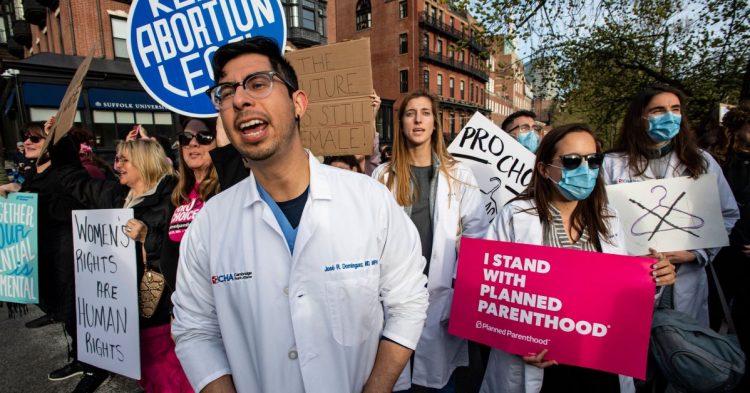 In 2021, Dr. Mallika Govindan, a family medicine resident at Mount Sinai Health System, got disappointing news. Even though she had pursued a career in medicine in order to become an abortion provider—and had chosen a residency in New York City, where she felt she would get the best training—she wouldn’t be able to learn how to provide abortion care locally. Because of pandemic precautions, Planned Parenthood New York City, which trains many medical residents, had to scale back its abortion training program.

Govindan spent months researching other options and applying for scholarships. In February 2022, she traveled to Chicago for 12 days of abortion training with a reproductive health care nonprofit.

It was hard for Govindan to get abortion training—but in Chicago, she kept hearing murmurs that it might soon get even tougher for medical residents like her. The abortion providers supervising her said that training residents might become more challenging if Roe v. Wade were overturned; as clinics in places like Chicago stretch their capacity to meet rising demand for abortion care from people traveling from states where the procedure is banned, they might decide to stop training residents from out-of-state to accommodate the influx of patients.

Govindan worries that making abortion training even less accessible to doctors will make it much harder for people to get proper care. “There’s such a shortage of doctors and providers as a whole,” she says. “The [number] who are willing to do this is even smaller.”

Abortion training for medical residents is already a logistical nightmare in the U.S. Ob-gyn residencies are required by the Accreditation Council for Graduate Medical Education (ACGME) to offer abortion training in order to be accredited, though residents can opt out if they choose. Training usually consists of a weeks- or months-long rotation at a local abortion clinic or hospital. But these sites are in short supply. Nearly 90% of U.S. counties do not currently have a clinic that provides abortion care—meaning the ones that do exist are likely to be overrun by both patients and trainees if Roe v. Wade is overturned. According to an article published by the American College of Obstetricians and Gynecologists (ACOG) in April, nearly 44% of current ob-gyn residents in the U.S. are training in states that are certain or likely to ban abortion should Roe v. Wade be repealed.

In a statement, an ACGME spokesperson said the organization is preparing for the Supreme Court’s decision. “Should it become illegal in some states to perform aspects of family planning, the ACGME is exploring alternative pathways for completing this training. At this time, the ACGME requirements remain the same”—including that all ACGME-accredited ob-gyn programs must have family-planning curriculum and “experiential training in the complications of abortions and the opportunity for direct procedural training in terminations of pregnancy. Access to experience with induced abortion must be part of the curriculum in order to ensure that physicians in training have the opportunity to gain the experience necessary to care for all of their patients’ needs.” Programs that restrict abortions or other family-planning services “must arrange for such resident training to occur at another institution.”

In a state like Utah, it’s already hard to be an ob-gyn, says Dr. David Turok, associate professor in the University of Utah department of obstetrics and gynecology and chief of the division of family planning. A state law enacted in 2017 requires doctors to tell their patients seeking abortions several lies that aren’t backed by science, Turok says, including a requirement to say that the abortion medication mifepristone is reversible. Providers are also required by law to give patients pain medication—for the fetus—20 weeks or more into a pregnancy, which doctors say is scientifically unfounded. But the looming abortion restrictions if Roe v. Wade ended would be “on a whole different level,” Turok says.

Turok is already planning to send his ob-gyn residents to other states for training should Utah ban abortions, which is expected to happen immediately after Roe is overturned. One other option may be simulated procedures—such as practicing techniques on a dummy—which are common in residency programs. However, he fears it won’t be good enough. “By limiting the care and limiting the training, you’re essentially compromising the quality of the care,” he says. “I’m not worried; I’m terrified.”

There are signs that abortion training is already inadequate in the U.S., especially for abortions beyond those administered in the first trimester. According to research published in 2018 in the American Journal of Obstetrics and Gynecology, only 71% of residency directors who responded to a survey thought their ob-gyn graduates were competent in an abortion procedure common early in pregnancy called first-trimester aspiration, and only 66% felt residents were sufficiently trained in medication abortion. A mere 22% of directors thought their ob-gyn graduates were competent in other abortion techniques, including dilation and aspiration, commonly used in the second trimester.

That lack of knowledge might be, in part, due to access issues. In some ob-gyn programs, residents are responsible for fitting the training into their schedules themselves, which can be burdensome, while others face restrictions at their hospitals that limit where and how the procedure is performed, according to ACOG. Many religiously affiliated hospitals don’t provide abortion services at all.

Dr. Debra Stulberg is chair of family medicine at the University of Chicago and the training director at Midwest Access Project (MAP), a reproductive health care nonprofit that helps connect residents—including Govindan—to abortion training. She says MAP gets a lot of inquiries from residents at religious hospitals, as well as from residents in specialties whose programs do not always offer much abortion training, but who may need it as much as an ob-gyn. Family medicine doctors, in particular, are major providers of abortions in the U.S., especially in underserved rural areas—but often aren’t provided the proper training. “Even if they have [the] opportunities,” says Stulberg, “they may be only a few days in a clinic and not enough to really develop the competency that they need.”

To augment their training, many such residents end up needing to travel to other states. But that won’t be a solution to the drastic shortage of training opportunities that could develop if abortion is all of a sudden illegal in many states, says Dr. Kavita Vinekar, an ob-gyn specializing in complex family planning who co-authored the ACOG commentary. “[It] won’t be feasible at this scale,” she says. “The reality is that we are never going to be able to arrange for close to 44% of our residents to travel away from their home institutions, away from hospitals that completely rely on residents to function, to be able to obtain the necessary training.” She and her co-authors suggest that residency programs may need to instead beef up miscarriage training, which overlaps with abortion training, and incorporate simulations to help make up for this deficit.

Finances are another obstacle for residency programs that take on or lose residents to travel. A hospital’s budget for graduate medical education, which is paid through Medicare, doesn’t travel with the resident, so new funds must be found to pay their salary during the part of the family-planning rotation that includes abortion training and can last several weeks, says Dr. Laura MacIsaac, professor and associate director of Fellowship in Family Planning at Icahn School of Medicine at Mount Sinai. “I have visiting residents that come to New York with that request, but we do have so, so many requests, and we really can’t honor all of them,” says MacIsaac.

Turok, from the University of Utah, worries that states that outlaw abortion won’t be as appealing for ob-gyns to learn or eventually practice in. The states likely to ban abortion in the case Roe is overturned “don’t realize that they’re digging a major hole into the quality of medical care that they will be able to provide and the people that they will be able to train and retain in their states,” says Turok. “What health care provider wants to practice in a state where they can’t provide the full range of services to their patients?”