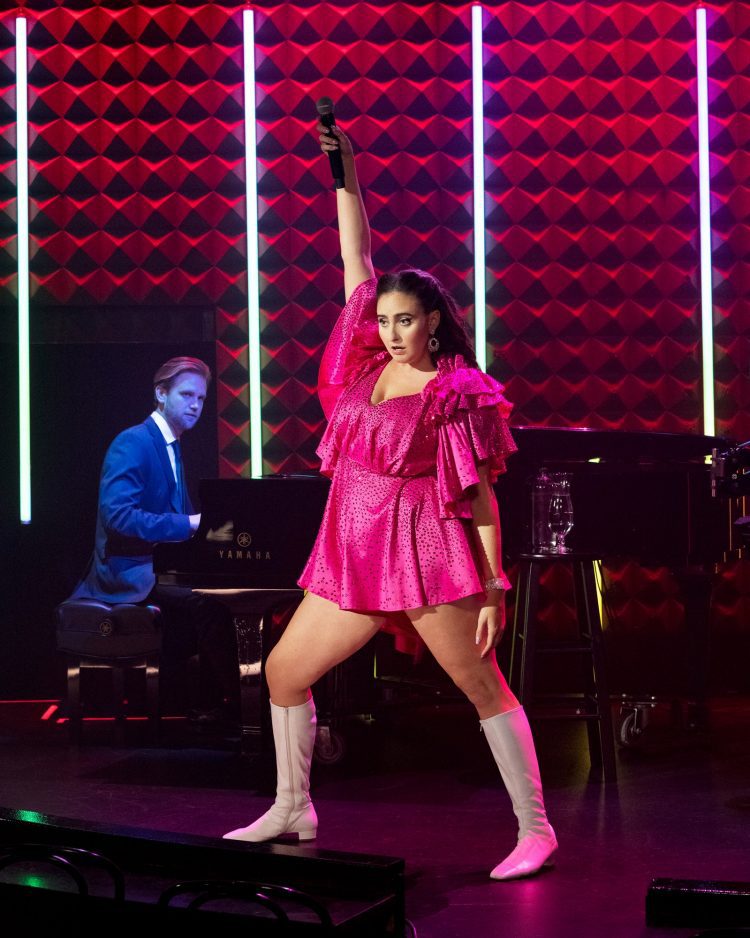 “I’m starting a show! I’m Catherine, and I’m very beautiful!” says the toddler twirling around in a tutu at the beginning of Catherine Cohen’s comedy special, The Twist…? She’s Gorgeous, which premiered March 15 on Netflix. The little girl in the home movie is, of course, Cohen herself, two years old and already declaring her fabulousness. There seems to be little difference between that girl and the now 30-year-old woman who marches all over the stage in a bespoke hot pink rhinestone romper and white go-go boots, cheekily telling her audience, “You look at me, you think, Okay, she has it all—and it’s true.” But according to Cohen, it took a lifetime to regain the robust confidence of her younger self.

“I was raised by parents, my dad especially, who are, like, obsessed with me and are like, ‘You’re fucking amazing,’ and then the world tries to knock you down,” Cohen says on a cool spring day over coffee in the East Village in New York. She’s wearing an outfit her toddler self might have approved of: cat-eye sunglasses, workout clothes, and a cream-colored leather jacket with fluffy trimming that resembles poodle fur. “At home,” in Houston, Texas, “I was always told, like, ‘You’re a genius!’ My dad will literally answer the phone with, ‘How’s the most perfect girl in the world doing today?’” She laughs. “So I’ve always had that sense of myself, even if the world is like, you don’t fit into the clothes we have in stores, or, guys aren’t interested in you, or all these things that are always hitting at women’s self-confidence. But I always was like, But no, I’m the best, right?”

Her comedy special explores this very tension between women’s capacity for self-love, and sexism’s insistence that women doubt and even hate themselves. Her flouncy, bubbly, hyperconfident diva persona, for all her silliness, is also a subversive who talks about some of the same things Mary Pipher wrote about in her classic tome on girls’ development, Reviving Ophelia (1994), and Simone De Beauvoir discussed in her feminist manifesto The Second Sex (1949) before that. Cohen went to Princeton, majoring in English, but claims, “It’s all a blur—I joke that all I learned in college was how to walk around a courtyard crying about a boy. Like, did I even read a single book?” She seems as resistant to being called serious as does her onstage persona—an ostentatiously glamorous young woman whom she describes as having “extreme hostess vibes,” and who seems to refuse to be made to feel ugly by the ugliness of all the things she’s talking about (body dysmorphia and sexual assault, among other difficult topics).

Watching Cohen for the first time made me think about the contrast between what she’s doing in her act and the female comedians I grew up watching on TV as a little girl: Great comedians like Joan Rivers, Phyllis Diller, and Totie Fields, who seemed to be able to get away with being funny only by calling themselves ugly. Cohen’s approach is lighter and more joyous. “Boys never wanted to kiss me, so now I do comedy,” she sings (“Oh, my God, I have an amazing voice,” she says onstage after a belting out a long note) in one of the hilarious songs in her special, accompanied by her pianist and collaborator Henry Koperski.

She and Koperski met through a friend in 2015 and started doing their show every week at Club Cumming, Alan Cumming’s cabaret bar on East Sixth Street, two years later. “They’re my everything,” Cohen says of the club’s predominantly gay clientele. “I always say I do it for the gays and the girls—the girls of every gender.” The gig, she says, has allowed her to workshop material and find her voice: “They let me do my thing every week when I had nothing going on.… I start from a place of what’s bothering me and then try to find out what seems universal.”