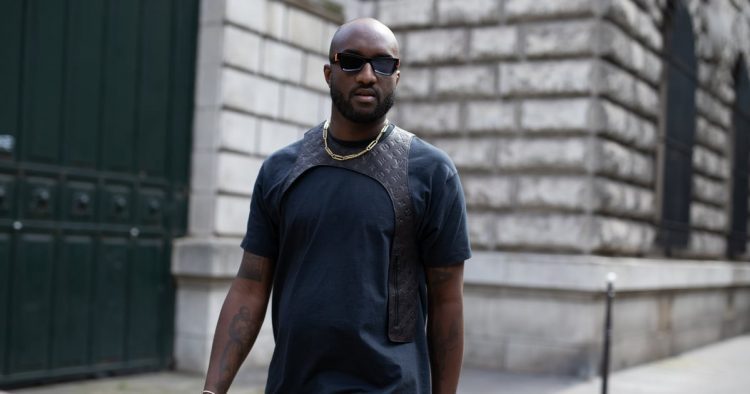 The fashion community, the art and design space, and people all over the world continue to mourn the passing of the late Virgil Abloh. First, there was a heartfelt Louis Vuitton men’s show activation at last year’s Art Basel. That event was followed by a star-packed Fall 2022 Off-White collection debut, where Naomi Campbell, Serena Williams, and OG supers Cindy Crawford and Helena Christensen walked the runway in his honor. The latest tribute is a series of activations that pay homage to the legacy of the multihyphenate titan.

Louis Vuitton is launching a series of activations, retrospectives, and capsules as part of their effort to honor Abloh’s immeasurable impact, strong visual and design language, and longstanding partnership with Louis Vuitton. First up is an immersive exhibition, Louis Vuitton and Nike “Air Force 1” by Virgil Abloh, which has taken over an expansive warehouse in Greenpoint, Brooklyn. Open to the public from May 20 to 31, 2022, the exhibit showcases the creative dialogue between Nike and Louis Vuitton as envisioned by Abloh, the maison’s men’s artistic director.

With its hologram floor and sky-blue walls adorned with “LV” and “Virgil” spelled out in clouds (taking inspiration from the Louis Vuitton Fall 2020 menswear show), the exhibit centers the 47 editions of the Nike “Air Force 1” sneaker created by Virgil Abloh in partnership with Nike for Louis Vuitton.

The show offers an in-depth view of the sneakers created by the designer in the summer of 2021 through his own inimitable lens, from the ideation of the exhibit space — which captures Virgil’s push for people to reconnect with their inner child — to the concept of presenting the sneaker as a form of high art. The 47 editions of the Louis Vuitton and Nike “Air Force 1” are exhibited in motion on magnetized walls and in holographic displays animating the sneakers. Fans can also deconstruct the sneaker, seeing the artisanal layers of the shoe from the sole to the uppers through an interactive 3D station.

Throughout his career and through his own distinct lens, Virgil drastically changed the landscape of art, fashion, music, typography, and pop culture. From changing the way luxury fashion approaches streetwear design, to merging fashion and music, to giving visibility to marginalized creatives, his presence is felt to this day. His legacy continues to inspire masses of young multihyphenate creatives to “Dream Now.”

In addition to this interactive experience, a number of corresponding installations will take place in New York City and around the world. Fans and admirers can experience the five installations exhibited throughout the city at Domino Park, Grand Central, South Street Seaport, Astor Place, Columbus Circle, Flatiron Plaza, and Gansevoort Plaza. Later this summer, Virgil’s traveling exhibition, Figures of Speech, will also occupy space in Brooklyn at the Brooklyn Museum.

Ahead, see inside the exhibit and inside scenes from the opening party, and check out a few of the Virgil-designed Louis Vuitton Air Force 1 styles.