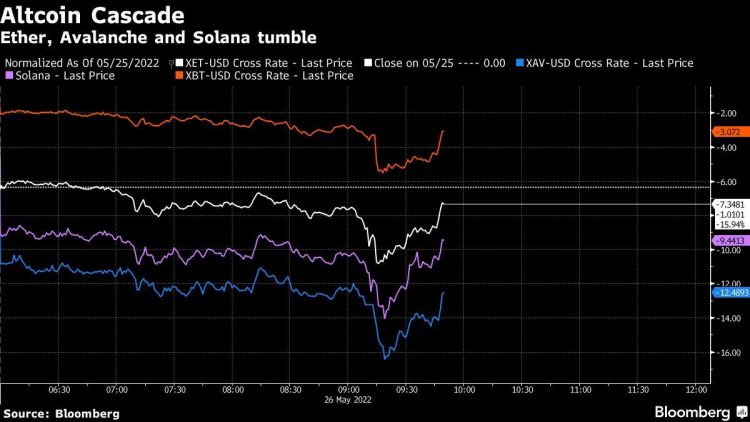 (Bloomberg) — It’s an all-round sea of red for nearly everything in crypto, with altcoins such as Ether, Solana and Avalanche taking a beating. Traders are partially stumped, but for Ethereum, the signs of a lack of demand have been building for quite some time.

The impact of the collapse of Terra, a blockchain ecosystem that supported one of the biggest experiments in decentralized finance, knocked an already bearish market into wild contagion this month. While Terra’s operators had passed a revival plan to start afresh on a totally new blockchain on Wednesday, investors in the rest of DeFi were less than convinced. A glitch in the process to make the Ethereum network less energy intensive added to the concern.

“Bearish sentiment remains the theme for cryptos,” said Edward Moya, senior market analyst at Oanda. He noted that Ethereum’s growing list of competitors could make the fallout from unexpected hitches to its update, known as the Merge, particularly intense.

Ether fell as much as 5.3% on Friday in Asia to around $1,729, taking this year’s losses to 53%. It’s far below the key threshold of $2,000 which it needs to trade above meaningfully — and soon — if bearish sentiment is to ease. Other tokens linked to protocols popular with decentralized finance projects like Avalanche, Solana and Polkadot were also slumping, down between 5% and 8% on Friday.

Bitcoin acted as somewhat of a haven, sliding around 1.8% after dropping to as low as $28,007. Still, the largest cryptocurrency decoupled Thursday from US equities after recently mirroring price changes in risk assets in recent weeks. Stocks continued to rebound from the lowest levels in over year.

Demand for blockspace on the Ethereum network has reduced significantly in the wake of Terra’s collapse, which means that consequently, the network’s so-called gas fees are falling. With the exception of a few spikes during high-profile minting events like Yuga Labs’ Otherside land sale, Glassnode data show gas prices have been trending downward since December and recently reached multiyear lows.

“Even though it was just a single anecdotal day’s data, Solana’s NFT volume surpassing Ethereum is a significant blow to investor confidence that it will remain the go-to base layer protocol of the decentralized web,” added Mati Greenspan, founder of crypto research firm Quantum Economics. “That said, the entire crypto market is down right now so we should be weary about making any long term conclusions from short term data.”

Coupled with poor price performance, that’s likely to exacerbate headwinds for the token in the short term. DeFi developers are dusting themselves off after Terra’s collapse halved the sector’s total value, and dampened markets aren’t going to help in convincing them that now’s the time to get back in the game.

The Ethereum beacon chain, which plays a crucial part in the network’s highly anticipated technical upgrade, experienced a potential security risk called the reorganization on Wednesday.

“Part of the ETH drop is due to the reorg issue which might mean a delay in expected Merge timing,” said Noelle Acheson, head of market insights at Genesis Global Trading. When mixed with the context of the global macro environment, Pantera’s Semir Gabeljic said the resultant jitters meant “bad business”.

Investors who once were hot on crypto have also cooled on its prospects, as the Federal Reserve’s rate-hiking regime spurs volatility in the market and dulls previously-hot growth and speculative assets. Guggenheim Partners Chief Investment Officer Scott Minerd said this week he expects Bitcoin to fall to $8,000. He had once predicted that it could reach $400,000.