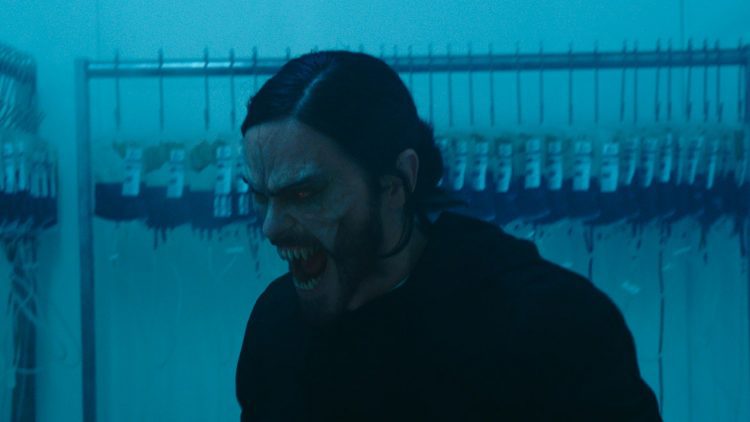 Superheroes have, to hear marketing professionals tell it, wormed their way into conspiracy thrillers, family comedies, grief dramas, and other genres outside the specific confines of bodysuit rock-’em-sock-’em. It’s a natural evolution, then, that a superhero should find himself in the realm of horror. Enter Dr. Michael Morbius, the titular figurehead of the new film Morbius (in theaters April 1). A dying scientist who mutates himself into a half-man, half-bat creature in an effort to cure himself of a blood disorder, Morbius is, for all intents and purposes, a vampire. Boo!

The curious fun of Daniel Espinosa’s film is in how it embraces the gothic mythology that inspired it. Morbius does eventually become a cluttered slugfest, as all things must. But for much of its run it is a stylish, intriguingly toned story of a man trying to thwart mortality.

The film opens on an ominous cave in a remote Costa Rican jungle. It then jumps back in time to a stately residential children’s hospital in Greece that seems more 1930s than 1995, before catching us up to the present in a looming and night-lit version of New York City. Morbius has a sense of place—and an interest in interesting places—that distinguishes it from the gleaming, anonymous Atlanta pop of so many other superhero films.

Does Morbius know that, in all its shiver and portent and moody eyes and long hair, it’s a little silly? I think so—a few vampire jokes peppered throughout suggest as much. So does the presence of Jared Leto, our aging screamo prince and a committed chameleon of an actor. But blessedly, the film does not try to court knowing chuckles; there is none of Venom’s creaky snark here. Morbius has a seriousness of intent, and is all the more engaging for it.

Dr. Morbius is steadfastly devoted to his work, and principled about it. He’s just turned down a Nobel Prize because he will not accept accolades for an unfinished experiment. He’s got good bedside manner with children, a soft touch contrasted by the fact that he is usually dressed like Johnny Cash at Milan Fashion Week. There’s a possible romantic interest in his orbit, fellow doctor Martine (Adria Arjona), but the real love of his life is Milo (Matt Smith), a childhood friend from that Greek hospital who lives in frustrated opulence in an ornately appointed Manhattan apartment.

Milo has a Sebastian Flyte flounce about him. He’s a bored aristocrat, gloomy about his failing health (he has the same vague affliction as Morbius does) and funneling as much cash as he can into Morbius’s research. Bonded by their lonely childhoods and now a mounting desperation to escape their circumstances, Morbius and Milo share a more complicated rapport—and a more deeply homosocial one—than do many a hero-villain pairing in movies such as this. Steve Rogers and Bucky Barnes wish they had this brothers-in-misery chemistry, all its boarding school angst and platonic passion.

This also makes Milo a better villain than we often get from the CGI content factories; he gives Morbius something like literary stakes. While Leto humbly gets out of his way, Smith—who already looks like a vampire without all the makeup—plays his part with an alluringly haughty menace. Particularly in a well-worded scene in which Milo argues with his longtime caregiver/father figure, played by Jared Harris. (Matt Sazama and the gloriously named Burk Sharpless wrote the screenplay.) There is something strangely sophisticated about the milieu of Morbius, its sad fancy boys pouring their resources into a mad bid to gain mastery over their fate. It’s almost Mary Shelley.

Espinosa—who tends to elevate the standard-issue genre films he’s handed (look to his terrifically unsettling, and underseen, alien thriller Life for the most compelling evidence of that)—brings this tortured human drama to the fore while surrounding it with the whizbang required of a studio project. The New York he’s cobbled together out of locations in London and Manchester is appropriately teeming and sinister, while the special effects are mostly used with pleasing visual purpose.

Once Morbius has taken a risky cure of his own making, melding his DNA with that of Costa Rican vampire bats, he rapidly develops new abilities, which include acrobatics and, eventually, flight. To illustrate that speed, Morbius’s high-flying produces a vaporous trail, just as the Death Eaters do in the Harry Potter franchise. The device is a bit derivative in that way, but it looks nice, even when the necessary climactic battle sequence teeters into incoherence.