How Loneliness Affects Your Health 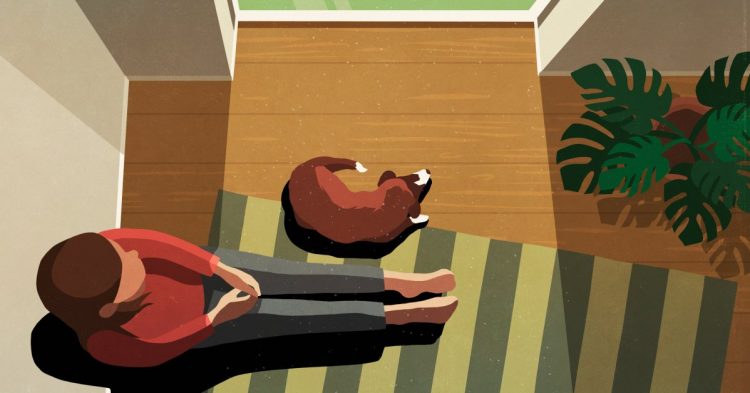 When the pandemic first began, many experts feared that even people who managed to avoid the virus would suffer from unprecedented levels of loneliness. What would happen when millions of people were told to stay at home and distance themselves from friends and loved ones?

Two years of research later, experts have found that the pandemic did make Americans slightly more lonely—but loneliness levels were already dire enough to pose a threat to mental and physical health. Here’s what you need to know about loneliness and how to address it in your own life.

Who got lonelier during the pandemic?

The increases are “so tiny, and they actually don’t mean anything clinically at all,” says Pamela Qualter, a professor at the University of Manchester in the U.K. who studies loneliness (but who was not involved in the research). “Given that we were all at home for big lengths of time, I think it showed how people are really resilient. They worked out ways to manage that loneliness.”

But even if the pandemic-era increases are small, loneliness is still a major issue. One Harvard survey conducted during the pandemic found that 36% of Americans—which includes 61% of young adults ages 18-25—feel lonely frequently or almost all the time.

Other research during the pandemic found significant increases in loneliness among groups already at higher risk for it, including low-income people and those with mental health conditions. Young people, who tend to be lonelier than those in middle age, also became more lonely.

There are likely multiple reasons why young people seem to suffer from a lack of social connection, says Julianne Holt-Lunstad, professor of psychology and neuroscience at Brigham Young University and a longtime loneliness researcher (who was not involved in the study). Older people may have developed better coping skills over their lifetimes to deal with stressful periods, she says. Young people may also feel pressure to have expanding social circles—a hard bar to clear during a pandemic—and some may struggle if they feel like their relationships fall short. That could be part of the reason social media may make people more lonely, she says. “If you see everybody else looking much more social than you are, you may be less satisfied with your own social circumstances.”

There’s no real silver lining to the pandemic, but many mental-health professionals point to one upside: more people are feeling comfortable talking about mental health and the role that loneliness can play in mental-health disorders. The topic has come to the fore of both conversation and research.

Researchers who study loneliness say that it hasn’t always received the kind of attention it deserves as a major threat to health. Primary care doctors and even therapists don’t regularly screen their patients for signs of loneliness. However, that was starting to change even before the pandemic, especially in richer parts of the world. For instance, the U.K. appointed its first Minister of Loneliness in 2018.

But the pandemic accelerated these efforts. Japan followed the U.K.’s lead by also appointing its own inaugural Minister of Loneliness in 2021; the European Commission’s Joint Research Center launched new research efforts during the pandemic into studying loneliness in the E.U.; and public health leaders, including U.S. Surgeon General Dr. Vivek Murthy, have repeatedly raised loneliness as a public-health issue during the pandemic.

Most consequentially, the World Health Organization (WHO) also finally started paying attention to loneliness during the pandemic. WHO is considering creating a high-level commission to address social connection, isolation, and loneliness, says Christopher Mikton, a technical officer in WHO’s department of social determinants of health.

The goal is to persuade lawmakers in countries around the world to expand data gathering on loneliness and fund research to enable scientists to understand it better and find ways to address it—and also to hasten the uptake and development of solutions, such as cognitive behavioral therapy and peer support.

Despite a growing body of evidence of the importance of loneliness, “we haven’t done very much, and we’ve now decided to really step up our activities in this area,” says Mikton. “This isn’t the kind of soft issue that can be brushed aside. The health impact is serious.”

Nearly a third of Americans reported feeling lonely at least some of the time, according to an Ipsos survey released in Feb. 2021. But just because loneliness is common doesn’t mean it’s not dangerous. When loneliness persists, affecting someone for weeks or even years, it poses a serious threat to people’s mental and physical health. “I think most people recognize that it impacts our emotional well-being, and maybe even our mental health, but very few people recognize the profound effects that it has on our neurobiology, which influences our long-term health,” says Holt-Lunstad.

Research has found loneliness can significantly increase the risk of early death. In part, that’s because it’s linked to a striking number of disorders, including cognitive disorders like Alzheimer’s and other types of dementia, and mental health disorders like depression, anxiety, and schizophrenia. Loneliness has also been linked to cardiovascular disease, stroke, Type 2 diabetes, cancer, and other chronic illnesses.

What can help with loneliness?

There’s no one-size-fits-all solution, says Michelle Lim, the scientific chair of Ending Loneliness Together, a network of Australian organizations, who also researches loneliness at Swinburne University. Instead, it’s important to find solutions that suit individuals. For instance, she says, while some people might think it makes sense to join a social group, that might not appeal to someone who is introverted or dealing with social anxiety.

The key to beating loneliness, she says, is not just increasing the number of people a person sees, but making more fulfilling social connections, including by seeking out relationships with others who are really “your people,” says Lim. She often encourages her young patients to set a goal of improving just one relationship—whether it’s their sibling, parent, or only friend from school. “It’s about building the bond between you and that person,” says Lim. Reducing loneliness “is not just having people around you, but [having] a meaningful relationship with them.”

It’s also important to remember that loneliness is part of being human, “a biological drive…that motivates us to reconnect socially,” and not something to be ashamed about, says Holt-Lunstad. In the short term, she suggests getting busy to distract yourself and enrich your life—like getting out in nature, taking up a creative hobby, or meditating. She also emphasizes nurturing existing relationships, including with people you might overlook. In a study she conducted during the pandemic, Holt-Lunstad found that people became less lonely after doing small acts of kindness for their neighbor, such as walking their dog or taking out their trash.

“For someone who might be feeling lonely, they don’t need to wait for someone else to contact them or do nice things for them— they can take the initiative,” says Holt-Lunstad. “One of the ways that we can help ourselves is to help others.”