Are Anna Kendrick and Bill Hader Still Together? Dating Update 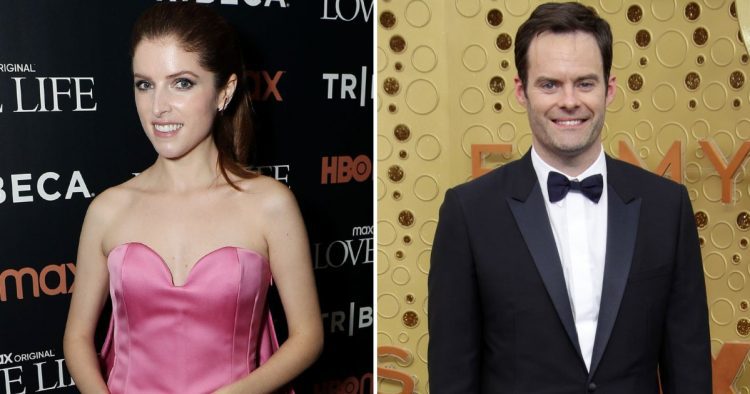 A normal couple! Anna Kendrick and boyfriend Bill Hader’s relationship has been out of the public eye but the two are still happily together. The Saturday Night Live star and Pitch Perfect actress both have a good sense of humor, which is what made the two connect with one another, while also sharing the same interests.

Keeping their relationship out of the spotlight, a source told Us Weekly that the pair likes to do normal things together. “They hike, watch movies, hang with friends and enjoy weekend trips away,” the insider explained.

Bill, 43, recently told The Hollywood Reporter that he chooses not to discuss his relationship with Anna, 36, to protect his three daughters, Hannah, 12, Harper, 9, and Hayley, 7, whom he shares with ex-wife Maggie Carey. “They just want me to be their dad,” the Barry star said when discussing the privacy of his daughters.

Anna Kendrick and Bill Hader keep quiet about their relationship.

People reported in January 2022 that the pair have been “quietly dating” for over a year.

“They are both very private people, and with the pandemic it was easy to keep it quiet,” the source told People. “They’re both hysterical so they must keep each other laughing all of the time. She’s really, really happy.”

Besides his recent comment to The Hollywood Reporter about keeping their relationship private, Bill and the Twilight actress have yet to publicly comment about their romance.

Anna Kendrick and Bill Hader were costars before dating.

Although they have a romantic relationship in real life, the two played siblings in the 2019 Disney+ Christmas movie Noelle. When discussing the film, Bill gushed over his then costar’s work ethic.

“She’s a great performer. She’s just such a strong performer and that’s always great because it raises your game,” he said.

Before they started dating, the Maine native grew fond of Bill’s three daughters when they came to visit the set of their film Noelle.

“Bill Hader’s kids came to visit the set, and that was so magical to see them, like, skate everywhere. I was just like, ‘This is … it’s magic,’ Anna gushed while promoting the holiday film on Live with Kelly and Ryan in 2019.

Already being acquainted with his children, a source told US Weekly that the Oscar nominee has already “bonded” with the girls.

Bill Hader was once married.

The Trainwreck actor was married to film director Maggie Carey from 2006 to 2018 and welcomed their three children during that time.

Bill and Maggie, 47, still healthily coparent their children and the Emmy winner opened up about their dynamic during the coronavirus pandemic. “Maggie and I were just trying to keep them calm. And then, weirdly, it was the other way around. They would really keep us calm,” the Noelle star told The Hollywood Reporter.

Much like her current partner, Anna keeps her love life out of the public eye. The Love Life star dated director Edgar Wright from 2009 to 2013 after meeting on the set of Scott Pilgrim vs. The World.

During a 2020 interview with the Sydney Morning Herald, she revealed that she was “happy that I’m clearer now about what I will accept from people in my life.” Then along came Bill!