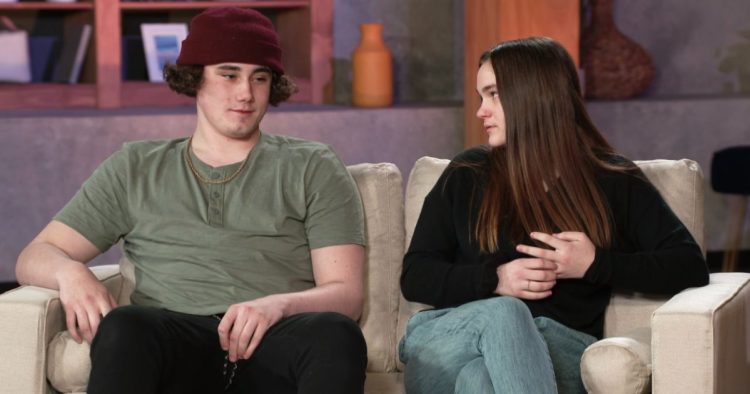 Is Unexpected star Kylen Smith pregnant again? The TLC newcomer’s boyfriend, Jason Korpi, sparked rumors that they were expecting baby No. 2 together after he posted what appeared to be a sonogram on Thursday, June 16.

“So excited to FINALLY share our BIG NEWS 🤰❤️ ,” Jason, 19, captioned the ultrasound photo via Instagram and directed fans to click a link in his bio. The image featured Kylen’s name and was dated as June 14. Kylen, 18, later shared the same photo, caption and link to her Instagram page.

However, when fans clicked the link, they quickly learned that Jason and Kylen were not expecting and the baby announcement was for 16 and Pregnant season 3 alum, Izabella Tovar, who announced her third pregnancy in March 2021. The former MTV star gave birth to her third child that September.

While Kylen and Jason both deactivated comments on their posts, their activity was the first time they updated their Instagram pages since their explosive appearance on the Unexpected season 5 tell-all.

Kylen and Jason made their debut on the TLC series in March. The show follows teenage girls on their pregnancy journeys as they adjust to motherhood, new family dynamics and major tension with the father of their children and Kylen and Jason quickly became one of the most controversial couples of the season.

During their introduction, Jason described himself as “f—boy,” which he defined to producers as “a person who goes from girl to girl or has multiple girls and just gets as many as you can — it’s like a game.” He also referred to himself as a “professional raw-dogger.”

Throughout their story line, viewers watched as Jason appeared to be very controlling of Kylen throughout her pregnancy. After moving in with Jason’s family, Kylen became estranged from her parents and Jason was adamant that Kylen follow his plan of having a drug-free home birth. But when it came time for Kylen to give birth to their son, Xavier, in August 2021, she ended up having to go to a nearby hospital.

The couple got into a big fight when Kylen said she wanted to get an epidural, which is an anesthetic used in during labor and delivery to help ease the pain of childbirth. Jason didn’t want Kylen to use “drugs” because he feared that they would also enter their baby’s system. During their argument, hospital staff called security, who later escorted Jason out of the building.

When they appeared on the tell-all, the rest of their costars expressed outrage and concern for Kylen after watching her journey with Jason play out on season 5. After Tyra Boisseau, Tiarra Boisseau, Taylor Williams, Lilly Bennett, Jenna Ronan and Emersyn Potter all called Jason out for his treatment of Kylen on part 1 of the tell-all, the couple stormed off the stage.

“I’m like holy s—t, she’s like being mistreated and, like, that’s scary for her,” Lilly, 21, said as they walked off. “She’s so brainwashed and it’s so sad.”