EXCLUSIVE:  Following the fatal June 16 crash that claimed the lives of two actors and injured six others from the cast and crew of Netflix’s The Chosen One, survivor Yeray Albelda spoke to Deadline about the loss of his close friends Raymundo Garduño Cruz and Juan Francisco González Aguilar (Known professionally as Paco Mufote).

The trio was hired to play miners in the Redrum-produced series. Albelda and González began work on June 2 and were rooming together; Garduño had an earlier start date.

‘Iron Chef’: Alton Brown on Why He Departed Food Network for Netflix

Albelda, Garduño, González, and the rest of the cast and crew involved in the accident were headed to the Loreto International Airport to catch flights to their respective home cities—Albelda, Garduño, and Gonzalez were en route to Tijuana—for a week and a half break from filming. They were due back on set following the break to work until July 16.

Eight people total from The Chosen One were riding in the van: Albelda, Garduño, González, two female stunt coordinators, a young actor and his guardian, and the driver; only the driver and the passenger sitting next to him were wearing seatbelts. The driver was new and had only arrived one day prior to the set as a replacement for a different driver who needed a break as demand for transportation was high.

Albelda suffered head trauma in the accident and is unable to remember the tragic ride. He was under observation due to the amnesia and has undergone multiple scans all of which have come back normal. Physically he is nursing a fractured clavicle and the scapula but none of his injuries are life-threatening. Doctors have ordered him to rest for 6-8 weeks.

“I remember turning in my hotel room key that morning and going out to the street to buy a burrito since the van was picking us up at 7 a.m. and we hadn’t had time to have breakfast. After that, I remember waking up in the ambulance,” he said.

“Inside the van, the setup was three rows for passengers behind the driver and passenger seats in the front. I normally sat in the second row, and believe that’s where I was sitting when the accident happened. It’s my understanding that Paco and Ray were sitting in different rows, at the end closest to the van’s sliding door. I have been told the van spun around many times and the sliding door flew open. My guess based on what I’ve been told is that [without seatbelts], Paco and Ray were ejected.”

Albelda does not fault Netflix or Redrum for the accident and says both have gone above and beyond to support him in the aftermath.

“They have done the right thing and have been just,” he said. “This wasn’t like a ticking time bomb situation where at any moment something was going to go wrong—no. There’s no way anyone could’ve imagined this would happen. Trust me, I just lost two very good friends who I’ve known for many years. If I felt anyone was responsible, I would speak up to bring their families justice.”

Albelda has worked in approximately five major productions, including The Walking Dead, and he says the vans used in all of them appeared to be in comparable condition. He describes the vans used on The Chosen One as “not brand new made in 2022 but definitely not old.” He says there was nothing of note that caused him to worry about the van they rode in to the airport but he also notes he is not a mechanic and isn’t aware of any mechanical issues.

“I recently had to visit the location where the van from the accident is being stored to claim any property I might have left behind. Seeing it again and how it was destroyed had a huge impact on me,” Albelda said. “Some people have suggested the tires may have been subpar so I made sure to specifically look at the condition of all four and those people are incorrect. The wheels were in fact in good condition.”

He added, “One thing I will say is that no one encouraged those sitting in the back of the van to use seatbelts. Only the driver and the front passenger consistently used seatbelts. To be clear, there were seatbelts in the vans, but rarely did anyone use them. I will speak for myself in saying I never did. I always felt safe while in the van and I couldn’t have imagined that a terrible accident like this could happen.”

Work on The Chosen One resumed on Monday, a decision Albelda supports as a tribute to his friends. Due to his physical and emotional trauma, he has opted to exit the series. The production is covering his medical bills and will continue to pay his salary as if he had worked through the end, according to Albelda.

Albelda has heard there have been allegations of poor working conditions and shady business practices behind the scenes of The Chosen One. An outspoken critic has been novelist Rick Zazueta, who claims to have insight into the production thanks to sources from within.

Albelda says Zazueta recently sent him a friend request on Facebook which he accepted but clarifies that he has never met him or known of him prior to the accident.

“I did read his accusations and found them very interesting,” Albelda shared. “I have never spoken to him and I am unaware of who his sources are. I can only speak to my experience as someone who has worked on multiple productions of this size. Yes, they’re exhausting, and we work long hours. I don’t know if my experience is different because I’m used to working 16-hour days, but everything on The Chosen One was on par with my experience on say a show like The Walking Dead. It was business as usual for me. My biggest complaint is that sometimes we would get picked up to be on set at 9 am but we wouldn’t shoot until like 2 p.m. but that’s par for the course in this business.”

He continued, “Shooting schedules were often in flux because if someone had to isolate due to Covid infection, we would have to pivot to something else. My complaints are small. I never felt like my life was at risk or that I was being taken advantage of. There was never a moment when I wanted to complain or leave the production. I was paid what I was promised and when it was promised. I know we make less than American actors do but I was never lied to about what I was going to be paid. I was never abused or exploited in any way or treated unfairly. I’m not saying this isn’t someone else’s experience but it wasn’t for me. It wasn’t anything I witnessed firsthand either.”

Albelda and other friends of Garduño and González gathered Tuesday afternoon for a memorial service honoring the actors. It was an emotional gathering that celebrated two honorable men who leave behind family, friends, and admirers after a lifetime of giving of themselves and their art.

“Both are longtime friends from the theater with who I’ve been through a lot—both good times and bad. We’ve been on tour together and we all know one another’s families,” Albelda said. “I’ve known Paco for about 18 years and Ray for around 7 years. Ray was the rebellious one. I never posted photos on set because we signed NDAs that prevent spoilers from getting out. But Ray, as the rebel, loved being on set and he posted a few photos anyway. He was very proud to be working on this production. He was very much the life of the party. When we had time off, he would hit the local bars or listen to music by the pool.”

“I remember Ray and I first met in 2015, we collaborated on three projects through his theater company, Teatro Inmigrante,” Albelda continued. “Through his company, he worked a lot with children, and I remember it was very important to him that the young actors be treated as professionals. He worked with very talented actors who were smart; he didn’t want people to underestimate what they could accomplish. He also tackled social justice issues in his productions. We were talking about his character at his memorial yesterday, he had a very strong personality that didn’t rub everyone the right way. But it was because of his sternness that he was able to help enact change and stand up for what was important. He was also very generous and wanted everyone to succeed. You always knew where you stood with him.”

“Paco and I met at the first theater audition I ever had. I want everyone to know that his stage name Mufote represents his three biggest passions: music, photography, and theater. What stood out about Paco the most was his generosity, his empathy, and how humble he was. He treated everyone equally from the extras to the star of whatever project he was involved in. While we were shooting in Santa Rosalia, he hated being stuck inside the hotel. He would go out in the community and start random conversations with the locals. He visited the museums and learned the history of the area, which he would then teach us all about when we caught up later. Paco yearned for knowledge. He also was good at lending an ear or a shoulder.” 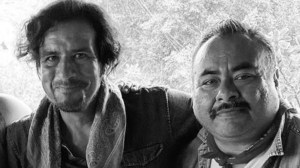 He added, “That photo you saw on Ray’s Instagram from Paco’s birthday represents how Paco wanted to celebrate another year of life. A simple gathering among friends, he didn’t want to party or get drunk. I remember one instance when we were shooting a scene in the desert, and he gave up his umbrella to someone else who needed it more. Both are leaving a huge hole in the hearts of those that knew them.”

This tragedy hasn’t dissuaded Albelda from continuing to work as an actor, in fact, it’s fueled him to work even harder knowing two great thespians he admired no longer have that opportunity.

“Their deaths are tragic but I told their families to find comfort in the fact that they were doing what they loved the most. They were living their dream. I find comfort in that Paco and Ray died that way and not from an incurable disease or something worse. I was given the gift of living another day and I don’t take that lightly. I want to continue acting and honor Paco and Ray by sharing everything that they taught me. I will share my dream with them for the rest of my life,” he said.