Brad Pitt bared some skin during one of his many Bullet Train interviews. When Brad’s shirtless moment in Fight Club was shown during his interview with co-stars Aaron Taylor-Johnson and Brian Tyree Henry on The Untitled Josh Horowitz Show, Brad rolled his eyes and said, “I’m going to do this interview shirtless if this goes on much longer.”

The 58-year-old unzipped his jacket and began to lift the T-shirt he was wearing underneath off. His Bullet Train co-star Aaron put his hand across Brad to try and stop him from taking his shirt off. While we didn’t get a full shirtless moment in this interview, we did get a peek!

For his latest Bullet Train interview, Brad donned a bright yellow tracksuit. Throughout his Bullet Train promotional tour, Brad has upped his style game. At the Los Angeles premiere, he rocked a neon green suit. For the Berlin premiere, he hit the red carpet in a skirt. He attended the movie’s photocalls in a peach two-piece ensemble and a light pink tracksuit.

Brad Pitt’s Hunkiest Photos Since Angelina Jolie Split: See The Heartthrob On Set, On The Red Carpet & Beyond

The Oscar winner has had his fair share of shirtless scenes over the years. In addition to Fight Club, Brad also went shirtless for steamy scenes in Once Upon A Time… In Hollywood, Troy, and Thelma & Louise. He’s been pretty easy on the eyes since the start of his career!

The movie star has been in the midst of a custody battle with ex-wife Angelina Jolie since their 2016 spilt, and he’s been very private about his personal life ever since. However, HollywoodLife learned EXCLUSIVELY that Brad is “casually dating” at the moment. 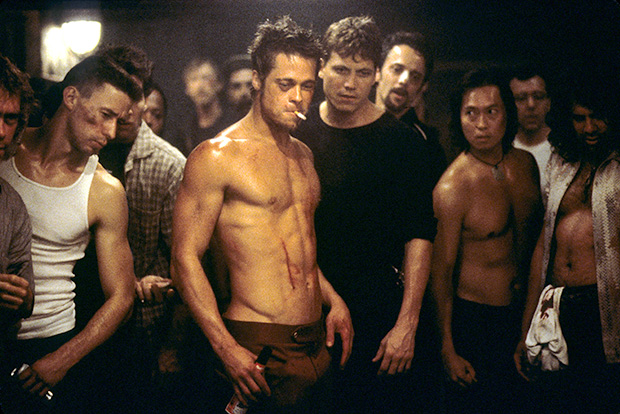 “Friends have set him up, that’s really the only way he can meet anyone because he’s not going on dating sites or hitting the bar scene,” our source revealed. “Nothing serious has come from it yet, but he seems a lot more open to the idea of having someone special in his life again, which is a big step.”