Marlon Wayans Was Paid $100,000 For Batman Returns Movie & Still Gets Residual Checks, Despite His Character Being Axed From The Film

Marlon Wayans Was Paid $100,000 For Batman Returns Movie & Still Gets Residual Checks, Despite His Character Being Axed From The Film

A cancelled role has Marlon Wayans cashing in big time!

The actor revealed over a series of interviews that he was originally set to star as Robin in the Tim Burton “Batman” franchise. However after directorial changes, the character was cut from the film. Resulting in Marlon never starring in the movie, but receiving pay and royalties from the original deal.

Multi-talented entertainer Marlon Wayans almost starred in one of the biggest films of the 90’s. During press interviews back in 2009, the actor revealed he was cast and paid for the role of Robin in the “Batman Returns” movie. He stated:

I was actually supposed to play Robin, in Batman Returns, about 15 years ago. But there was too many characters. I was cast, I was paid and everything. I still get residual checks.” 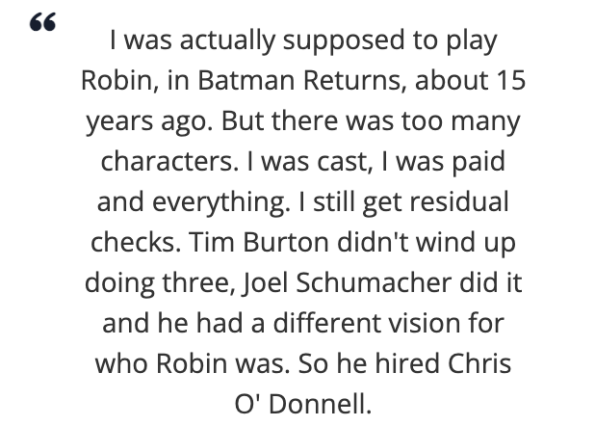 If you recall, Tim Burton’s version of the comic book movie starring Michael Keaton filmed two movies. A third installment reportedly was supposed to see Michelle Pfeiffer reprise her role as Catwoman, and introduce Batman’s sidekick Robin into the series. The role Marlon was contracted to portray. However, once Tom was replaced by director Joel Schumer, an alternate script was greenlit. Giving life to the “batman Forever” film starring Val Kilmer, Tommy Lee Jones, and Jim Carrey.

Since he was already signed on for the part of Robin, however, Marlon was paid and continues to be paid from royalties. The contract reportedly has cashed in $100,000 over time.

Could you see Marlon playing Robin during that time?? Give us your thoughts in the comments!