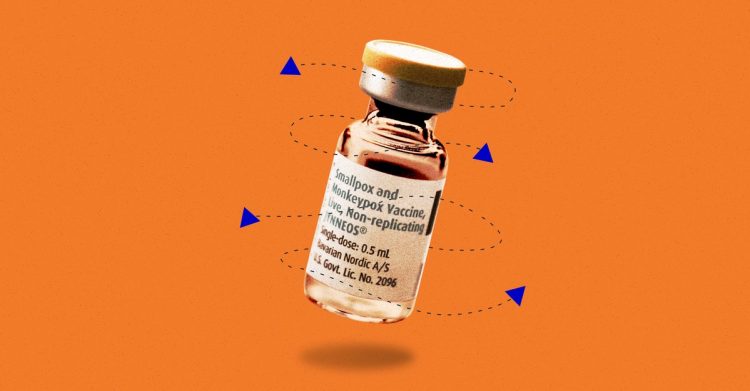 Once again, the United States is messing up its approach to vaccines. Three months into its monkeypox outbreak, just 620,000 doses of the two-injection Jynneos shot—the nation’s current best immune defense against the virus—have been shipped to states, not nearly enough to immunize the 1.6 million to 1.7 million Americans that the CDC considers at highest risk. The next deliveries from the manufacturer aren’t slated until September at the earliest. For now, we’re stuck with the stocks we’ve got.

Which is why the feds have turned to Inoculation Plan B: splitting Jynneos doses into five, and poking them into the skin, rather than into the layer of fat beneath. The FDA issued an emergency-use authorization for the strategy yesterday afternoon.

What It Costs to Get an Abortion Now

This dose-sparing tactic will allow far more people to sign up for doses before summer’s end; if successful, it could help contain the outbreak in the U.S., which currently accounts for nearly a third of the world’s documented monkeypox cases. But this decision is based on scant data, and the degree of protection offered by in-skin shots is no guarantee. The FDA is now playing a high-stakes game with the health and trust of people most vulnerable to monkeypox—an already marginalized population. Call it a bold decision; call it a risky gamble: It may be the best option the country currently has, but one the U.S. could have avoided had it marshaled a stronger response earlier on.

Read: America should have been able to handle monkeypox

Little is known about how Jynneos performs against monkeypox even in its prescribed dosing regimen, the so-called subcutaneous route; the new method, intradermal injection, is a murkier proposition still. “We are in a very data-thin zone,” says Jeanne Marrazzo, an infectious-disease physician at the University of Alabama at Birmingham.

The shot was approved for use against smallpox and monkeypox in 2019. But to date, researchers don’t have a strong sense of how well it guards against disease or infection or how long protection lasts. Although scientists know that two doses of Jynneos can elicit similar numbers of antibodies as older poxvirus vaccines, no estimates of the vaccine’s true efficacy, from large-scale clinical trials, exist; a human study in the Congo hasn’t yet reported results. And though firmer data have shown that the vaccine keeps lab monkeys from getting seriously sick, “I don’t necessarily trust making the clinical decisions” based just on that, says Mark Slifka, a vaccinologist at Oregon Health & Science University. It’s not even clear if Jynneos can stop someone from transmitting the virus, especially now that many cases seem to be arising via skin-to-skin contact during sex, an understudied form of spread.

The emergency switch to lower-dose intradermal administration has been tested with other vaccines, among them the shots that guard against yellow fever and influenza. Skin is rife with specialized defensive cells that can snatch up bits of vaccines and ferry them to other immune fighters, “so you can use a smaller dose and get similar responses” to a full-size subcutaneous shot, says Jacinda Abdul-Mutakabbir, a pharmacist at Loma Linda University, in California.

One lone study from 2015 suggests that this logic should hold for Jynneos—at least among the trial’s participants, healthy adults who were mostly young and white. In that group, the subcutaneous and intradermal shots were “quite comparable” at rousing antibodies in the body, which is “very encouraging,” says Kathryn Edwards, a vaccinologist at Vanderbilt University who helped conduct the study. But that’s not the same as bona fide protection against the virus. And what happened in that single study won’t necessarily play out in the real world, especially in the context of the current outbreak, which differs from its predecessors in demographic and size. “I do think these data need to be confirmed,” Edwards told me. Most of the cases so far have been in men who have sex with men, many of them living with HIV—a community whose immune systems don’t look the same as the population at large, and in whom vaccines may not take as well, or for as long, Slifka told me. And yet the FDA has charged ahead “completely based on” that 2015 study, says Alexandra Yonts, a pediatric infectious-disease physician at Children’s National Hospital. In a statement, the agency explained that it had “determined that the known and potential benefits of Jynneos outweigh the known and potential risks” for green-lighting the intradermal route.

Delivering vaccines into skin leaves little room for error. The tuberculosis skin test is also administered intradermally; Marrazzo has seen “dozens of those messed up.” People have bled or been bruised. Needles have gone too deep—a mistake that can slash effectiveness—or too shallow, letting liquid ooze back out. Intradermal injections are an uncommon and difficult procedure, requiring additional training and specialized needles. “There is going to be some degree of error,” says Kenneth Cruz, a community-health worker in New York. “People are going to wonder if they’re protected, and it’s going to be difficult to check.”

Already, health-care providers are having “issues staffing vaccination clinics for subcutaneous injections,” says Boghuma Kabisen Titanji, an infectious-disease physician at Emory University; the switch to intradermal will exacerbate those shortages and could raise further vaccination barriers for people without reliable health-care access. Intradermal shots can also come with more irksome side effects, as the 2015 study suggested, including redness and swelling at the injection site that can be “pretty robust and severe,” Marrazzo told me. People who get their first doses might not come back for more, defeating the point.

Dose-splitting is still “a much better way to go,” Yonts told me, than skipping or seriously delaying second doses—which has already happened in cities such as New York; Washington, D.C.; and San Francisco—in an effort to conserve supplies. Even elsewhere, second appointments are very hard to get. “I do not know anyone who’s gotten the second dose,” says Nick Diamond, one of the investigators behind RESPND-MI, an LGBTQ-led survey of monkeypox symptoms and networks. Which isn’t great: After just one shot, antibody levels “barely budge,” Yonts said, leaving people vulnerable until two weeks after the second injection is complete. (Another vaccine, ACAM2000, is available but can cause serious side effects, and isn’t recommended for people who are immunocompromised, including those with HIV.)

With no other good choices on the table, dose-splitting is the only road to take. “I don’t really see another viable option,” Marrazzo told me. That doesn’t erase the fact that the nation squandered its chance with Inoculation Plan A: leveraging its considerable resources to deploy the tests, treatments, and vaccines to contain the outbreak early on, and keep subcutaneous shots in contention. Now, with about 9,500 recorded infections among Americans nationwide—a definite undercount—the door to that has slammed shut. Sticking with the strategy of two full subcutaneous doses for all was projected to leave us with “no vaccine by October,” Marrazzo said.

Plan B, though, could have real costs, depressing vaccine demand and trust. Already, “we haven’t been able to answer questions about the level of protection,” Diamond told me, “which makes it really hard for people to make decisions around risk.” The best Abdul-Mutakabbir has been able to tell her patients is that “receiving this vaccine will likely protect you more than if you had not,” she said. Which doesn’t do much to “allay fears and worries,” Cruz told me, especially after more than a year of confusing and conflicting messages about COVID vaccination.

Read: What should worry most Americans about our monkeypox response

Joseph Osmundson, a microbiologist at NYU and a RESPND-MI investigator, told me that he thinks the Biden administration did not properly consult members of vulnerable communities before plowing ahead with dose-splitting. And he worries that disparities could arise if subcutaneous shots end up outperforming intradermal ones: People who had the socioeconomic privilege to find and access appointments early will have gotten the primo doses, while those already at higher risk skate by on a smaller serving of immunity, exacerbating the inequities the outbreak has already begun to exploit. The numbers alone could leave a bad taste: “If I were standing in line to get a fifth of a vaccine,” Diamond told me, “I would wonder why my health is valued less.”

Dose-splitting is a stopgap—“not a solution” that’s sustainable, says Luciana Borio, a former acting chief scientist at the FDA. The monkeypox outbreak could stretch on for many months, or become endemic in animals. Eventually, boosts may be necessary; ACAM2000 may yet have a larger role to play. The U.S. will need clinical trials to understand which dosing strategies actually work best, and in whom—and the populations most affected, especially men who have sex with men, should be involved in those decisions along the way. Officials must be “transparent about the gaps that exist,” Abdul-Mutakabbir told me, “and be intentional about working to fill those gaps.”

Still, as news of the dose-splitting decision continues to percolate out into the population, an inadvertent message may already be getting sent: “The government is placing the onus on community members to protect themselves,” Cruz said. “But we’re in this position because the government failed.” Should the administration’s big bet on dose-splitting not pay off, Osmundson said, for those who have so far borne the outbreak’s brunt, “that will be the nail in the coffin of any public trust.”