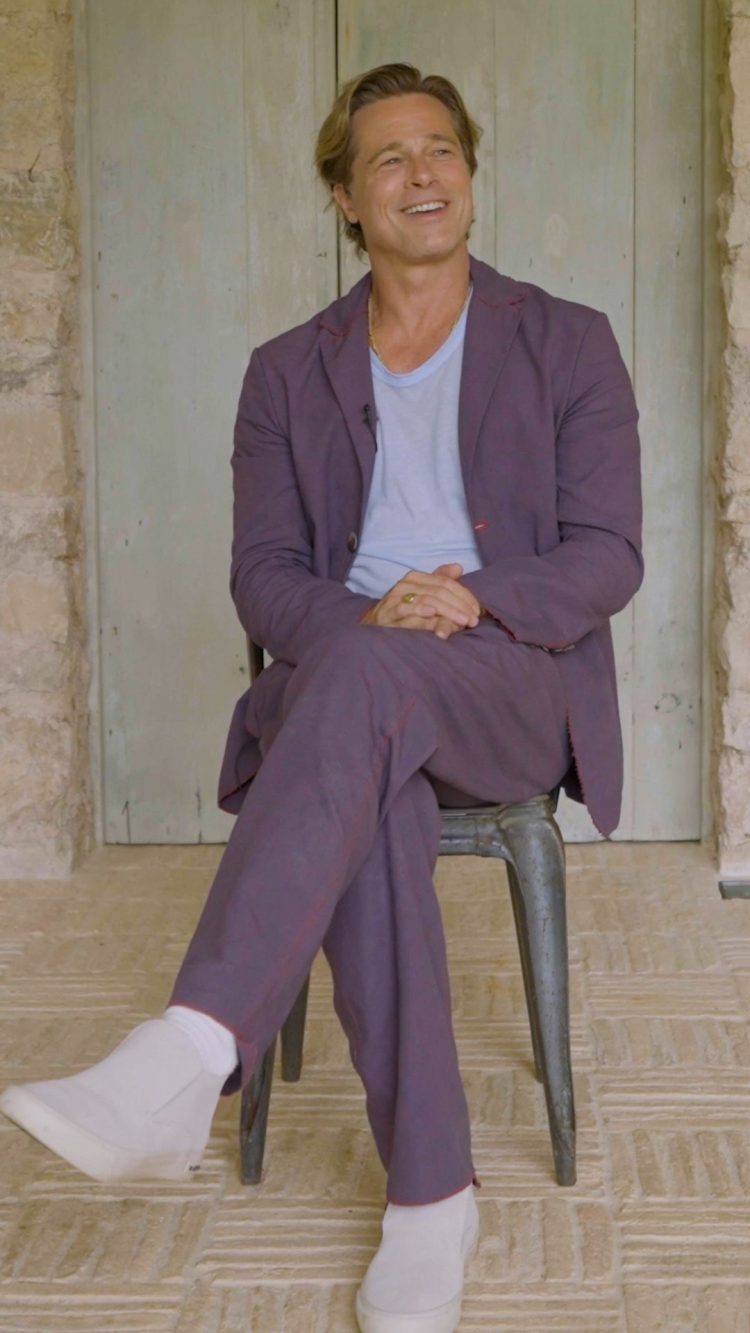 Here, Pitt reveals his “little, simple regimen,” how Gwyneth Paltrow influenced his early skincare habits, and why self-love just may be the best secret to ageing well.

How did the Le Domaine project come about?

Brad Pitt: We had been talking about it for so long I don’t remember now how it originally started. I remember reading about the health properties of grape skins as something we wanted to investigate. But the initial idea, right from the beginning, comes back to this place. It’s just steeped in creativity and it’s so fertile. We make olive oil, truffles and honey here. Reinforced concrete began here. Reinforced concrete! That’s insane! In the 1840s Joseph-Louis Lambot invented ferro-cement, a precursor to reinforced concrete, and made a concrete boat that was eventually pulled out of the pond here and now resides in a museum in Brignoles. We had some pillars – test pillars – up in the courtyard. He went on to make the first two buildings in reinforced concrete, and now of course everything is built that way. It’s pretty extraordinary.

The Glow Guide: How To Keep Your Skin Bright Year-Round

Brad Pitt during his interview at Château Miraval in Provence.

And was skincare meant to be a part of this creativity? Had you been secretly thinking all this time, “I must have a skincare brand?“

No, and truthfully we wouldn’t have done it unless we felt there was something valid here, something original, something that worked. I get sent stuff all the time and… ugh. It’s just all the same for me. But this last year we have been testing Le Domaine and I was really surprised by the results, and that for me, made it worth going forward.

Have you always had a good skincare routine?

I was so sure you were going to say yes, because one imagines you would be well looked-after…

Well, when I’m looked after, I do [have a good skincare routine]. I just want to keep it simple, you know what I mean? That said, I’m actually thorough now. I’ve been whipped into shape by my dear make-up artist friend – we started together 30 years ago – Jean Black. She is pretty special. So whenever we’re on a film she keeps me healthy, and then she’s like, “try this,” and, “try that.”

You look like you have great skin anyway. I can’t imagine it takes much!

No, not really, I don’t, but now… I mean I have my little, simple regimen.

I don’t even know what that is.

Rarely. I get antsy.

Did you ever imagine yourself as a beauty baron?

[Laughs]. I’m not sure what a beauty baron is…

It’s like if you were to achieve Estée Lauder-level success.

If Le Domaine is successful, do we get baron status? Yeah, no, I didn’t [imagine that]. Landing here – at Château Miraval – opened up a lot of ideas that I wouldn’t have normally considered. And a big part of it is sustainability, this idea of zero waste is something that is really important to this area and important to me. But listen, when we first got here, I mean, I never thought about having a winery either! I just wanted a beautiful base in this area and it happened to have a winery. And it happened to be hemorrhaging tonnes of money. So we had to go to work. And then we went out on a search and found Marc [Perrin] and his family.

A clever idea. You majored in journalism, I’ve read…

Do you wish you had followed that career path?

[Laughs]. I think I’m pretty happy with where things landed! I wouldn’t have objected to that, but I’m feeling alright about my day job.

How do you feel about film star-fronted business enterprises in general?

When I started out it seemed shameful to do a commercial, for some reason. You were called a sell-out. I really think the hip-hop guys changed all of that. They made it okay — even cool — to spread your wings a bit, to try some other things. And now it’s really exciting that you can, you know, explore other corners [of your creativity] like the old Renaissance artists in a way. And I love what Gwyneth’s done [with Goop]. She is still a really dear friend, and she has built this empire. She has always had that in her as a curator, and it’s been a lovely creative outlet for her. In fact, come to think about it, she was probably the first one who got me to even wash my face twice a day… maybe.

What pressures have you felt personally around ageing in the film business?

I don’t want to be running from ageing. It’s a concept we can’t escape, and I would like to see our culture embracing it a bit more, talking about it in those terms. Something we discussed [in founding Le Domaine] was this headline of “anti-ageing.” It’s ridiculous. It’s a fairytale. But what is real is treating your skin in a healthy manner. And it’s something I’ve learnt to do for my business, but it kinda makes you feel better. I grew up with a country mentality, kind of you know, Dial Soap once a day and then move on. And I think that we’re learning that if we love ourselves, if we treat ourselves a little better, then there are long lasting benefits to that. So just age healthy, age in a healthy manner.

Speaking of, I watched Benjamin Button last night. Was it strange to see yourself looking older in that role?

No, no, it wasn’t at all, I was kind of fascinated by it, really. And by the way? All those prosthetics, six hours of prosthetics? Tore up my skin. They destroyed my skin!

How and why is it important to you that Le Domaine’s approach is genderless?

Again, I don’t know if it’s just that I believe in being all-inclusive as much as possible? Or maybe it’s about us guys needing help from others in understanding how we can treat our skin better? I mean, I probably got more from my female partners in the past. We kept the smell very neutral, very fresh, and very, very subtle. I mean, I’m the kind of person who will change hotel rooms if I can smell the cologne of the last person who stayed there! It’s too much! It’s too strong! Keep it subtle. Let people come to you. Don’t force it on others. That’s my feeling (laughs). For smells, I mean. I stand by that for smells!

Do you have any special memories of Miraval?

This past spring was special. We had a good five or six weeks out here. The stories you hear about Provence in the spring, why people come here. Well, it’s real. And I can’t quite describe it, other than the freshness in the air, the light, the… I don’t know, it’s just a real feeling of peace and harmony and the nights are so soothing. In summer you get the symphony of frogs, they lull you to sleep. I have a lot of artist friends from different disciplines, and they were here this spring, we were having a laugh. One was working on his music [at Studio Miraval], one was painting, one was designing a clothing line, and so on and so forth. They’d go off to their respective corners to work on their respective things, and then we’d come back here to cross-pollinate over a meal, or a game of petanques, in the spot we’re sitting in now. Making an artist community has always been the idea here, and it’s really nice to see that happen.

The older I get the more I think about quality of life, and time expenditure, and I sure would like to point it more in this direction. I think after lockdown it seemed to be on a lot of people’s minds, like, how are we spending our time, why are we grinding so much, what are we dedicating our lives to? And I think that family and friends at the end of the day is all that matters.