Despite starring in the recently premiered House of the Dragon, one of HBO’s most-watched show of all time, Fabien Frankel claims his life isn’t too different these days—apart from the odd comment. “I played a football match yesterday, and a bunch of lads I hadn’t seen in a really long time were like, ‘I can’t believe I had to watch you have sex on TV,” he tells W over the phone, laughing. “But day-to-day, my life, actually, is pretty much more or less the same.”

That’s a surprising detail, considering Frankel’s turn as Ser Criston Cole on the Game of Thrones prequel has garnered quite a lot of attention. Yes, there’s the sex scene in episode four that has his football mates chatting, but more recently, it was Cole’s actions at the end of episode five that placed him in the spotlight. At first, he’s a fairly inconsequential character, a quiet confidant to the young Princess Rhaenyra. But Cole is eventually pushed to his breaking point, caught up in the wheeling and dealing of King’s Landing until he snaps and the otherwise joyous occasion of a wedding ends in bloodshed at Cole’s hand. Some may have been surprised by this sudden change in character, but Frankel suggests we should have seen it coming.

Frankel as Ser Criston in House of the Dragon episode one.

“If you’re predisposed to violence, whether you’ve managed to find a way to regulate that feeling within yourself or not, circumstances are always going to bring out those parts of your soul,” he explains. Cole is a soldier, Frankel reminds us: he fought in a war, competed in tournaments. In fact, when we first meet him, he’s beating down Matt Smith’s Daemon Targaryen. “He’s by no means a pacifist, as very few people in this world are.”

It’s possible Cole’s sudden change in temperament came as such a surprise to viewers because, in reality, we don’t know much about this common-born knight. While many of the characters in Dragon are steeped in history, Frankel had a bit more wiggle room when it came to taking on the role of Cole. Yes, the knight is featured in George R.R. Martin’s Fire & Blood, the novel upon which the show is based, but Fabien says there wasn’t too much there to work with. “[The book] will be like, ‘He was a knight with black hair and green eyes,’ but it’s not telling you how he feels at each moment.” And while Thrones fans—even those who didn’t read the books—have been familiar with the Targaryens and Hightowers for over a decade now, Cole is more of an unknown entity. “I kind of felt like I was given the lyrics, and then I got to write the melody,” Frankel adds.

Of course, when Frankel first embarked on the audition process, it wasn’t Ser Criston Cole he was tasked to embody, but Ser Clint, “an unknown character in an unknown show that HBO was may-or-may-not making,” he recalls. After he sent in a self-tape and got four months of silence in response, Frankel assumed he didn’t get the role. “I heard it wasn’t going my way because they wanted someone stronger, and bigger than me,” he says. “Like a more Jason Momoa vibe.” Following his initial audition, he got word that this anonymous project was actually the Thrones prequel series, making the assumed rejection sting all the more. As an actor attending drama school in London during Thrones’s initial run, the HBO show was all anyone talked about.

“Everyone would be like, ‘Imagine if you could be in a show like Game of Thrones, how crazy that would be?’” Frankel says, citing all the young, British actors like Emilia Clarke, Richard Madden, and Kit Harrington who were unknown when cast on the original series, and have since become household names.

Then, Frankel got the call “out of nowhere” as he describes it, and suddenly that sadness turned to pressure. “I’d never auditioned so little for a job that was so big,” he says. “I couldn’t understand what was going on in their heads. They felt I was so right for this part after just one self tape. So, the pressure came from being like, ‘Fuck, I hope they don’t feel like they’ve made a mistake.’”

Frankel with Emily Carey on Dragon. 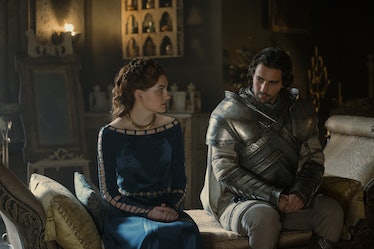 Years later—following months of production, a press tour, and the premiere of the first half of the series—it seems that self-inflicted pressure is just now subsiding, and Frankel can finally celebrate his success. “At first, there was a weird numbness,” Frankel says about watching himself on Dragon as the responses play out in real time. “Now, five episodes in, I can feel that sense of pride, having seen all the hard work that went into it and watching the show objectively.”

Frankel is quick to point out that the success of the show is thanks, in large part, to its cast—filled with just as many English heavy hitters as new faces. And while his friends may make jokes about his sex scenes, they’re also the first to comment on the grandeur of Frankel’s new coworkers. “All my mates, who are actors, were like, ‘You’re going to do a scene with Paddy Considine and Rhys Ifans,” he says with a laugh. “Those are the actors we grew up on.” Frankel was raised as a cinephile (his mother used to take him to the theater once a week), and it’s clear the culture-focused upbringing had an effect on him. While some up-and-coming actors of Frankel’s ilk would hope a MCU or DC contract might follow his run on Dragon, Frankel has other ideas.