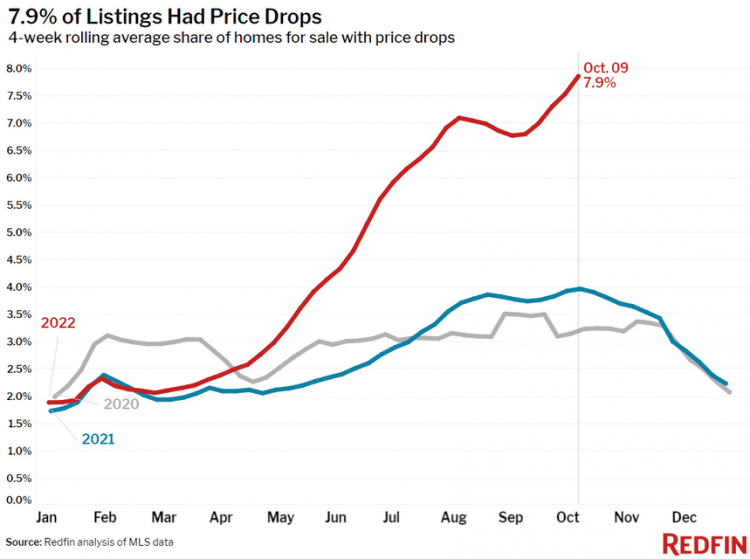 Here’s a chart that speaks a thousand words about the state of the real-estate market right now.

The chart above, part of a new report by real-estate brokerage Redfin
RDFN,
-7.03%
on the property market, reveals how home sellers are adjusting to the new normal of 7% mortgage rates.

The chart says that 7.9% of homes for sale on the market each week had their prices slashed — and that’s a record high.

That’s compared to just 4% of homes having their prices reduced each week over the same period a year ago.

Redfin’s data goes back to 2015. The company averaged out the share of listings which saw a price cut over four weeks, to smoothen out any outliers.

Taylor Marr, deputy chief economist at Redfin, added that looking over a bigger time period, i.e. a month, the company’s data shows that a quarter of homes right now are dropping prices.

“We have never been this high,” Marr told MarketWatch in an interview.

Unlike buyers, who are much more sensitive to rising mortgage rates, “sellers are just slow to react to the changes in demand… they set prices based on where they think the market is [and] are often reluctant to set their prices too low,” Marr said.

So for sellers, prices are a little stickier, he added, and slower to come down.

But even if it took a while, it’s finally happening.

After all, mortgage rates are at multi-decade highs, with the 30-year trending steadily above 7% as of Friday afternoon, according to Mortgage News Daily. And that’s likely to go up even more, as the 10-year Treasury note
TMUBMUSD10Y,
4.023%,
is trending above 4%.

Meanwhile, Redfin said that the median home on the market was listed at over $367,000, up 7% over last year.

The monthly mortgage for that home at the current interest rate of 6.92%, according to Freddie Mac, is $2,559.

Sellers are dropping their prices by 4 to 5% on average, Marr said.

“You would almost expect it to be a lot worse,” he added, given how quickly rates rose and eroded buying power.

But buyers and sellers are also using two different tactics to get some relief on mortgage rates, Marr said.

One, sellers are reaching out to buyers and offering concessions to buy mortgage rates down.

In other words, sellers are asking buyers to pay the full asking price, but proposing to use part of that as a concession to get buyers a lower interest rate on their mortgage.

“Which is essentially a price drop,” Marr said, “it’s the same thing … but it doesn’t necessarily show up in the data.” And it’s hard to get a sense of the magnitude of how this is playing out, he added.

“5% isn’t very bad, and it might seem like a lot of money, but … chances are you’re going to be incentivized to refinance [in the future] and you’ll have to pay the closing cost on that loan to refinance, which could be upwards of 15 grand,” Marr added.

Buyers are also switching to adjustable-rate mortgages, which offer lower interest rates at the start of the term. ARMs are nearly 12% of overall mortgage applications, the Mortgage Bankers Association noted on Wednesday, which is high.

Where prices are falling

As to where prices are falling, a couple of places stood out to Redfin.

They said that home prices fell 3% year-over-year in Oakland, Calif., and 2% in San Francisco. New Orleans also saw a 2% drop.

“Even in Atlanta, or Orlando, we’re seeing buyers backing out,” Marr observed.

So with the backdrop of sellers finally dropping listing prices, if you’re a buyer right now, don’t be spooked by rising rates and stop looking, he advised.

“There have been opportunities when rates really came down and gave buyers the moment to jump back in and get some good deals on homes that did drop their prices,” he said.

Plus, “it doesn’t hurt to make a low ball offer,” Marr added. “Some sellers are desperate, and that can be a good strategy … we’ve heard from some of our own agents that some buyers are getting incredible deals right now.”

But if you need to rent for a year and wait for things to calm down, then do that, Marr said, and bulk up those savings for that dream home.

Got thoughts on the housing market? Write to MarketWatch reporter Aarthi Swaminathan at [email protected]