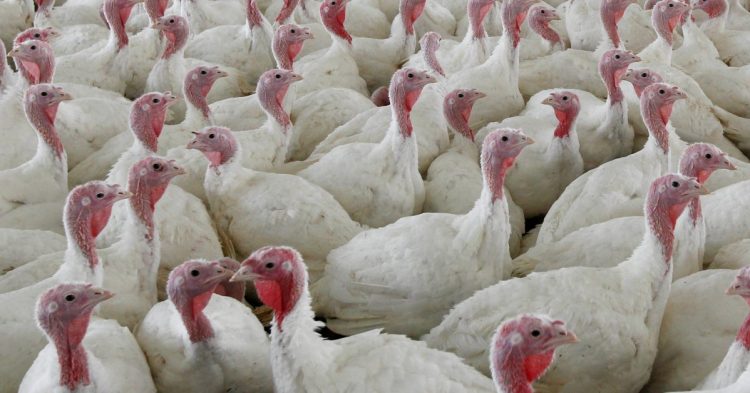 DES MOINES, Iowa — The U.S. Department of Agriculture on Friday proposed sweeping changes in the way chicken and turkey meat is processed that are intended to reduce illnesses from food contamination but could require meat companies to make extensive changes to their operations.

Despite decades of efforts to try and reduce illnesses caused by salmonella in food, more than 1 million people are sickened every year and nearly a fourth of those cases come from turkey and chicken meat.

As it stands, consumers bear much of the responsibility for avoiding illness from raw poultry by handling it carefully in the kitchen—following the usual advice to not wash raw chicken or turkey (it spreads the bacteria), using separate utensils when preparing meat and cooking to 165 degrees. The USDA’s Food Safety and Inspection Service wants to do something about it by starting with the farmers that raise the birds and following through the processing plant where the meat is made.

Their food poisoning target: Of the more than 2,500 salmonella serotypes, the Centers for Disease Control and Prevention has identified three that cause a third of all human illnesses from chicken and turkey products. The agency proposes limiting the presence of these on poultry products.

The USDA estimates the total yearly cost for foodborne salmonella infections in the U.S. at $4.1 billion, which includes the cost of doctor and hospital visits, recovery and premature deaths.

In 1994, the USDA’s Food Safety and Inspection Service took a similar step by declaring some strains of E. coli a contaminant in ground beef and launched a testing program for the pathogen which has significantly reduced illnesses from the meat.

In an effort to curtail salmonella outbreaks in poultry, the agency is proposing a regulatory framework that would include testing incoming flocks of chickens and turkeys for the bacterial disease that commonly affects the intestinal tract and affects 1.3 million people annually with symptoms that may include diarrhea, nausea and vomiting which could last for several days. Officials hope testing chickens and turkeys before they enter the slaughterhouse will encourage farmers to adopt practices that reduce the bacterial infection on the bird before they reach the point of meat processing.

A second measure would require enhanced monitoring for salmonella during processing by adopting sampling for the bacteria at multiple stages inside the processing facility. The third major change would be to establish a maximum level of bacterial contamination allowed and possibly limiting the three specific types of salmonella that can make people sick. Meat that would exceed the limits or that would contain the types of salmonella prohibited could be withheld from the market.

The USDA says there are about 3,000 federally inspected plants that slaughter poultry but about 220 produce the vast majority of poultry products. The agency said it is difficult to say at this point how many would be affected by the future rulemaking.

The FSIS will begin a lengthy process of proposing new rules by holding a public hearing on Nov. 3 to get input from the poultry industry and others. The government’s goal is to come up with new rules and regulations that could be rolled out beginning next year and completed within two years.

The agency said it is taking its time to roll out these ideas and get input before establishing firm regulations. The agency hopes to begin rulemaking in mid-2023 and complete it in two years, said USDA Deputy Under Secretary for Food Safety Sandra Eskin.

“We know this is quite a pivot from where the agency has been historically and for that reason we’re trying to be as transparent and deliberative and collaborative as possible,” Eskin said.

Consumer advocates have pushed for such action on poultry products for years. Eskin said the administration of President Joe Biden is pushing to make the changes.

Seattle-based lawyer Bill Marler, one of the nation’s leading lawyers to represent consumers sickened by food sources applauded the agency’s action which recognizes that controlling salmonella on animals before they reach processing plants is crucial to reducing meat contamination. He said FSIS should be bold and deem salmonella is an adulterant—a contaminant that can cause food-borne illness—in all meat as a starting point.

“What they’ve outlined is something that’s really unique that they have not ever done before but it doesn’t have a time line and doesn’t have regulations attached that would show it’s actually going to be accomplished. That’s my criticism,” he said.

The industry has been unable to meet government targets for reducing food-borne salmonella infections for a couple of decades. Meeting the new target set for 2030 of 11.5 infections per 100,000 people a year would require a 25% reduction, Eskin said.

Eskin said the industry has managed to reduce the number of chicken samples contaminated with salmonella by 50% from 2017 to 2021, but the rate of salmonella illnesses over the last two decades has not significantly declined. More than 23% of foodborne salmonella illnesses are attributable to poultry consumption with nearly 17% coming from chicken meat and more than 6% from turkey meat.

“We are encouraged to see FSIS is going through the regular rulemaking process. We look forward to reviewing the proposal and providing comment from the industry,” said Julie Anna Potts, the group’s president and CEO.

A spokeswoman for the National Chicken Council, which represents the companies that raise and process chickens for meat said they support efforts to reduce salmonella on chicken products.

“We are concerned that the proposed framework currently lacks industry input, research and data to support it,” said Ashley Peterson, senior vice president of scientific and regulatory affairs for the group.