All the Must-See Shows, Fairs, and More 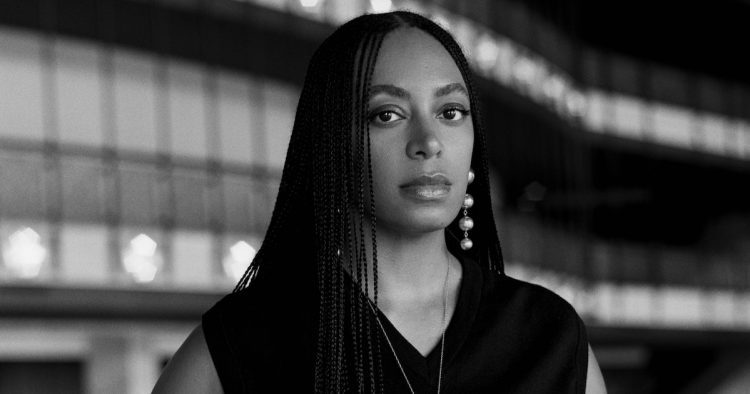 Not everything feels “normal” just yet, but this autumn’s fully packed arts calendar certainly does. And the spate of shows like a restaging of a monumental Diane Arbus retrospective and screening of Meriem Bennani and Orian Barki’s delightfully kooky lizard videos that opened in September were just the beginning: October will see Alex Katz mark a career milestone with a takeover of the Guggenheim Museum, Paris host its first-ever Art Basel, and so much more. Here, a guide to all the goings-on you’d do well not to miss.

Many have gotten the opportunity to see Arthur Jafa’s Love Is the Message, The Message Is Death, a seminal video portrait of Black America that went viral when more than a dozen museums co-streamed it in the wake of the murder of George Floyd. The White Album, an arguably equally important Jafa video, on the other hand, has been difficult to track down since it won the prestigious Golden Lion at the Venice Biennale in 2019. Finally, the video has made it to the U.S. The collage of original and found footage exploring whiteness is screening in America for the first time from September 1 through October 16 (Wednesdays-Sundays) on W. 125th St. in Harlem.

“Objects of Desire” at LACMA

Fine art and commercial photography have long existed in tandem; in fact, the latter made Andy Warhol into who he is today. From September 4 through December 18, the Los Angeles County Museum of Art will delve into how photo-based artists such as Barbara Kruger, Hank Willis Thomas, Roe Ethridge, and Sarah Charlesworth have manipulated the visual language of consumerism in “Objects of Desire: Photography and the Language of Advertising.” The “Stock Photography” and “Humor” sections promise to be particularly amusing. 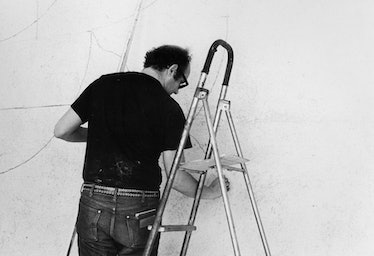 Sol LeWitt’s monumentally scaled wall drawings and structures are just something you have to experience in person. Paula Cooper first introduced them to the world in 1968, and from September 9 through October 22, she’s set to put them back on the map by devoting her two New York galleries to the late conceptual artist’s colossal works.

© The Estate of Diane Arbus 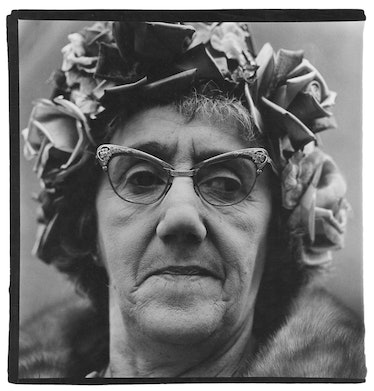 A half century after Diane Arbus’s monumental retrospective at the Museum of Modern Art, David Zwirner and Fraenkel Gallery are reviving the exhibition by reuniting all 113 photographs on its checklist. On view from September 14 through October 22, “cataclysm. The 1972 Diane Arbus Retrospective Revisited” is a look back at how one single museum showing proved the public that photography merits the status of fine art. 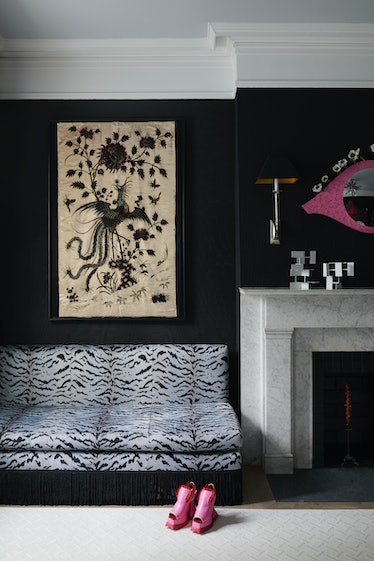 With Elsa Schiaparelli as her imaginary client, Tara McCauley has converted the primary bedroom, dressing room, terrace, and hallway of the Brooklyn Heights Design Showhouse into a tribute to Surrealism and its influence on the late designer’s legacy. The interior designer has incorporated Schiaparelli’s signature hue of Shocking Pink into her typically monochrome color palette via pieces from her personal vintage collection and commissioned artworks, all of which are on view from September 23 through October 30. 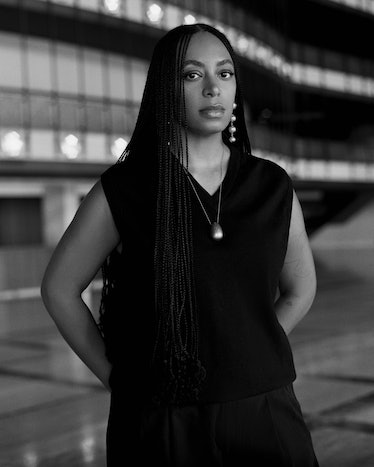 Listening to Solange Knowles’s new music won’t be as easy as pulling up Spotify. But it’ll no doubt be worth the trek to the New York City Ballet to hear the score it’s commissioned to accompany Gianna Reisen’s choreography. Following its premiere at the NYCB’s annual fashion gala in front of a crowd including Knowles’s sister, Beyoncé, the performances will take place on October 8, 11, and 16 and start up again in May of 2023.

“2 Lizards” at the Whitney Museum of American Art

We’re all beyond tired of talking about life amid lockdown. And yet, trust me: Meriem Bennani and Orian Barki will make you want to revisit that era again and again and again. At the time, most artists were participating in what quickly became known as OVRs—“online viewing rooms,” which are exactly as static compared to IRL showings as they sound. The Moroccan artist did something entirely unlike anyone else: She translated the public’s uncomfortable feelings into surreal dispatches from a duo of amphibians we hope to see much, much more of after the September 30 – February 2023 run of “2 Lizards.”

“Just Above Midtown” at the MoMA 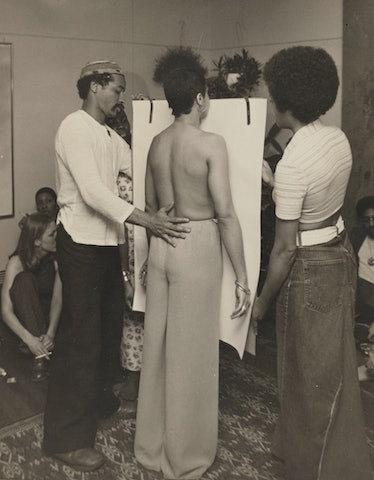 If this is the first time you’re hearing about the erstwhile gallery Just Above Midtown, you aren’t alone. Its enormous influence has been woefully overlooked in the decades since Linda Goode Bryant turned it into a hub for Black artists from 1974 until ‘86, making the tribute on view at the Museum of Modern Art on view October 9 through next February long overdue. The exhibition’s organization is loosely chronological, beginning with Bryant’s mission to “present African-American artists on the same platform with other established artists” and following how it became a collaborative, experimental breeding ground for David Hammons, Lorraine O’Grady, and more over the next dozen years.

Cecilia Vicuña at the Tate Modern

Photograph by David Heald; courtesy of the Guggenheim 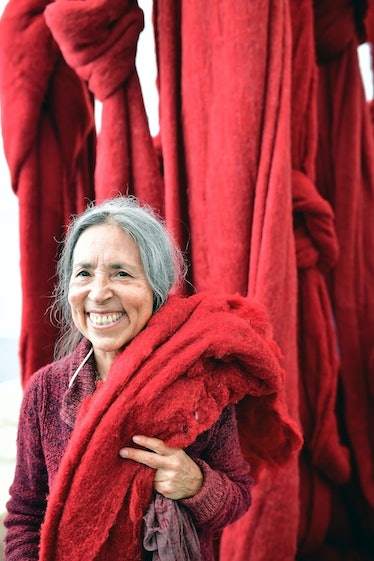 Artist takeovers of the Tate Modern’s Turbine Hall have yet to disappoint in the 22 years since Louise Bourgeois inaugurated the annual commission. And when she follows in the legendary artist’s footsteps from October 11 through next April, Cecilia Vicuña—whom the Venice Biennale awarded the Golden Lion for Lifetime Achievement earlier this year—will no doubt uphold that tradition. The Tate Modern has yet to release much in the way of details about the installation, but we’re going to guess that it’ll be comprised of some of the Chilean artist and poet’s most ambitious textile sculptures yet.

Gisèle Vienne at the Brooklyn Academy of Music 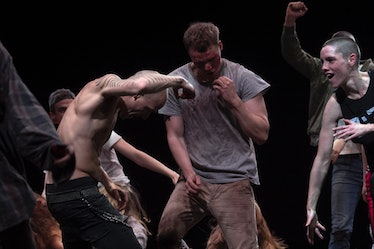 You’ll have just three days—October 13, 14, and 15—to catch the artist and choreographer Gisèle Vienne’s can’t-miss dance interpretation of what she’s described as the euphoria of a night spent getting lost in the crowd. Inspired by her experience clubbing in Berlin just after the wall dividing the city’s East and West fell, “CROWD” features 15 dancers letting loose at a rave. The three-night run is the latest highlight of Dance Reflection, an initiative that the luxury jeweler Van Cleef & Arpels launched in the fall of 2020. 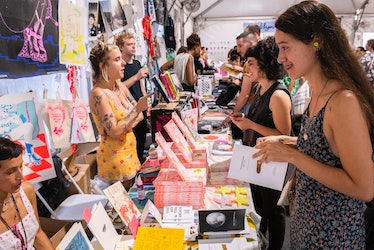 Printed Matter is bringing back the beloved New York institution that is the NY Art Book Fair from October 13 through 16. This year’s will take place just around the corner from the bookstore, at the same venue where the NYABF first launched in 2006. (“An Incomplete History of Printed Matter’s Art Book Fairs,” an accompanying offsite exhibition, is also just down the street at Chelsea’s Hauser & Wirth.) As usual, the offerings from small publishers, artists, and galleries will be accompanied by a series of programming—and perhaps the most exciting part is the fair’s first block party on October 15. The daylong lineup of activities includes a revival of the Taco Bell Drawing Club in remembrance of its late founder, the illustrator and Every Person in New York author Jason Polan. 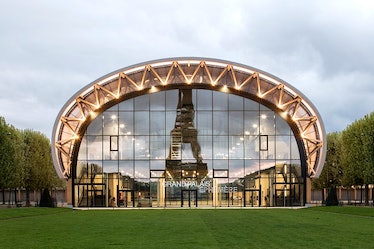 It’s hard to believe that two decades after Art Basel began branching out from Switzerland, the mega art fair has yet to choose Paris as one of its satellite locations. That changes on October 20, when the newly created Paris+ will take over the Grand Palace Éphémère for four days of what’ll amount to billions of dollars of art-related purchases. (You better check out the exhibition space, which is located in the 7ème arrondissement, while you can; a demolition is planned for when the Grand Palais finishes its renovation for the 2024 Summer Olympics.)

Alex Katz at the Guggenheim 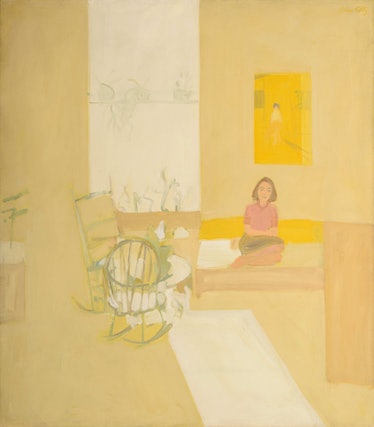 Is an eight-decade spanning solo exhibition of a living—not to mention iconic—artist possible? Somehow, yes. From October 21 through next February, the Guggenheim will give Alex Katz the massive retrospective in his hometown of New York that he’s long, long deserved. Titled “Gathering,” the show begins with sketches of MTA riders that the 95-year-old artist made back in the 1940s. Prepare to rue the fact that he turned around 1,000 of the paintings he made in the decade that followed into kindling even further. 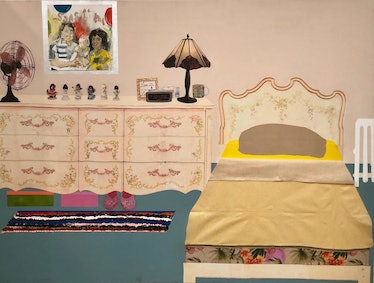 Back in the 1990s, the Chicana scholar and critic Amalia Mesa-Bains introduced the theory of domesticana, a Chicana feminist theory about working-class women within the context of the domestic sphere. Now, Mesa-Bains and six additional intergenerational artists are giving it an update through the lens of Latinx intersectionality. On view October 27 through next March at El Museo del Barrio in Upper Manhattan, “Domesticanx” is a survey of their responses to Mesa-Bains’s call to “undo the wounds of patriarchy and colonization.”

Méret Oppenheim at the MoMA

Photo via the Museum of Modern Art, New York (purchase) 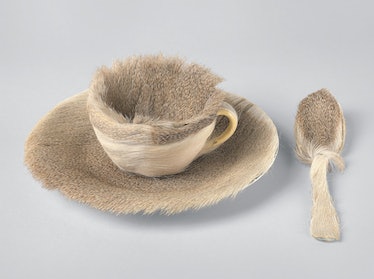 Iconic as it may be, it’s hard to believe that it took Méret Oppenheim’s 1936 sculpture Object (Le déjeuner en fourrure) for New York City’s Museum of Modern Art to acknowledge that artists who happened to be women could be well worth including in its permanent collection. Eighty-six years later, the institution is finally giving the German-born Swiss Surrealist artist (who died in 1985 at age 72) her proper due. From October 30 through next March, the institution will mount “My Exhibition,” a sprawling retrospective that spans six decades of Oppenheim’s work. In doing so, it proves that she was so, so much more than the teacup, saucer, and spoon entirely enveloped in fur that remains the only reason many know her name.

Photo by Paul Quitoriano for ‘W’ 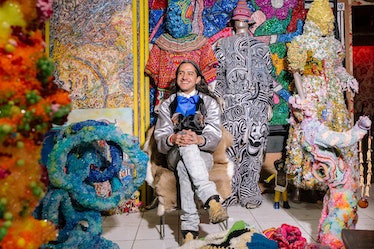 Just in time for Miami Art Week, Nina Johnson is mounting a solo exhibition of Raúl de Nieves’s signature bead-filled sculptures. The Mexico-born, New York-based multimedia artist’s latest come tinged with nostalgia: He’s added reproductions of torn scrapbook pages and DIY posters from his youth to his arsenal of materials, which per usual include thousands upon thousands of beads. The show, which also includes a new group of paintings, opens a day into Miami Art Week on November 28.

This article was originally published on 08.26.22