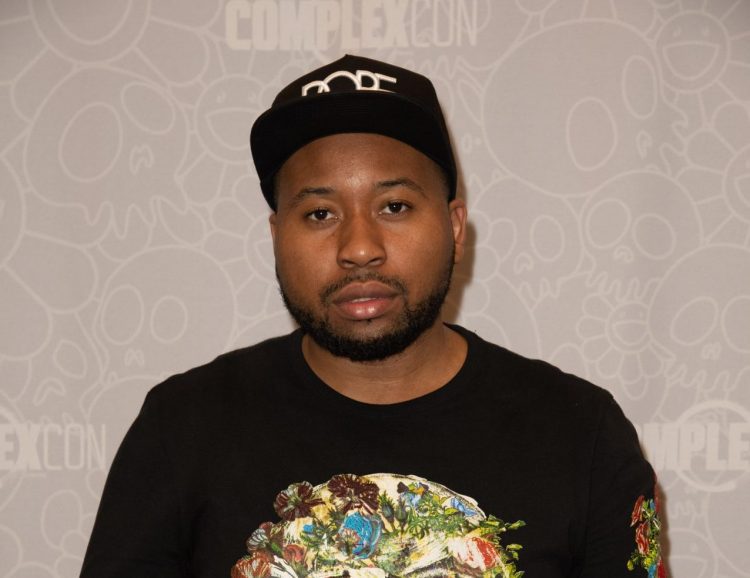 DJ Akademiks landed in questionable waters when he allegedly decided to take control of his girlfriend’s behavior.

On Thursday (October 13), Akademiks was a trending topic on social platforms for a video of him aggressively addressing a brunette woman in public. The woman’s identity was unclear at the time, but he later claimed she was his girlfriend. In the clip, Akademiks was seen shoving the brunette into a wall while he stood in front of her yelling.

Here’s What The Viral Video Shows

Amid his yelling, Akademiks bragged, “I’m the prize,” –unintentionally soliciting backlash for the phrase online. Meanwhile, he kept a red-haired woman at bay. The woman, later identified as his girlfriend, took off Akademiks’s hat at one point and threw it across the floor. Near the end of the clip, the host stormed off-camera while continuing to yell about being “the prize.”

Though there was plenty of opportunity for a physical fight after Akademiks walked away, both women kept their hands to themselves. However, when the host was between them again, the brunette swung a punch at the red-haired woman.

Caught in the literal middle, Akademiks seemingly tried to keep the women apart by guarding his girlfriend against the wall. Meanwhile, the red-haired woman threw punches from behind him–grabbing the brunette’s hair at one point. Then, a second woman ran up to the altercation from off-camera and began to throw punches at Akademiks’s girlfriend from whatever angle she could sneak them in.

Akademiks is such a character pic.twitter.com/9MfrzUXf8H

DJ Akademiks Steps Into The Shade Room To Explain Video

After The Shade Room shared the altercation video, DJ Akademiks offered an explanation in the comment section. He claimed his girl “was drunk” and mad about women approaching him at a party for pictures.

Then, the host gave another exclusive explanation of what occurred in The Shade Room’s comment section.

“I was breaking up a fight. My girl was drunk and being aggressive with other women cuz they were coming up to me in a party taking pics,” he wrote. “One of the girls swung on her and that’s where this video starts I’m tryna get women to chill out. But they ain’t listening. They fighting over pics n sh*t.”

Akademiks also exclusively told TSR that he initially separated his girlfriend from another woman after she was pinched. Then, he went live on social media to further explain the situation.

“At the end of the day, even if my chick is disrespecting me, and wildin’ out in public–granted, she was drunk–you don’t want nobody to jump your girl,” he said. “But also, I can’t hit nobody. I can’t hit the other girls, I gotta just be like ‘yo chill, let’s kinda break it up.”

Despite the physical aspect of the viral clip, social media users were cutting up toward the host. People called him out for claiming to be a prize, but also for inserting himself into a female fight. Keep scrolling to see the online commentary!

Akademiks and them Fresh and Fit niggas lame as hell.. All they do is talk crazy to women but that’s what happens when insecure niggas that were bullied and prob never got girls get a lil money and power. You’ll never see them sit and talk crazy in a real nigga face..

Not gonna lie DJ Akademiks on that fresh and fit podcast a few days ago was mad cringe and then for him to follow up with the way that he was acting in the hallway with that woman is fucking crazy. What makes it worse is that his tone is different with men

Fighting over DJ Akademiks is some special Ed shit

Everyone is talking about DJ Akademiks saying that ‘he is the prize’ in that video.

Y’all better understand the dating game now (for many women) is about who has resources/status.

Look up hypergamy… that’s what many women are today…

And they should be.

I’ve never heard a grown man scream “I’m The Prize” until today and it was done by Akademiks 🤣🤣. Whooo that boy 🤣 pic.twitter.com/jEos03S0SM