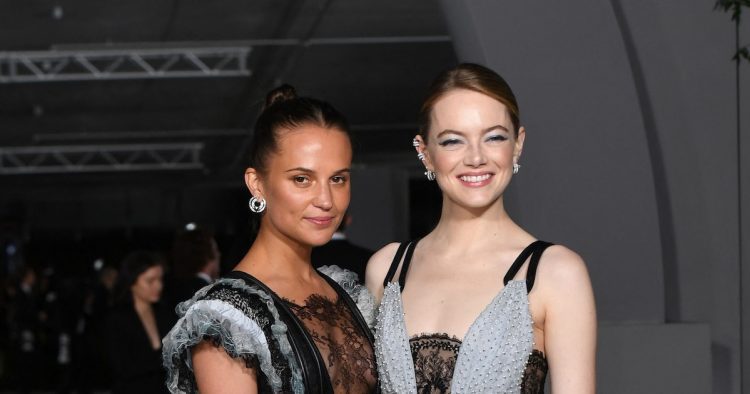 Emma Stone and Alicia Vikander already belong to a few of the same elite groups: They’re both Louis Vuitton ambassadors, Millennial actresses who won an Oscar before they turned 30 and, more recently, happily married new mothers. But the duo apparently decided they needed a girl’s night out, and walked the red carpet of the Academy Museum Gala in Los Angeles tonight arm-in-arm—wearing coordinating dresses.

The dresses, of course, are both from Louis Vuitton (to make the point even more clear: Stone and Vikander were joined on the carpet by Vuitton’s creative director Nicolas Ghesquière). Specifically, they’re both from the spring 2023 collection shown during Paris Fashion Week, just 11 days ago. In fact, the dresses emerged onto the runway one after the other, making clear the designer intended them to be stylistically similar.

While both are black and grey, Vikander’s dress emphasizes its constructed power shoulder with a décolletage covered in a sheer lace panel. Stone’s, however, puts her shoulders on display.

What really pushes the moment into “variation on a theme” territory is the similarly minimal makeup and slicked-back updos both Oscar winners wore.

Of course, it would make sense for Ghesquière to accompany two Oscar winners to the gala. The museum itself is the project of the Academy of Motion Picture Arts and Sciences. The Gala is now in its second year.

Inside, guests honored award recipients, including Julia Roberts. If Stone gets antsy in her seat, perhaps she can sneak off to visit another one of her looks; the yellow frock she wore in La La Land is part of the museum’s permanent collection.